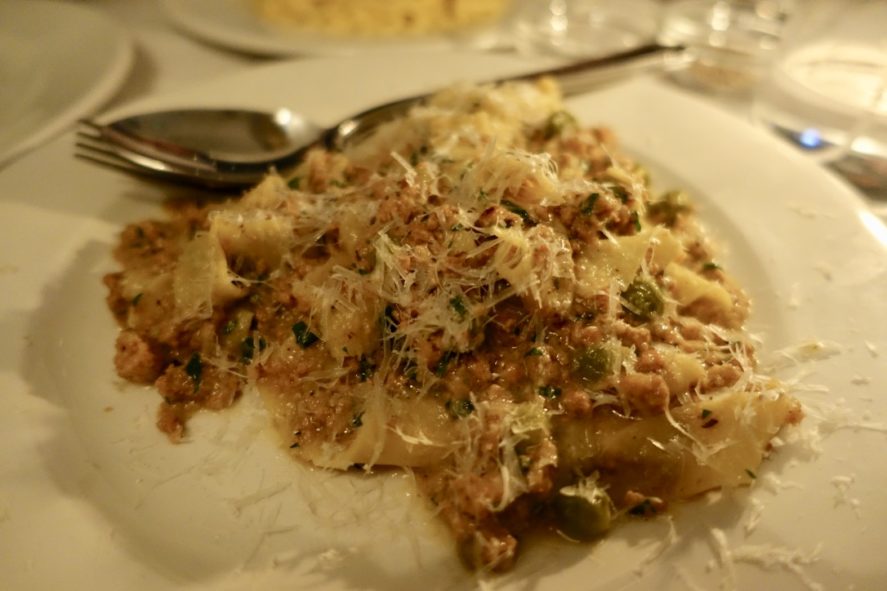 Trullo the Italian job of North London has been around since June 2010. It’s run by Jordan Frieda, an alumni of The River Cafe, he joins forces with chef Tim Siadatan – an early disciple at Jamie Oliver’s now defunct Fifteen. They also have Padella in Borough which I’m yet the visit. They named their restaurant after a Apulia dry stone hut with a conical roof, a style which defines the Itria Valley. Inside you get a bistro-feel, wooden chairs, a semi open kitchen and a space that seats 40. You’ll also get old school paper tablecloths – I’ve not seen them since my folks ran a restaurant, they retired over 10 years ago now. As a whipper, I used to doodle on them and grew to love scrunching them up as a waiter after a service – it was one of the satisfying virtues of being on the job. I’ve never had so much sentiment over paper table cloths.

We start with a carafe of the Ivag 2015 £22.50 which was cleansing and fresh. We paired it with their rather good sour dough which came without charge and is baked in-house.

First up from the antipasti came the charcoal-charred quail £9 that came with a good coating of umami laden anchovy sauce. It was cooked to a perfect doneness with a hints of pink on the inside. I gnawed it to the bone, which is the proper way of doing it.

Seabass carpaccio £10 came with warm and inviting burnt caper dressing, the evocative sauce to the elegant fish. It was the sea on a plate.

Grilled asparagus with hot butter and parmesan £9 was fine too, albeit wallet singeing for your troubles.

Tagliarini £7 with black pepper and parmesan was soft and positively simple. Pasta cookery is clearly a strength here.

Then came the tagliatelle with smoked eel £9 from the primi section. It had the right amount of cream and parsley ti make it luscious.

Best of the bunch were little slithers of fettuccine with the sweet-stew Middlewhite pork ragu £9. Grated parmesan and peas complete the dish.

Cornish monk fish £24 had amazing natural sweetness and a whip of wood from the charring. It was joined by a neat bundle of shaved hispi cabbage and tarragon sauce – the clams they were supposed to come with were absent from the mission as Elbert has a shellfish allergy.

The saddle of lamb £19 was stuffed and slathered with a manner of all things herbaceous and came with a slow braise of bacon and peas. This dish was vocal in comfort and had little else to wish for on a cold winters night.

To end the main courses, we had the pink and succulent black Hampshire pork chop £16.50 with stewed down Castalucchio lentils. The rustic pile of earthy salsa verde it was topped with lent acidic and fragrant grassy notes.

We finish on Nespoli almond tart £7.50, on appearance it looked to be on the parched side. In the end our table looked like a crime scene – the tart was left dismembered all over once pristine paper tablecloth. Death by spooning. The mere contact of our spoons shattered the gnarly topped desert all over the table and didn’t make it into our mouths. Perhaps it needed a little less oven time to make it less brittle?

Redemption came in the form of chocolate ice cream £4.50 which the 3 of us shared and enjoyed.

When did I go? Apr 2017
The damage: Expect to pay £80 per head with booze
The good: There’s lots to like at Trullo with their precision at the stove and the favour of fire. I found the food comforting, simple and nourishing all at the same time, sublime pasta cookery can be had too.
The bad: There were flourishes throughout the meal but it wilts at the end when the desert arrived – a shame really.
Rating: 3.5/5
Would I go again? It hasn’t happened yet..
Address: 300-302 St Paul’s Rd, Highbury East, London N1 2LH
Web: https://www.trullorestaurant.com