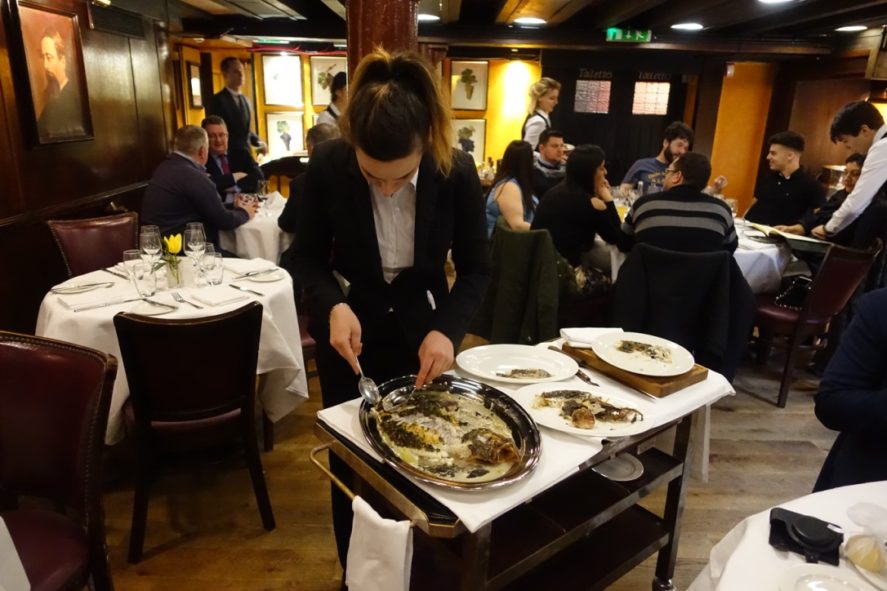 Since 1983, the Bleeding Heart has been serving bistro style French cuisine in their low ceilinged basement dining room. The restaurant’s name commemorates the dismemberment of the second wife of Sir William Hatton, Lady Elisabeth Hatton. I’ve read that her body parts were bestrewed on cobbled streets here on 27 January 1646, “torn limb from limb, but with her heart still pumping blood.” Thus the name. Sounds like a scene from Luther. Thankfully the restaurant’s mantra isn’t as morbid – their number is an “ideal venue for both an important business lunch (customers cross the City of London for its famed Cheeseboard) and for a romantic ‘diner a deux’ – it was voted by ‘The Times’ as the most romantic restaurant in London.” I couldn’t disagree with that as we were surrounded by pinstriped fat cats, some looked like they were with their mistresses. I came for a “lunch club”, sponsored by my employers at the time for being good.

Gavi di Gavi £38 was our weapon of choice for the day.

I went for the raviolo of pumpkin and butternut squash £11, it came with a shimmer of herby butter and crunchy pine nuts. The kitchen clearly has its eyes on a fail-safe combination, I can’t blame them as it was actually positively pleasant.

I didn’t try the other starters, but was informed that they were fine. Here they are in all their glory.

Naturally, I ordered the assiette of suckling pig £22. What I got was a roll of swine armoured in crispy pork skin that had the kind of snap that would be earsplitting in a tunnel. It was fully accessorised with sage & apricot faggots, pommes fondant (that’s mash potato), and Bramley apple sauce. I got a ballast of satisfying savouriness from the dark, full bodied jus. There was a panko crusted little trinket of pork too.

Roast venison came with pureed butternut squash, glazed chestnuts and five spiced red cabbage £26. I was told on good authority that it was good.

Roast rump of Suffolk lamb £25 – a ruby pink as it should be served had additions of glazed root vegetables, piped mash and Bleeding Heart rosemary jus. I had a bite which was pleasant enough.

For health reasons we ordered a side of spinach, new potatoes, a stack of rustically cut chips and a whole roasted turbot £56, and why wouldn’t you.

The turbot was fully dismantled expertly at the table for a compelling piece of entertainment – our waitress showed extra grace by spooning the cheek out for me too. If I was being finicky, which I will be for the sake of argument, the fish was overdone which meant it was parched, no amount of lemon or tarragon sauce could revive it. It had its best moments in the kitchen before it came to us.

The famous cheeseboard – eating cheese doesn’t feature in my repertoire, fill your boots if it’s in yours.

Hot chocolate fondant £6.95 is always an obvious choice, but a worthy one. Here it comes with caramelised orange segments and piped vanilla cream. However, just like the turbot it’s spent too much time in the oven, so what I got was a chocolate muffin. Not a “happy” inducing end right? So I asked them to change it for another..

Desert of the day was a cheesecake with shard of chocolate, a quenelle of chocolate delice and an assiette of raspberries.

When did I go? March 2017
The damage: Expect to pay £100 per head with glugs of wine
The good: There weren’t any duds here but there also wasn’t any majestic moments, and you’d expect it for a hundred quid. I would, and I mean this is the best possible way, expect this level of cookery in a gastro pub. Having said that, the assiette of pork was a cracker as was my raviolo.
The bad: The turbot needed less cooking and we were robbed in daylight for the meal. (Well at least if I paid). That’s without going into the duff deserts even if a fondant is easy to get wrong.
Rating: 2.5/5
Would I go again? Now it’s ticked off the list..
Address: Bleeding Heart Yard, Holborn, London EC1N 8SJ
Web: http://bleedingheart.co.uk