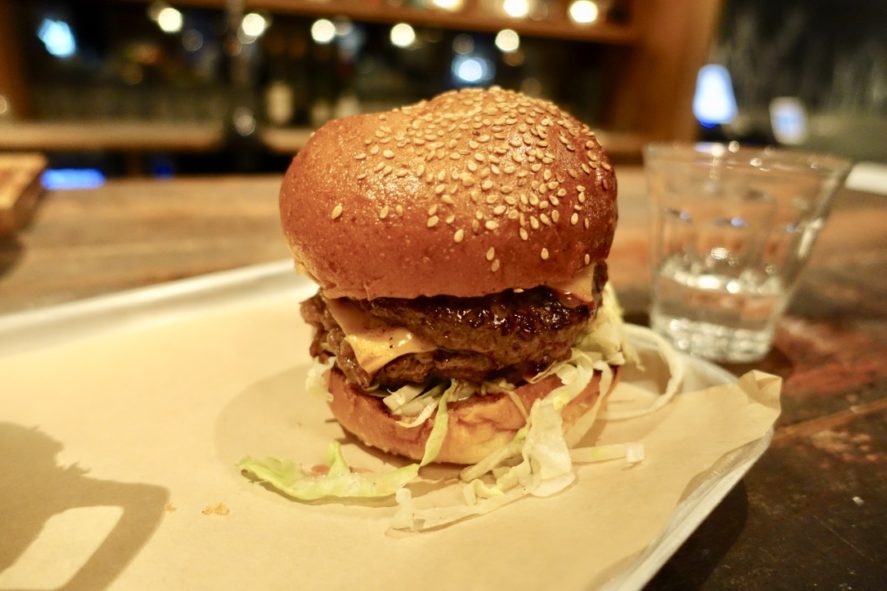 Mac and Wild Devonshire Square launched in November 2016, with a shtick to peddle Scottish game, cooked in a variety of ways from burgers (I’ll come back to that in a bit), Scotch eggs to lacing their mac & cheese with haggis. There’s a draught beer outdoor terrace that spills over onto the square when the sun rears its head; it’s in touch with it’s feminine side as presecco is available too. The basement with a virtual shooting range, in the same area which formally housed The Scotch Malt Whisky Society, they have an enviable selection of malts from some of the greatest distilleries of Scotland. Inside, it’s all about naked maroon bricks, dark wood, ox-blood banquettes and aged timber floors with matching tables.

Here is a view perched at the upstairs bar.

We kick things off with some of their fish bites £6 with zingy home made tartare sauce full of fragrant dill. The meaty flesh puffed out steam from its crispy shell when prised open. There is recommendation on the menu to have them with a Bruichladdich Port Charlotte but we chose to chug down Black Isle Draught which performed perfectly well.

The venison scotch egg £6.50 comes with a huge smear of nostril singeing English mustard that momentarily blinds but is all the better for it. The taste of game is both balanced and unctuous, working well against the textural crunch of the outer shell and the luscious yolk that trickled like a golden lake. They’re so pleasing that we ordered one each.

We also order heritage carrots £7 that came with as displayed, dukkah, créme fraîche and toasted seeds. It ended up being a terrible waste of time for us, the kitchen’s and everyone else involved. The wallet burning £7 for something that limped out of the kitchen drew high expectations. What we got were a meagre 3 carrots layered on top of each other with a dusting of seeds. My dining compadre usually has an unflappable demeanour and rarely complains, was the one who sent the the dish back. We weren’t charged in the end and quite rightly.

Haggis Mac and cheese £7 was a crispy topped oozing mass housed in its own skillet. As the same price of the carrots, by comparison we definitely got our money’s worth. It was a dish that we could be friends with, and you should too.

The Veni-Moo £10 is so called as the burger is an assemblage of not just venison but also a beef patty, seared so the exterior is a dark bark and the interior is still pink from the griddle before we inhaled it. There was also béarnaise, viscous American cheese and caramelised onions in a moist, soft yielding brioche bun. It got voted as London’s best burger once, I get it, it was genuinely really tasty and it was a burger that had me telling my mates about the next day.

I finished off with one of these.. £18 a dram. It would have been rude not to as coming here without having a dram is like having having a bacon sarnie without bread, it’s missing the point!

The kind bartender also gave me a drop of this wonderful stuff.

My most recent visit was a night out in their basement whilst the SMWS was still present, so of course it involved having generous glugs of whisky.

More fish fingers, albeit stingier portion sizes were given this time.

The scotch egg, with darker meat this time was a perfect snack to soak up all of the whisky we guzzled.

The mac and cheese was also all kinds of everything to help us with our booze pickled innards.

When did I go? Mar 2017, Sept 2017
The damage: Expect to pay £40-60 per head with drinks.
The good: Mac and Wild does what it sets out to do really well. The hearty-waist-thickening food is the sort of fodder that my soul calls out for like a fog horn on a cold winters night and it’s a welcome addition to some of the sombre choices in the City. What’s also note-worthy was the enthusiasm and knowledge of the staff when it came down to the whiskies, so it you’re a novice you’re in a safe pair of hands.
The bad: The carrots were a disaster, I’m glad I didn’t see them again.
Rating: 3.5/5
Address: 9A Devonshire Square, Spitalfields, London EC2M 4YN
Web: https://www.macandwild.com/mac-wild-devonshire-square