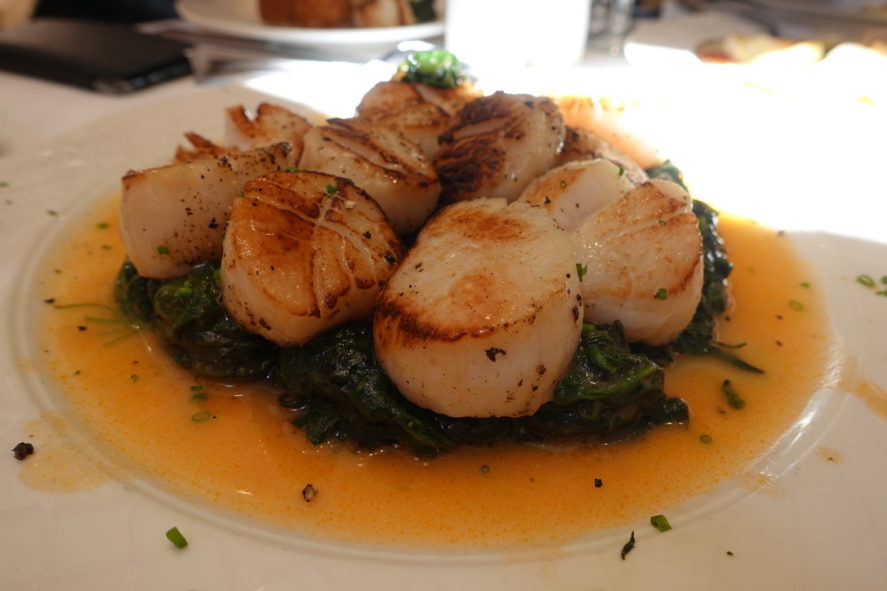 After a three-and-a-half-year hiatus (so shoot me), I returned to Signor Sassi. It’s the place where I so loved for its rustically hewn big-hearted Italian fare. It’s the kind of grub I love getting my chops around. Then there was “Dino”, our maitre’d, who I deservedly plugged for his killer charm and impressive wine knowledge, he retired and returned from brutal boredom that he found in rural Italy to join another part of the group. The walls are still famously decorated with framed photo’s of Dino and happily obliging celebrities posing with him. His embodying aura is still felt. In the grand scheme of things, three-and-a-half-year years isn’t a long time, and the memories I’ve had here are cherished, but however much I love nursing the good times, now is the moment to create a new one, I hope you agree. All of the pictorial evidence of my last visit can be seen here. And yes it’s an institution that has been rocking it since 1984.

The menu is still as long as the yellow pages.

“Augusto” our maitre’d. More on him later.

Tomato Bruschetta is the right bloody way to do a complimentary snack.

The table was lubricated with multiple bottles of compelling Barolo Oddero £54.50. The wine list is one of the most pleasing things here.

First came the truffled arancini £7.95 which arrived in a big puddle of custard yellow sauce – I presume that this is where they drop in a serious glug of truffle oil and heavy cream. I wasn’t convinced as cream sauces are just not for me, nor are these arancini which were like chewing the rubber off a school pencil.

The gamberoni Luciana £13.80 were tiger prawns with garlic, chilli and tomato sauce with a “touch of cream” as advertised – their touch is a ham-fished attempt as what we got was a huge ladle full, Italian mama style. They were gone in 60 seconds, did I tell you how I feel about creamy sauces? It didn’t matter as everyone else inhaled them.

Gamberoni Gorgonzola £12.95 (it’s good to see that the price remained the same since my last visit), was the tiger prawns with gorgonzola cheese that I heavily criticised during my previous visit. You don’t need me to tell you that cheese doesn’t go with prawns – I seemed to be wrong here though as they disappeared quicker than the 60 second dash it took for the other prawn starters to vanish. I managed to snap-up the last one and I was pleasantly surprised, but I reckon the got a piece with just chilli sauce on it.

Success came in the form of “capesante con spinaci” £13.90 (four portions in the pic) which were gorgeously caramelised scallops, they were the crowning glory on a bed of spinach in a pool of garlic, white wine and tomato sauce. Loads of eyeballs were on it before it even landed on the table – they stole the show and disappeared quicker than the prawns as did the beautifully sautéed bed of spinach.

Abbacchio Lagure (£22.50) was the beautifully trimmed baked rack of lamb with a red-wine-tomato-sauce and a herb crust of dreams. It was cooked to a perfect pink in the centre and was tender as can be. Visually, it’s still a thing to behold. I didn’t get to taste it this time as all that was left were the bones.

Spaghetti lobster £32.60 (up from £26) has stayed the best version of itself and is perfectly edible, I said it was punchy on the wallet last time, it’s even more so now, so just lean over and shovel it in to forget about the price.

Zitonni Toscanini (£14.90). ‘Long pasta tubes, favourite of the Maestro Toscanini, made with Tuscan spiced sausage, extra virgin olive oil, fresh tomatoes & Tuscan percorino’. It’s flipping poetry – I can’t see myself not ordering it when I come here, it’s a parade of everything I love in pasta.

Zuchini fritti £4.20 were tangled pieces of battered courgette – I always remember that the sides are strong here.

They give spinach £4.20 a good reason for existing too when they sauté it with chilli, Worcester sauce and olive oil. Eating greens this good is a virtuous thing that everyone should partake in.

Fries £3.60 with a shaving of parmesan are the sort that you get from your fast food burger joint, if you like those, you’ll like these.

Saute potatoes £3.95 were rustically cut fried spuds, they seemed to carry the theme of carbs on carbs on this table – but dodge them as they are a starchy-strait-laced bore.

Asparagi dorati £12.95 were shamefully overcooked asparagus with, from what I gather, a huge splodge of hollandaise sauce. I guess this is where the goodness ceases.

Your sauté spuds £3.95 can come with bacon too. If in doubt, add bacon.

Zitonni can make you gurn!

They always bring a type of crostoli at the end, they are lightest ribbons of fried pastry dusted with icing sugar. They are lovely but we had no room for them!

Augusto, our maitre’d this time is a keeper, he was full of anecdotes, impeccable charm and humour. My first interaction from him was a stern face, followed by a serious telling off for taking pictures – of course he was yanking my chain. My face did drop for a second until he cracked a smile!

My most recent visit was during December 2019…

Brunello has a propensity to be deep and full bodied, this lush col d’orcia £65 was no exception.

The ritualistic olives, tomato with bruschetta and parmesan which I can nibble on all night (easy tiger) goes hand-in-hand with a glass of the Brunello.

A plate of calamari fritti £15.95 randomly appeared but we weren’t complaining as the lightly batter coated were cooked to the right side of soft. In the end they’re good manners took off the bill anyway out of principle.

“Biscuit” our Italian brethren orders the half portioned paccheri ragu £7.75, he gives it a nod of approval – so do I after a mouthful.

Leon and Darren order the carpaccio £17.95, slithers of marbled pink beef, olive oil slicked rocket and more of that funky parmesan are chicly presented on a white plate.

I went for the capesanti spinaci £14.95, that’s scallops scorched till smokey and blackened on the edges. If you like scallops, spinach and tomatoe, let this be your call. I’ll probably keeping ordering it as I don’t do FOMO.

Biscuit and Darren order the salt baked sea bass £31.15 – if you’re after something delicate then this is it.

I went for the spaghetti lobster £34.60, it’s a Signor Sassi classic that deserves to be heard as it’s remarkable. The deeply flavoured lobster nuggeted tomato based sauce taste of slow reduction and cling to the spaghetti for dear life – it bears repeating that this dish deserves adulation.

Zucchini fritti £5 is probably one of the top sides to get along with the sautéed spinach.

The chips £3.95 are crisp and ostensibly out of place, but what the heck is Christmas.

There’s also a the new potatoes £3.95, a starchy bore that deserved a bit more love than to be served plain – that probably can said for the broccoli too £4.50.

When did I go? July 2019, Dec 2019 in case you missed the first appraisal, it’s here.
The damage: Expect to pay £60-£95 per head with wine.
The good: If Signor Sassi is campaigning for food that hits the soul in all of the right places then they have done it with conviction. There’s enough lick the plate good dishes to please most, from the seafood, the carne, the pasta and of course the enviable wine list. From this visit I’ve learnt that the zitonni and the feverishly good scallops “capesante con spinaci” are unmissable. I think I’ve mentioned that “Augusto” is already a legend.
The bad: The sides can be a bit of a bore as were the rubbery arancini.
Rating: 4/5
Would I go again? I’ll play the Signor Sassi card all day long
Address: 13-14 Knightsbridge, London SW1X 7QL
Web: http://signorsassi.co.uk