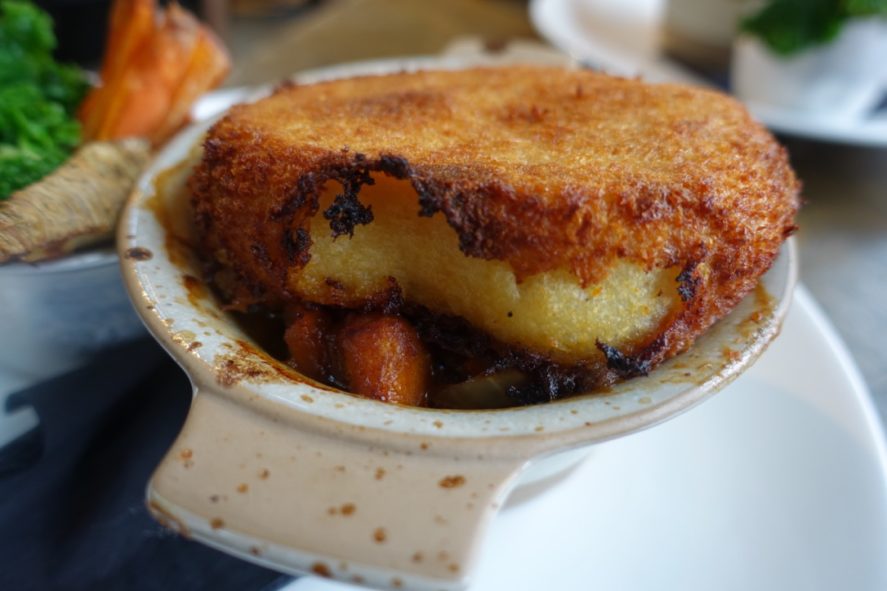 Truth be told The Kings Head wasn’t a fortuitous find I stumbled upon, I’m here visiting a mate who lives in the area. He suggested that this staunch landmark pub in Chipping – an olde-world part of town in Essex, full of narrow cobbled streets, not too far from the greenery of Epping Forest is the place to be. It’s a little way out where I’d like to play but I like itching the curiosity of untapped manors. I rad that it’s been around since 1679 and is the oldest brick-fronted building in Ongar. Inside the 100 cover boozer is a nice lounge made for loitering, an open fire and nearby bar sets the scene. There’s also a josper grill and wood burning pizza oven too. If like me, you see people watching as a spectator sport, you’ll notice the abundance of yummy mummies along with couples who might be their grandparents.

I was driving so only the finest juice will do.

Pork belly bites and crackling £4.50 with apple sauce is a snack worth seeking out here. They seem to be triple cooked so there give off this filling shattering crunch at first then they become soft and disappear, then you’d want to do it all over again.

“Saltimbocca scotch egg” £7 was a blend of sausage meat with prosciutto punched up with aromatic sage wrapped around a soft boiled egg. For good measure there is a slathering hollandaise on its crispy shell.

Pumpkin ravioli £6 is something a generally can’t resist and they do it good here. The sauce was a majestic thing of sweet chilli notes, crunchy hazelnuts and the perfume of sage through the nasal passage.

Seeing beef brisket cottage pie £14 on the menu was too inviting to ignore. The pie came in its own pot and was left to linger in the oven until the potato lid was a golden shade of brown. On paper the dish sold itself, but the stew within the pie lacked body and seasoning. The stalks of rosemary weren’t too appetising either. It was an “almost but not quite dish”. The vegetables that it came with only got a singe in the oven, but not a lot else – they deserved more love and seasoning.

When did I go? Feb 2017
The damage: Expect to pay £25-£30 per head with a drink.
The good: There are some majestic nibbles and starters here that can’t be missed such as the pork belly & scotch egg. The space itself is, with its rustic wood panelling and sunlight, is a good place to be. It’s worth sticking your nose in if you’re in the area.
The bad: It’s a shame that the main event took a wrong steer but it wouldn’t take that much effort to correct.
Rating: 3/5
Would I go again? It’s on my radar if I’m in the area.
Address: 177 High Street, Chipping Ongar, Essex, CM5 9JG
Web: https://www.kingsheadongar.co.uk