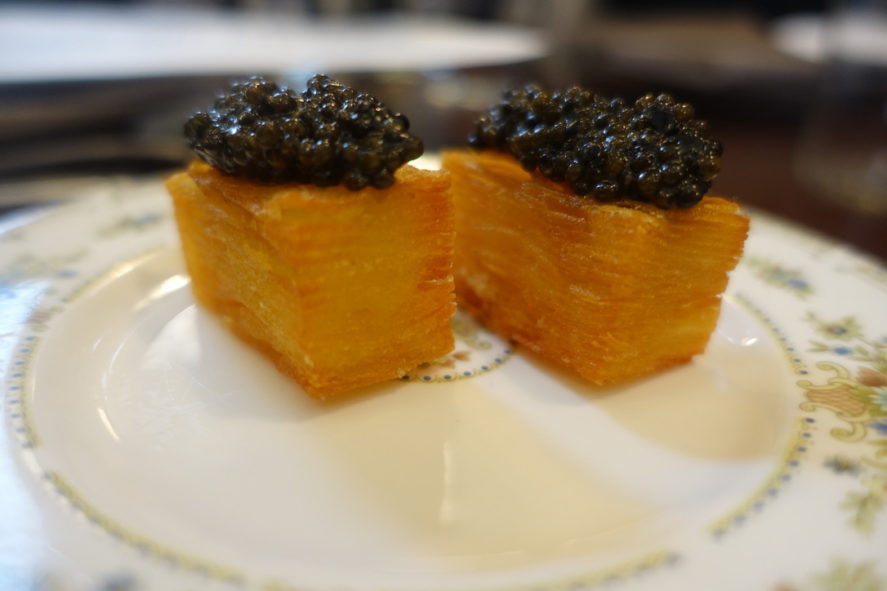 Any restaurant enthusiast will tell you that there are some really compelling restaurants emanating in the vicinity of Clerkenwell – the Quality Chop House which re-opened in 2012 after being renovated as much as their Grade-II listed credentials will allow, is, unquestionably a prime example of one. The premises has a heritage which harkens back to 1869 and is deep with character. You’ll get chequered tiled flooring, arse-deadening wooden pews and Victorian style decor. The meat produce comes from the adjoining butchers and the wine is supplied from a neighbouring shop too. Co-owner is Will Lander, who deserves a bit of smoke blown up his chimney as he also runs the charming Portland and Clipstone. I loved Portland more but Clipstone also gave happy moments. Quality Chop House on the other hand is a different beast entirely.

We start with a crumbled rye sour dough with cultured butter £3.50, its marvellous – anyone who reads my blog knows that I’m a bread perv.

Schiena and sopressa £9 for both fine examples of mouth dissolving Italian charcuterie , were off to a promising start.

Chicken hearts with thick like Nutella BBQ sauce £4 required some teeth clamping to pull the soft flesh off the sticks they were grilled on – it was a path to tongue coating deliciousness. Texture came from a carby crumb.

Chicken and wild garlic terrine and kernel mustard £8 came with hunks of moist brown meat and the flavour of mild funk. There’s evidence of reduced cooking liquor that turns in gelatine, holding the terrine together – we cut into the rustic slab where the dark and white proteins are clumped together. Paired with the crispy sour dough its a joy to eat.

Chicken livers £7.50 were concealed under a foliage of paper thin slithers of pear. The birds innards, cooked to a perfect pink in the middle were sweetened with prunes – bitter notes came from chicory and hazelnuts gave their texture. For good measure I believe they stuck some Jerusalem artichokes in there too.

Then when we thought things couldn’t get better, the nettle gnocchi £9 arrived with walnuts and tangy grated Cornish Yarg. The pool of butter and patches of vivid green nettle sauce seemed to hug all the other ingredients and of course hug our tongues.

Hereford mince on dripping toast £16 was the first of the mains. It was a slow braised reduction of red wine, beef stock, mirepoix and lots of love. The result is gutsy, heart-warming, sticky and is quite simply one of the best mince dishes I have ever eaten. Food like this should never leave the menu.

A side of confit potatoes £5.50 were equally satisfying – layers upon layers of crisp potato were a true labour of love and had this crunch that stayed with me until the next day.

Spring greens with mustard £4.50 was also a winning move.

This was followed by 1kg of ribeye £98 which came rare and it had all of the rich dry aged tang of what good beef should have. The crisp edges were nutty and particularly delightful.

Finally, we got a Barnsley chop £20 – each! But this is where they get things so right. The roasted chop was the colour of chestnut brown, locked and loaded with sweet flavours. The gamey, grassy nature of lamb was no where to be seen and even though we were stuffed to the brim, it demanded to be finished.

Visit number 2 involved taking the afternoon off with some nearest and dearest to gorge. I couldn’t resist a sneaky peek into the butchers.

Since it was my birthday, we ordered confit potatoes with caviar £16. I decided that these starchy delights are one of the main reasons why I’d come back here – I was put on Earth the eat this kind of food. Did you know I love confit potatoes?

The sour dough £2 was flawless too.

Also from the snacks were got whipped cods roe £5 which came with paper thin gnarly looking squid ink crackers that could easily have been something from Stranger Things. But actually, combined with acidic tang of lemon and pickled onion it was a mouthful of flavour.

First from the starters was the Brixham brown crab on toast; it was the colour of Terracotta, was moist and the umami rewards you like how the sweet white meat from the animal doesn’t.

Tamworth pork belly with chicory and burnt apple would suit a carnivore who loves the fat more than the flesh. I’m not one of those carnivores unfortunately.

From the mains I got the Hereford onglet steak. What I got was a whack of minerality, this often means the cow is from good stock and probably was on named terms with the farmer. The texture had the right amount of tension and was also equally as fun as the taste. Meat is clearly the restaurant’s strength.

Smoked haddock’s pearly white flesh slid apart like a fanned pack of cards. It was wonderful as were the trinkets of arancini, raisin sauce and roasted cauliflower.

It would have been rude not to.

Of course we had to get the Fallow venison mince on dripping toast with watercress. It’s the type slow cooking that makes me smile. As much as I liked it, I didn’t love it like the deeply beefy Hereford mince I had previously.

Peanut butter parfait were two pieces of dainty pastry, the top half crested edge to edge delicious soft brittle. (If there is such a thing as soft brittle). The sandwich filling was an off white coloured frozen cream which finished off the story.

Less compelling but not shabby was the “Pump Street” chocolate quenelle of sorts with texture pleasing malt and cacao husk. It had the right balance of bitter-sweet notes to stop it from being cloying.

The petit four of fudge was a nice touch too.

From the snacks we got some mackerel tails £2, which seemed like the kitchen was rummaging through the recycling bin to see what could be salvaged and rustled up with the scraps. It was a noble gesture, but pointless all the same.

Then from the starters we got a rewarding warm salad of tender cuttlefish £8 with browned edges. Acidity came from slinky hoops of spritely pickled onions, breadcrumbs gave their crunch and watercress gave their bitter notes.

Sweetcorn with marmite butter £5 is a ravishing combination – the chef somehow pulled off something I’d like try at home – much like the other dishes on offer here.

Dexter rump £28 (350g) was another flourishing moment – rump seems to be the second class citizen in the steak population, I disagree after eating this one.

Of course we had to get those multilayered profound confit spuds £5.50 – they are life-changingly delicious and crunchy in all the right places.

Parmesan polenta £16.50 came with a mound of woodsy Italian summer truffle and grated parmesan. The layers didn’t stop there was paper thin courgettes also featured as did a golden egg yolk.

Trifle £8 boasts the deepest raspberry flavour, custard with all the right vanilla notes, and roastie-toastie almonds on a thin layer of cream. It’s a desert capable of putting a grin on any pudding lovers face.

Madagascan chocolate ice cream £7.50 in a puddle of olive oil, came with a huge glob of peaked whipped custard was another marvel.

When did I go? May 2017, Nov 2017, Sept 18
The damage: Expect to pay £70/80 per head with drinks
The good: My admiration of this place seems to grow during each visit. I love the ever-changing menu, nice surprises seem to pop up, yet there is always a choice of chops or steak if you’re in a carnivorous mood. Hereford mince on dripping toast along with the confit potatoes should never leave the menu. (Hint, hint!).
The bad: As charming as the decor is, the arse-numbing seats might irritate your farmer Giles.
Rating: 4.5/5
Would I go again? You don’t need to ask me twice! I’m plotting another return already.
Address: 88-94 Farringdon Rd, Farringdon, London EC1R 3EA
Web: https://thequalitychophouse.com