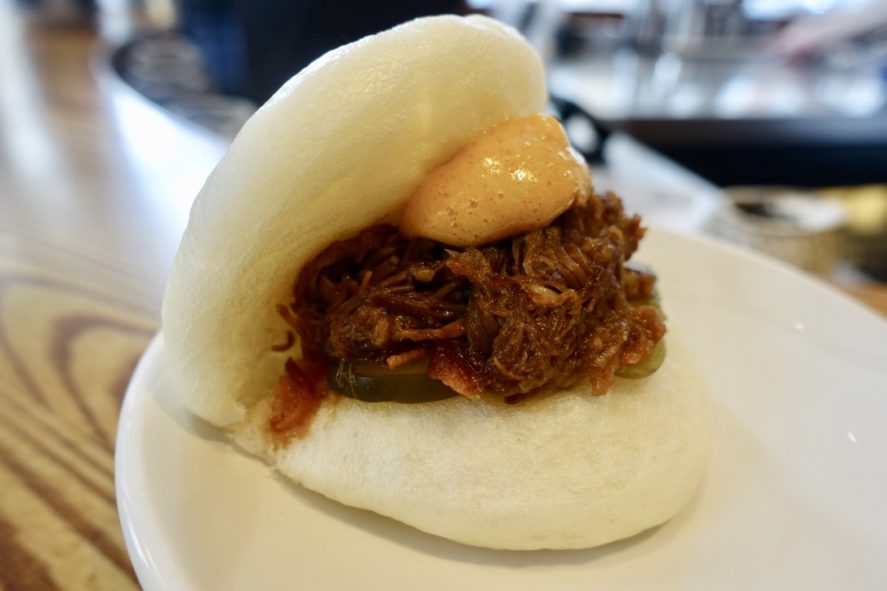 I’ve shouted about Bao Fitzrovia countless times before with great fondness and delight as they’ve been good to me for many reasons. I prefer the airy’er premises to their match-box sized Soho branch; I didn’t like the constant nudges in the back from the waitresses – I do have a big back though and they’ve been reliable for me. Not only that, I just didn’t think they were worth queuing for at Soho. Just like the other shops too, they offer a manner of exciting Taiwanese influenced edibles since the latter part of 2016 that are fun and make me happy. They also have a blonde wood horse-shoe-shaped bar which I love lingering on – but is it worth the effort and money spent? Read on and find out. I can think of worse ways to splash the cash thats for sure!

Here’s their sweet potato sour £9 – it was good, but you’re heading into cocktail bar territory with the pricing, which its not.

Taiwanese pickled cabbage £2.50 have the right balance of sharp and sweet, no inducement of sucking-on-a-lemon-faces with this one!

Pork bakkwa £5 was a fine mouth pleasing jerky that had all the savoury-sweet notes. There was a teeny pot with fermented chilli dip full of character too. I want to call it siracha as it tasted similar.

The confit pork bao £5 is filled with braised pork belly that gets a good searing. It’s then treated to a smothering of fire-brick coloured sauce and caramelised shallots. The carb which they’re so famous for here was all about bouncy squish and tasted like it was fresh from the steamer seconds ago. It’s a beautiful thing.

The succulent fleshed chicken chop with soy cured egg £6.50 is a welcome addition to any bao course here. It’s a mighty fine spice crusted thigh, expertly cut so the bone protrudes like a gear shifter and it gets more of that siracha-type sauce to mix with your cured yolk. It’s moist and crunchy in all of the right places.

The cod black £5 which is unique to this shop comes in an unnerving liquorice coloured hue. It can be mistaken for a lump of coal, but the squid ink coloured batter holds the pearly whites of the delicious flakey cod. I order it every time.

The sha cha squid steak £8.50 is a salute to all things umami. It had a nice chew too and tasted like a half-way house to jerky – but all in a good way. I’ve not seen this on the menu since, I wish they’ll bring it back.

Beef cheek and tendon nuggets £4.75 with its crispy-golden shell had a resonating crunch that housed an unctuous stew of the once stout parts of the animal, slow cooked with Taiwanese magic until it’s melting and sticky. You can’t leave the place without ordering them!

For desert we had this “peanut ice cream roon bing” £4.50 with herbaceous coriander. The wrapper was like a uncooked spring-roll pastry (I felt this as I used to roll them growing up). This alone with the ice cream would have been a refreshing treat, but with the added astringency of the coriander, it tasted strangely alluring, and my curiosity kept going back to it until it was all gone.

This visit involved dining with friends from Norway..

Cod black £5, looks like the unspeakable but tastes of the unbeatable!

Beef cheek tendon nuggets £4.75, it would be a crime against food if you didn’t order them, even if you’re vegetarian.

Here is their smoked eel with golden kimchi £6.50 – a full on funk of cabbage working really well with the robustness of the eel. I was expecting the two flavours to really compete with each other, instead the volume was tuned in a way that they complimented one another; the eel was not too salty or the kimchi was not too acrid.

When did I go? May 2017, Oct 17
The damage: Expect to pay £25/35 per head with a drink
The good: The bao is the obvious thing to go for and they do them very, very well here in comparison to the other shops, that’s just my opinion anyway. That said, the beef cheek tendon nuggets along with the chicken chop which could be unique to this shop are edibles that you need to go toe to toe with – go and see for yourself, everything is sublime.
The bad: I’d like to see the sha cha squid steak as a regular as it was a marvel, but I understand the need to change things up in the name of variety. Also the elephant in the room for me is the size of the bao vs what you get for your sterling, they can make them bigger for the price you pay, there I said it!
Rating: 4.5/5
Would I go again? Hell yes!
Address: 31 Windmill St, Fitzrovia, London W1T 2JN
Web: https://baolondon.com/restaurant/bao-fitz/