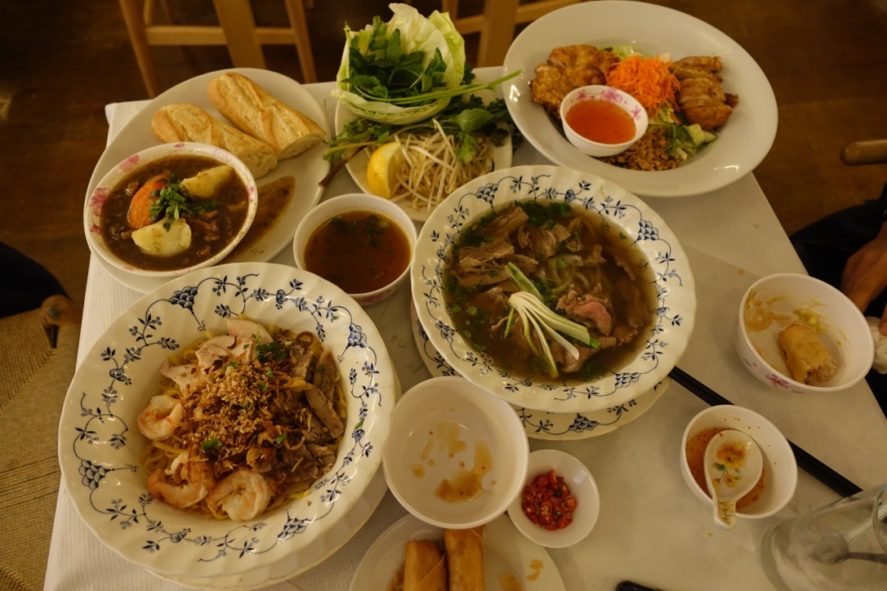 Cafe East is an brightly lit Vietnamese canteen that serves up a manner of stalwart dishes such as pho, a deeply flavoured beef broth filled with rice noodles shaped like ribbons. Slithers of raw beef feature too that cooks in the heat of the broth and comes with fresh trinkets of raw beansprouts and herbs. Other items worth a look are the rice dishes, which celebrate pork or crispy chicken, all have a separate bowl mouth puckering “nuoc cham” – a popular sauce of vinegar, sugar, fish sauce, garlic and chilli. They also do summer rolls, a stubby rice paper snack filled with vermicelli, protein and herbs, made to be dipped in a hoi-sin-peanut-butter-sauce. My favourite are the “banh cuon” filled with mince pork, which are akin to Cantonese steamed cheung fun, but have a chewier pastry. (I’ll come back to that later). They’ve been doing all of this since 2008 in an behemoth sized carpark shared with an Odeon and Hollywood Bowl.

We start with “che ba mau” £3.50, a tall glass of sweet kidney beans, strands of gummy green jelly and coconut milk with lashings of crushed ice. It’s clearly a desert, a bloody fun one at that, but ask them to bring it after your meal. Unless, you prefer pudding before starters. That’s just plain weird.

Here is their banh coun £5.50. I love the texture of the steamed pastry and when armed with the nuoc cham sauce it becomes a mouth-watering moment of the meal. It’s topped with mystery meat they call meat-loaf, but I guess that’s what it is, along with crispy shallots and the crunch of beansprouts. They are my favourite thing to eat here.

Bo kho £7.50 is a slow braise of brisket, potatoes and carrots. There have a conspicuous caresses of five-spice, garlic, ginger and fish sauce. The baguette is comes with is crispier, airier and sweeter than the French variety, not necessarily better, but just different. It is perfect for soaking.

We then get “pho chin” £7, which was deeply savoury and beefy. It makes itself heard from a slow simmer of beef bones, which the vermicelli and slithers of beef could nestle in. It’s a fine representation of what good pho is. There is always a side of chillis, beansprouts and aromatic herbs as accompaniments.

Then came “pho tai hue” £7, which presumably comes from the same stock pot, but gets an abrasive amount of chilli. The paper thin cuts of raw beef that bobs around on the top quickly turn pink to brown from the ripping heat of the broth.

Here are the “goi guon” £5 (summer rolls). Our choice of protein were prawns, but there is also a helping of their mystery meat within.

Less appealing was their “bi cuon” £5.50 which were a summer role of vermicelli and pork skin which had the same funk levels as my football boots in 1992 after 3 seasons. Don’t come here for these.

We were almost horizontal from overeating when the “com khau” £7.50 arrived which was an indeterminate piece of pork slow roasted until tender and gets a soaking in the dark brown spicy yet sticky cooking liquor it produces. Over-eating with my siblings seems to be common practice.

Finally came the “com suon bi cha” £8.50, which was a hefty meal of lemon grass pork chop, mystery meat pie and more of that funky pork skin – thankfully there’s plenty of nuoc cham sauce to drown out the stench.

“Che dau trang” £3.20 was a desert of sweetened black eyed beans with glutinous rice and a generous helping of coconut milk. It looked like a 6-year rustled this up, but it’s incredibly satisfying and provides temporary reprieve from some of the heat of the dishes.

The most recent visit..

We ordered the “che bau mau” £4 again but made the same mistake of not ordering it after the meal. Oh well.

An order “goi guon” £6 arrived. As nice as they are, they’re simply not a patch on the banh cuon which weren’t available. When we asked “why” our waiter said that the chef who makes them is on holiday for the foreseeable and they’re looking for a replacement?? Not having my favourite dish doesn’t necessarily enforce a bad time, but I couldn’t help feeling disappointed.

Shortly after came the “cha gio” £6.50 which were golden from the frier and filled with mince pork, carrots and glass noodles.

Of course we ordered some pho and went for the “pho chin” £8. This time though, the broth was limp and lacked the deep savouriness from my last visit and the noodles were textureless.

The “pho kho dac biet cay” £9 was a dry noodle of sorts that came with a bowl of bronze coloured broth, this added some much needed moisture to the prawns, beef and chicken it came with.

Bun gar nuong £8 was arguably a meal in itself and the average human would be satisfied with it. But no, not us. What we got was crisp skin-on chicken thigh; it was accompanied with a salad of vermicelli, shredded lettuce and carrot. Of course there was nuoc cham for pouring.

Between the two of us we crushed it.

When did I go? Sept 2012, May 2017.
The damage: Expect to pay £25/30 per head with drinks and lots of food.
The good: It’s hard to get this quantity, and at moments quality, so briskly delivered in London, it’s truly a feast from the East. There’s enough variety to please most and I hope you get a chance to try the ban cuon – come here for them and the pho.
The bad: I’ve not returned since their bang cuon chef decided to go absent without leave, I’m sure they had their reasons, but it sucked hard not having my favourite dish there. Trust me, it’s worth lamenting about. It’s also a little out of the way with nowt around the area for adults to be entertained, I wouldn’t call it a destination restaurant.
Rating: 3.5/5
Would I go again? Had no excuse to – yet.
Address: 100 Redriff Rd, Rotherhithe, London SE16 7LH
Web: http://www.cafeeastpho.co.uk