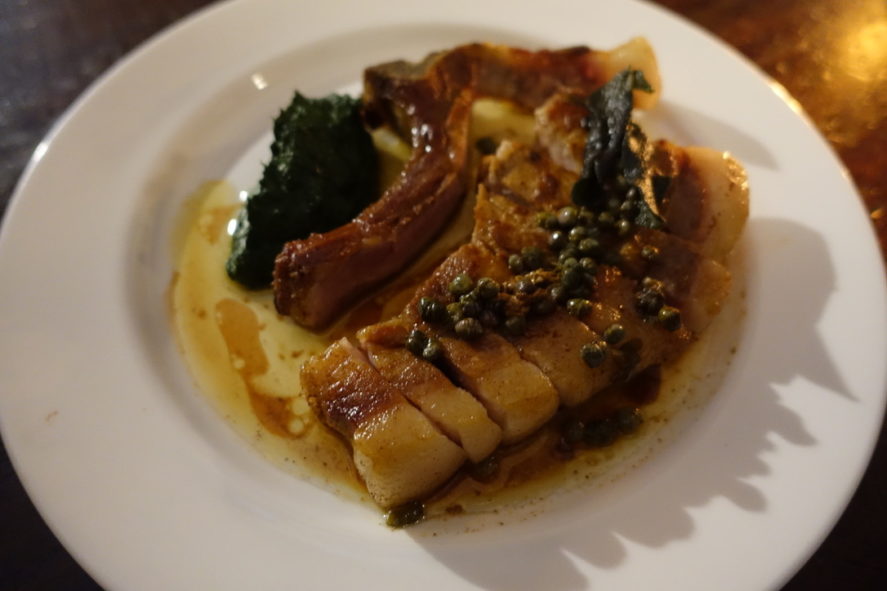 Well what can I tell you about Emile? It’s Chef Damian Clisby and Nick Gibson’s 6 month residency in the place that formerly housed Rok – the Scandinavian accented restaurant that did virtuous things with fire. The restaurant inherits its name from Clisby’s grandfather and comes with Damian donning the chef’s whites, whilst Clisby takes care of the wine. The interior is all about Prussian blue bricked walls, low hanging lamps and candlelight. Its snug and feels welcoming, especially when Chef Damian greets you with a handshake and proper introduction on who he is. His style of cooking is rustic stuff with finesse, but not too much finesse. It taste like it’s all made from scratch. More on that in a bit..

As we’re seated Damian brings out an off menu whopper – I think he said it was a Red Sea bream for £80. We were tempted, but opted for two pork chops.

We kick of with a baglio bianco £6 and a chardonnay from the Winery of Good Hope £25, both dry and minerally – just how I like them.

The sour dough is from the bread obsessives The Dusty Knuckle Bakery in the nearby Dalston. If it’s good, why not ship it in.

First came the fabulous Lincolnshire Poacher croquettes that were crisp shelled and oozing with sweet, yet nutty cheese. More of the same cheese was grated on top for good measure. Each one was nestled on a dark brown pickled walnut purée that was an adhesive for the croquette to the plate, it tasted like the best HP sauce. I mean what I say in the best possible way.

Waxy pink firs £8.50 glistened in the candlelight with expertly chopped chives clinging for dear life. Each spud demanded to be dunked into the creamy mayonnaise the dish came with. With them came slivers of anchovy that gave their salty kick as did the capers.

Pear, pecorino, chicory salad £12 came with the aged funk of speck, the Italian cured pork. The dish was a simply hewn affair that we didn’t hesitate gobbling up.

The butter yellow ribbons of pappardelle £15 were cooked in a way that it was a huge nod to al dente, as it should. From the nice sheen and nutty flavours, I suspect the chanterelles it came with were cooked in butter and lots of it.

The wild duck £23 was the fall of the bone kind and I couldn’t help dredging the soft fibrous flesh into the sauce that had a sheen that I could see my face in. When you keep digging there are stewed prunes, crisp cabbage and sliced duck breast made for the sauce, the sauce I find myself running each morsel into to see how much I can gather into my fat mouth.

We were glad that we doubled up on the Paddock Farm pork chop £23 with puréed cavolo nero, sage and capers. It was the type of pork that tasted intensely of itself, helped by its butter laden pan juices. The type of pork we can be best friends with.

Damian must have clocked me running my fingers along the edge of the plate to gather the sauce into my gob, so he brought over more of that Dusty Knuckle bread for some scarpetta action.

“Orignal bean chocolate” £8 was a lavish mousse of sorts with the crunch of hazelnuts and from what I gather Chantilly cream. The real star of the show as was crunchy shard that tasted of the most intense caramel. I found myself getting a little bit of everything on my spoon for maximum effect.

Warm spiced pear £8 with a home made ginger biscuit and Madagascan vanilla ice cream was an unsuspected delight. Everything tasted like they belonged together It tasted like Christmas in a bowl, the whole business was lick the bowl good.

When did I go? Nov 2017
The damage: £50-£70 per head with wine
The good: If you fancy big-hearted simply hewn food that speaks for itself then come here to get that gap in your belly filled. The menu will be weekly-changing and will carousel with the seasons. But the pork chop and pappardelle are here to stay thank God. I give props to anyone who can cook these things I love so good. We literally sat next to the kitchen too – interacting with Chef Damian who barely broke a sweat. It’s these interactions that can make a night, that’s not to say my mates are boring. Ok sometimes they are.
The bad: If I was in an argumentative mood, I’d say the pork chop is generously priced. The nearby Smoking Goat for example does marvellous things to their Tamworth chop with endeavours of Thailand, and it’s half the price. Oh and it’s a 6 month residency that’s been around since October, so get down there before they disappear!
Rating: 4/5
Would I go again? They given me many reasons to!
Address: 26 Curtain Rd, Hackney, London EC2A 3JX
Web: https://www.emilerestaurant.co.uk