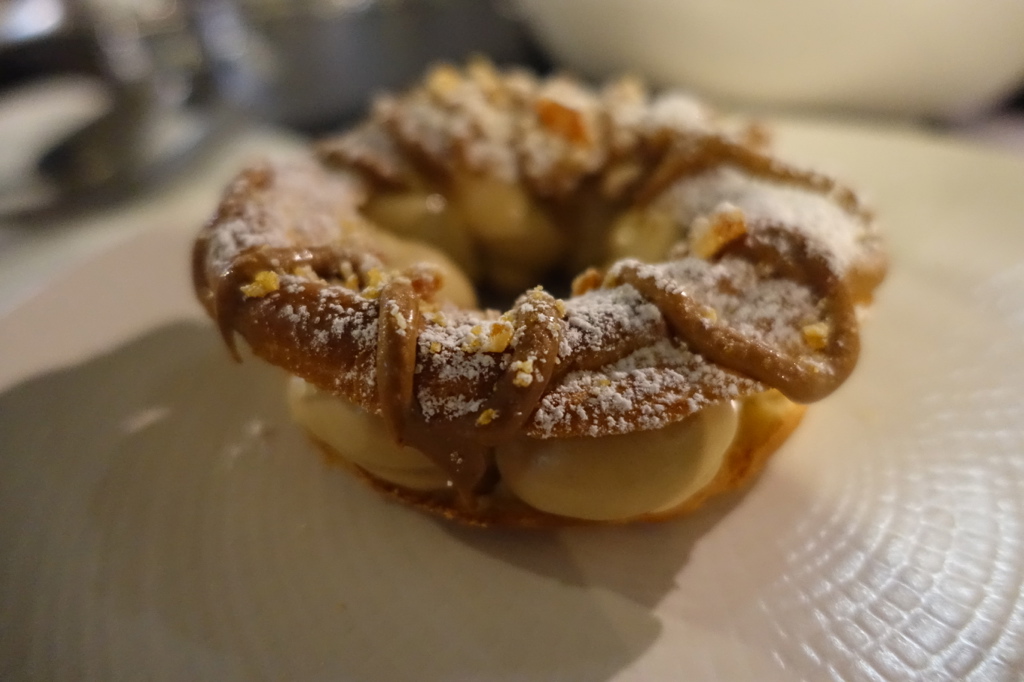 If you have read my previous ramblings then you’d know that I’m a huge endorser of Portland Restaurant, so when I found out that owners Will Lander and Daniel Morgenthau opened new sister restaurant Clipstone, a 52 seater on the neighbouring Clipstone Street, I had to visit. They opened in July 2016 and the menu is created by Merlin Labron-Johnson, who won acclaim at Portland and is now the Executive Chef of both restaurants.

Our booking started off inside with 5 burly chaps on a table of 4 – this was not conducive of a comfortable meal so our lovely waitress moved us outside – I don’t mind dining alfresco at all, especially on a warm August night. The menu is designed for sharing and bottles of decent plonk comes in as cheap as £21 which is a welcoming thing. Lardo Di Colonnata, caramelised walnuts £6. Cured fat with spices and herbs was a decadent start – stuff like this generally tips me over the edge but this was a welcome start. Homemade sour dough bread, ‘North & South’ olive oil infused with lemon £3. First impression always count with bread and sadly this didn’t create a good one. Somehow, it tasted like it was made days ago so it was a stale-dough vs a sour dough. Ventricina £6 – a salami from the Abruzzo region of Italy. It was good stuff. Snails £9 from the specials came with charred leeks, garlic, ham & almond sauce along with sour dough crumb. They were earthy little things that could have passed a woodsy little mushrooms. Crudo of yellow fin tuna, preserved chanterelles and samphire £10. The tuna was wonderfully dressed and the shrooms adding acidity from the liquid it was pickled in. This dish I could have eaten over and over. From pizza oven – clam, parsley, crème fraîche & garlic pizza £10. The oven was a relic from the old Italian restaurant which pre-dated Clipstone, it’s clever move as the pizza is delicious. Ravioli of hay-baked carrot and ricotta, brown butter & hazelnuts £12. The whole dish exuded sweet, nutty earthiness – I just wish they weren’t so stingy with it! Tomatoes, rasberries, basil & fermented tomato juice £6. This is technically a fruit salad and the freshness and combined with the inherent sweetness of the all the elements it was a very refreshing dish. Grilled ox tongue, heritage radishes & crème fraîche £8. This really reminded my of a New York deli sandwich, probably due to the smoky protein akin to salt beef and dill pickles. It can only be a good thing and it was. Cod ‘en papilotte’, rainbow shard, miso and dulse butter £17. Cod cooked in parchment paper is what it is in case you’re wondering, having miso and dulse there too means the deepest of umami. It was wonderful cooking but where is the rest of it as it disappeared in 3 bites! Chop of Saddleback pig, (for 2) summer beans, peach and almonds £32. Cooked to a prefect pink in the middle this pork was really succulent. 86-day aged Longhorn beef (400g), onions and pickled walnut salsa verde £45. The beef came with that dark roasted nutty meat flavour and was really rather delicious. The big ‘however’ is that I’d say it was that our 400g was 80% fat and bone which is great if you’re a canine. English strawberries, hay and white chocolate cremeaux £6. Those gorgeous succulent strawberries and velvety smooth whipped cremeaux along with that nutty crumb it was a winning formula. Everything sang in this bowl.

Paris-brest £7. Our waitress so aptly named this the Kinder Bueno on steroids and she wasn’t far wrong. That hazelnut whipped cremeaux encased in that salted caramel piped pastry was a brittle as glass – the whole thing was sinful and delicious. I salut you chef. When did I go? Aug 2016
The damage: Expect to pay £65-£80 per head with drinks.
The good: There was some wonderful cooking here, I knew there would be and I’d have a good meal.
The bad: There were some glimpses of magic here but also some casualties, the bread for example was a makeshift door stop and the beef, well I could have fried my chips with it. I reckon they’ll be delicious chips too. The portion sizes meant that the value for money here isn’t as good as it’s older sibling called Portland.
Rating: 3/5
Would I go again? Yes
Address: 5 Clipstone Street, London, W1W 6BB
Closest tube: Oxford Circus
Phone: 020 7 637 0871
http://www.clipstonerestaurant.co.uk