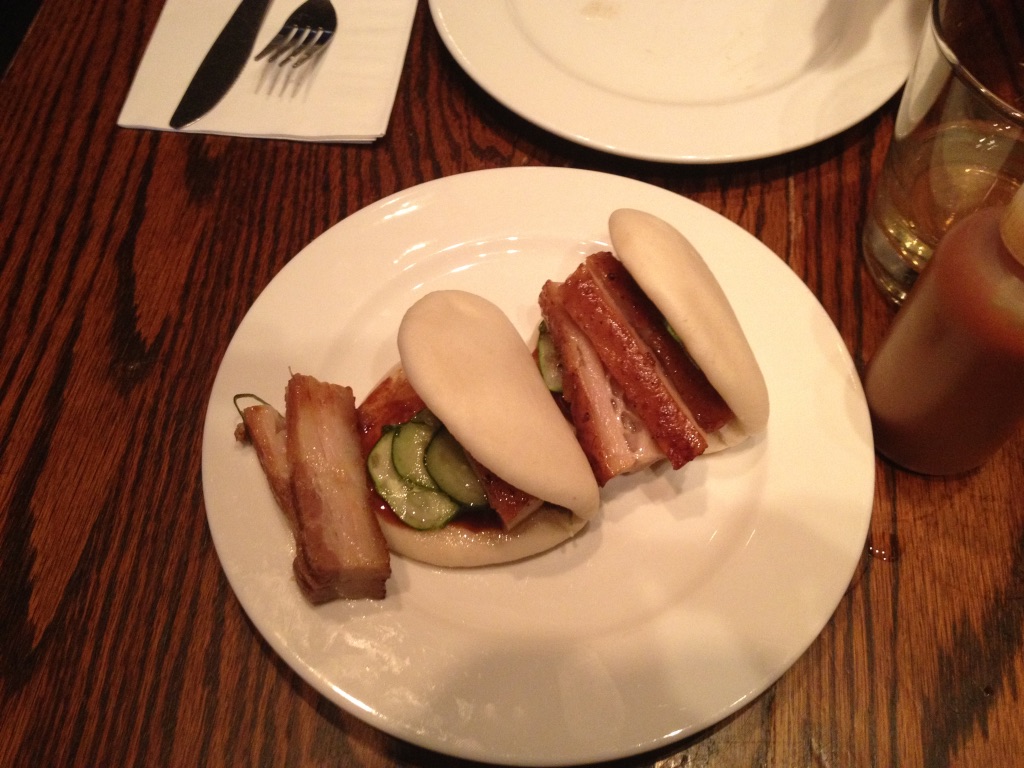 Restauranteur, TV personality, French culinary school graduate David Chang opened his second restaurant Momofuku Ssäm Bar in August 2006 within Manhattan and it aims to create globally influenced, seasonally-led dishes. Chang is of Korean descent, raised in Vienna of Virginia but the cuisine here is cross-cultural, a few random country cured hams, Japanese, Korean and Chinese ingredients are all showcased. All the dishes are bespoke, creative and packs plenty of flavour. Sidecar – cognac, cointreau, lemon $13 and to to right a Penicillin – scotch, lemon, honey, ginger $16, both are crafted brilliantly and packed a punch. Naked cow girl oysters, ham powder, lime, satsuma – 3 for $16. They were tiny little things but combined with the various condiments there were bags of flavour. It was a good start. Steamed buns, pork belly, hoisin, cucumbers, scallions $10 for 2. It was my first time eating a hirata buns and the melt in the mouth butteriness was like your first kiss, you never forget it and want to do it all over again. The pork is from the belly, not the leaner side which means more fat and more flavour. The jammy-umami sweetness of the hoi-sin and pickled cucumbers cuts through some of the richness. Chilli soft shell crab, avocado, tomatillo, mole $18. I could easily imagine the contents on this plate with a fresh squeeze of lime sandwiches in between a taco, perhaps that what the dish needed to make it complete. Somehow though, the batter hid all of the inherent sweet of the crab. I really wanted to enjoy it but I didn’t. Charred Spanish octopus, pine nuts, celery, ham chips $19. It’s exactly what it says on the tin and the octopus was as tender as can be. The ham chips were an interesting addition, kinda prawn cracker like and perhaps the method in the madness is the same process? At $19 though we expected there to be 3 times as much! Spicy pork sausage & rice cakes, Chinese broccoli, Sichuan peppercorns $19. The pork sausage is ground and blends into a ragu type sauce with enough heat to put your mouth on fire. It came with fudgey rice cakes, akin to the texture of wine gums, some sliced broccoli, crispy shallots and scallions. There is a lot going on in this bowl in a good way. The flavour is abundant and the pleasure-pain addiction hits you like a steam train. When did I go? June 2012
The damage: Expect to pay $60-$70+ per head with drinks
The good: All in all it was a good dining experience here and the most interesting dishes were those rich steamed pork buns, set-your-mouth on fire spicy sausage rice cakes and expect to be surrounded by a lively atmosphere when wolfing them down. Be sure to wash it all down with artisanal cocktails on offer too.
The bad: Some plates were hit and miss such as the weeny-teeny octopus and insipid soft shell crab.
Rating: 3.5/5
Would I go again? Yes
Address: 207 2nd Avenue, New York, NY 10003 USA
212 254 3500
http://www.ssambar.momfuku.com/