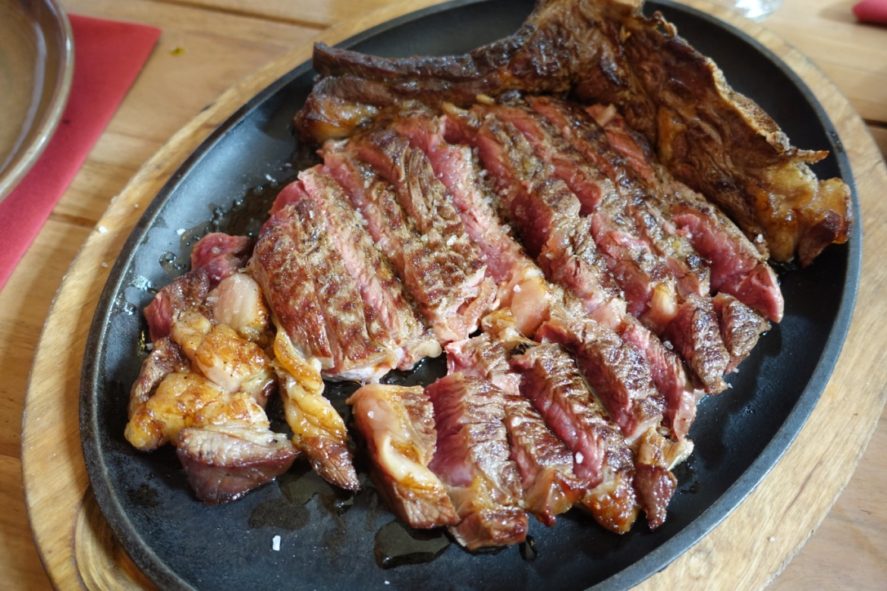 Macellaio RC Italian for “butcher”, is founded by Roberto Costa; he first opened in South Kensington in October 2012, before launching in Exmouth Market in August 2015 and Union Street in October 2016, now in Clapham since the summer of 2017. Matteo Riganelli runs the kitchen in Exmouth Market which is where we’re dining. What they all have in common is butchery of Fassona beef, dry aged for up to 50 days onsite and is sourced from the region of Piedmont in Italy. After some digging, I found out that this special breed of cow has a mutant gene that gives its flesh a “double-muscling”. This means that not only is it low in fat, but it’s lower in cholesterol and higher in healthy acids. Beef this interesting deserves to be shown off, which they do in the windows hanging up to lure you in. They’re in cooling cabinets too, ironically fat laced and looking ruddy high in cholesterol! It’s crossed sectioned in wedges for all to see, so the dark bark ageing contrasts against the deepest ruby centres. It looks like bloody lovely animal, and it is.

The is juice all sourced in Italy – yes it was bloody sumptuous.

There’s eight of us, so a fixed priced lunch was available only at £35. First up there was the Fessona salame, the colour of crimson red, with flecks of white fat running throughout the thin slices. It had the right amount of cure and salinity for it to melt in the palate. We demolished the lot.

After this was the Fessona Bresaola, a more thinly sliced cure in a lighter shade of red, but with equal amounts of tongue melting qualities.

Silky sheets of beef carpaccio with Tuscan olive oil were almost paper thin, its strands barely holding when lifted from the charcoal coloured slab it was served on. And we weren’t even on the main event!

Milky burrata was served with token strands of rocket and quartered cherry tomatoes. Not only is the moo good here, but also its by products.

The restaurant’s other headline, they call it “steak from the sea”, is aged tuna. Just like the beef charcuterie the flavours are clean and minerally and slips away nicely.

Last but never the least from the charcuterie came the silky folds of prosciutto with rustic hunks of salty-sweet crunchy parmigiano reggiano.

When the starters are done, at this point I’m already deeply satisfied, but the meal hasn’t even reached climax point, they bring a tray of ruby red steaks for us goggle over before it hits the grill. With the meal, we get the 30-day-aged ribeye and it looks like a very tidy example of the breed.

But first, we get our carb hit in the form of thin trenette noodles lovingly coated in homemade Ligurian pesto. Hunks of soft boiled potatoes and tender green beans also feature.

The prized animal finally arrives, and although we were fed so well already, we found room to fit the blistering good beef into our greedy bellies, all you need to know is that it has depths of flavour, full of sweet beefy notes and minerality. All the sugars in the protein were caramelised from the heat of the pan, the fat was also crisp on the edges, some of the lads headed for these prized bits first.

But it didn’t stop there, as along came the tuna steak cut from tender upper mid back from the finned animal. It’s grilled in a greaseless overcoat of breadcrumbs and garlic with sweet cherry tomatoes neatly placed on the top. Yes it could have done with a pinch more seasoning, but it really didn’t matter as you could get the taste the unmistakable meatiness of the fish.

Chips skin on were done well too.

As was the wilted spinach and young stem broccoli. It seems that if vegetables were their brief, they’ve hot that one too.

I surrendered a while back until the brought this platter of fresh pineapple, chocolate cake, tiramisu, cheesecake and the glorious dolce fritto which are crisply crumbed fingers of set custard.

Our shot of adrenaline came the the form of limoncello, a drink that can make grown men lose themselves.

When did I go? June 2017
The damage: Expect to pay £40/60 per head with wine
The good: What can I say, we got charcuterie made from the magical beef, soft folds of swine, steak from the land and steak from the sea of similar magical qualities. It all came with exceptionally good sides and an irresistible desert platter that put us all in a deep sugar coma.
The bad: Not a lot, although my slight whine was that the cut of steak I had wasn’t the most tender as it was cut with the grain. Pah. First world problems. The likes Goodmans, Hawksmoor and Gaucho should definitely watch their backs with Macellaio firmly on the prowl.
Rating: 4/5
Would I go again? Yes
Address: 38-40 Exmouth Market, Farringdon, London EC1R 4QE
Web: https://www.macellaiorc.com