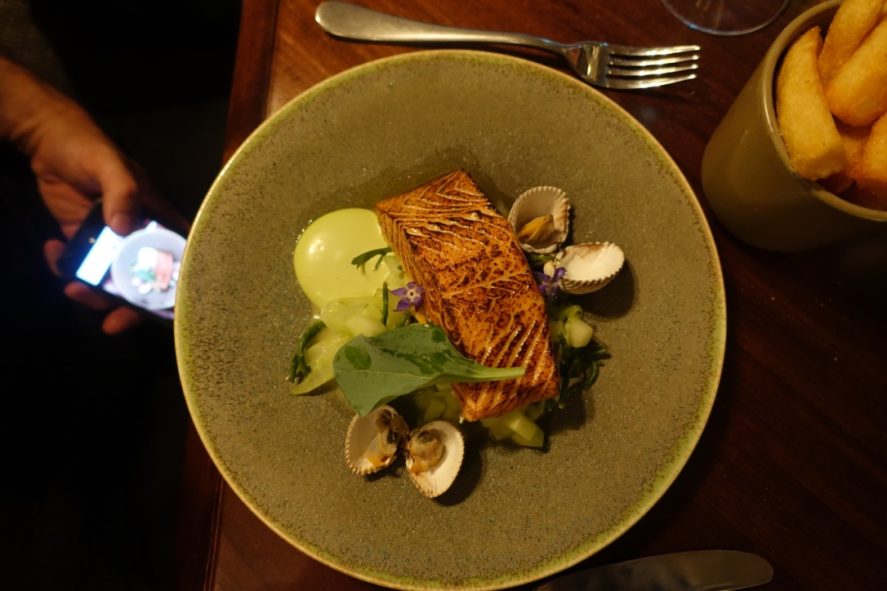 I first dined Ollie Dabbous’s self named Dabbous back in October 2013 and was easily blown away by the goodness. The food produced had no qualms about forcing boundaries – I vividly remember the coddled egg with mushrooms and smoked butter. It was presented in a hollowed out egg shell, the contents was the most decadently satisfying thing I had eaten back then. Complimentary oven warmed crusty edged sour dough was also brought to the table with room temperature butter. It was the sort of bread that gets into your soul and rubs your belly – it’s was the stuff that paved a way for my love for the carb and I can’t endorse it enough. He’s since closed Dabbous after 5 years – the place where he won a Michelin star within eight months of trading. The guy’s got culinary horsepower in abundance that’s for sure. In the summer of 2017 he partnered with the Experimental Group and take over at the boutique Henrietta in Covent Garden. So full disclosure, his stint at Henrietta was a short lived affair, as after a year or so he opened Hide in conjunction with Hedonism Wines, that’s where you can find him now.

The drinks, be it wine or cocktails where on point.

First up from the grazing section menu we had the Ibaiona saucisson sec £4.50 which had a pleasing aromatic cure. The protein to fat ratio was perfect for me.

I had high expectations for the bake here from my visits to Dabbous, but by comparison, this granary sour dough £3.50 couldn’t hold a candle to the stuff I inhaled previously.

The flatbread of freshly picked crab came with the sheen of garlic butter and coastal herbs £11, it was a pleasant thing but didn’t seem eager to please – it felt like a Jane, not the plainest of Jane’s but plain regardless. I’ve had better crab sandwiches elsewhere.

The labne version £9 with pickled vegetables and spring blossoms was better and decided to come to our party.

Radishes £4 with their leafy tops intact, prettily curved around the plate. They came with a dollop of whipped tarama and a good dusting of seaweed powder, it tasted of the coastal shores of Greece.

Slow cooked Saddleback pork had a translucent sheet of lardo specked with garlic scapes was pleasant but punchy at £21.

Impeccably charred salmon £22 came with a pair of briny cockles, small chunks of cucumber and lovage. It was as pretty as a picture but unapologetically small – it seemed that times were tough and the fish had to be rationed.

Barbecued quail came skewed on a foraged stick of sorts, earthy notes of fenugreek featured as did pearls of toasted wheat, almonds and clover £22. It was one of the most expensive kebabs I’ve had.

A side of burrata £9 with wild strawberries and bitter rocket leaves sat in a pool of olive oil. It belonged with us as it tasted of the sexy midst of an Italian summer, an expensive one at that.

“Fried agria potatoes £5” as advertised were just thick cut chips with a nice thick crisped edges and fluffy centres. Why couldn’t they call them chips?

Corn on the cob £5 with melted butter and meadowsweet had a delightful char. I’ve not had “meadowsweet” before, but I can only describe it as floral!

The charred hispi cabbage £5 should take some lessons on how to taste great from the one at Zelman Meats, in other words it was a duff note.

We closed the show with some over fresh madeleines £9 with chattily cream. They were the star of the meal, their caveat of a 15+ minute baking time before we could gorge on them was worth it. But they’re just as good at the Merchants Tavern who give them out for free.

When did I go? June 2017
The damage: Expect to pay £75 per head with drinks
The good: The space we dined it was all about low slung velour sofa’s, ornate cornices and subtle sunlight coming through the conservatory – it was great. But the food didn’t match.
The bad: I don’t mind emptying my wallet when it comes to good food, but there are so many more brilliant opportunities to spend on a good meal elsewhere. Take the Michelin Starred The Ninth for example or the exquisite A.Wong, closer still is the marvellous Frenchie. All of which are cheaper and provide more thrills.
Rating: 2.5/5
Would I go again? Hide I’m coming for you
Address: 14-15 Henrietta St, Covent Garden, London WC2E 8QG
Web: https://www.henriettahotel.com/