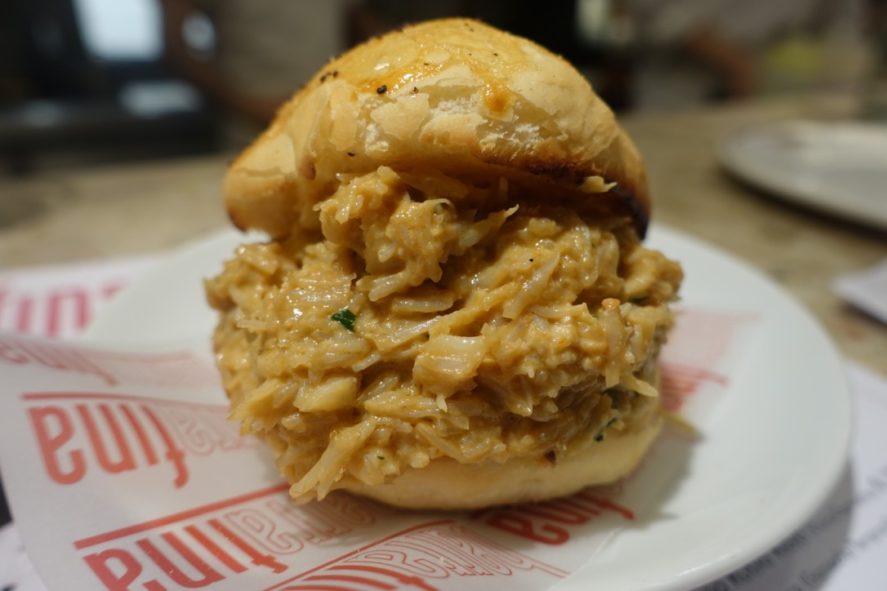 I first came to Barrafina Drury Lane a couple of weeks into their opening in the summer of 2015, then I said it was some of the best tapas London has to offer. Fast forward a couple of years and I still stand by that statement. It’s all about robust flavours with and an ingredient count that rarely goes above three or four, a held back approach, but a hardcore conviction that they know how to get the best out of good produce. Everything is delicious and finish-able. Not because that the portions are teeny, it’s just that it taste so good you don’t want to leave anything and you’ll end up a doe-eyed fan boy like me. My original review can be seen here.

What they do exceedingly well are the croquetas, and this corn-fed chicken version is a fine example of that. Inside the crispy shell you get a thick splattering of dark meat which has been treated to some low and slow love. There is a pot of marmite coloured jus for extra flavour and moisture too.

Langostino frito come in at £4.6 a pop, they’re are headless shell-on prawns, battered with a skewer up its jacksy. They’re served in shot glasses with a glistening honey-chilli dressing, bum up like an angry hornet. Staying dutiful, I ate the shells too, their crispiness demands that you do as does their natural confectionery sweetness.

The specials are always on the mini blackboard.

Here is the plating of the a dish unique to the Drury Lane site, the crab bun £8.80, or the crab bao as I fondly refer to it. What they’re so good at at here is executing seafood to such a high standard, and this crab bao nails it. Crab is one of sea’s tucks-shop treats and this version is so sweet, they also add the fatty head fat too that makes the sauce undeniably delicious.

It’s hard to fault classic tortilla £8. It is an enabler to happiness.

Another must order is the pork belly with mojo verde £12.50. It’s been slow cooked for hours and the skin has that sort of crunch that makes you plot a return. It’s the very best pork crackling, brown blistered with just the right amount of mouth-coating stickiness. It comes with a deeply savoury jus that has depths you don’t want to return from and only the earthy, yet snappy mojo verde brings you back for some balance.

For the final dish we got a duck egg, deep fried until the exterior becomes a golden brown, with crispy lacy brown tangles. With it came lamb kidney’s that aren’t for the faint of heart. They had the strongest punch of ammonia that dominates the palate. Only the most raucous and high spirited competition eater could finish them in my eyes. It was an alarming taste that I used glugs of water to dilute.

When did I go? Oct 2017
The damage: Expect to pay £45/50 per head with glasses of vino
The good: I have measured out my life in landmark places to eat and Barrafina Drury Lane is one of them. There’s so much good stuff, the crab-bao as I affectionately refer to it, is one of it’s kind and only available here. The pork belly and everything else I had is unmissable too. I can’t think of better ways right now to spend calories for my money. Even with Nieves Barragon’s departure, this site is still flourishing.
The bad: Eating the lamb kidneys is like a smack in the palate with unwashed football boots from 1991. I’d avoid.
Rating: 5/5
Would I go again? I bloody need to!
Address: 43 Drury Ln, Covent Garden, London WC2B 5AJ
Web: https://www.barrafina.co.uk