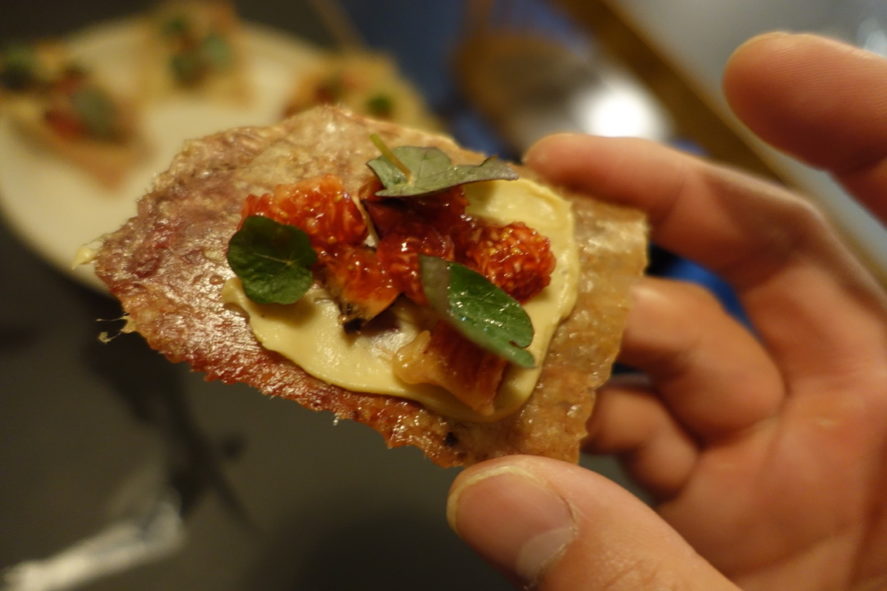 The Laughing Heart – a neighbourhood gem based along the bustling Hackney Road, is owned by Charlie Mellor, a burly-bearded, stark-styled Australian with opera singing credentials. He set about his career at the tender age of eighteen as a sommelier; his enviable resume includes stints at Elliot’s, P Franco, Brawn and Primeur. He opened this heartstoppingly good wine-bar-restaurant in 2016, with plonk sourced from micro production growers, sometimes organic and biodynamic producers – they have a serious glass panelled cellar showcasing the stuff. Inside the the bare brick, dark wood floored space, there is an open kitchen where all the magic happens. This is where Tom Anglesea, the Durham lad who jacked in his A-levels to become a chef, worked at the much lauded Per Se at 21, then worked in Sydney’s Rockpool where, I assume his deft use of Asian ingredients was born. Following from that there was a stint as sous chef at the Spice Temple cooking Cantonese fare; fast forward a year and a half, he was part of the kitchen of The Red Lion when they won a Michelin Star. He finally came to London, cooking at the Chiltern Fire House before he became the Head Chef at The Laughing Heart. We are the beneficiaries of his wondering.

First up came the dungarvan oysters £3 on a bed of river stones. They were hidden away by a snappy granita infused with shiso and apple. It managed to have the character of the sea and the chime of lip crinkling acidity.

They’ve got the sweet science of bread making licked too as this version, a multi-seeded sour dough had a extraordinary chewy texture and crisp crust. We kept asking for it to clean every plate we had so they went back to the kitchen gleaming.

Another stand out snack were the translucent and paper thin chicken skins; they provided a crispy platform for the black mission figs and yeast slathered on top. You can’t ask for more when it comes to finger food. Trust me.

We ticked the vegetable box with leeks £10 that were stewed down and laced with the ripe kick of tellagio, texture came in the form of crushed hazelnuts. They were inoffensive, but for something in the double digits, you’d expect a bit more impact.

Earthy Tokyo turnips £9 were the colour of ivory white, blackened on one side and got some spicy walnut mole for good measure and crispened kale that would make any dish better.

Then came lightly charred hispi cabbage with chunks of soft cuttle fish with a sauce of its own ink and black pudding, this was a celebration of sweet-earthy flavours.

Heirloom pumpkin £11 was combined with whey, the creamy by-product of strained milk and ricotta then it’s piped into agnolotti. They were obviously made from scratch and were all the more alluring for it. We agreed that it was one of the best dishes of the night.

Peking mallard £12 came with beautifully rendered and crispy paper-thin rust coloured skin. We got a portion of the pink-centred breast, expertly sliced, made for wrapping into the buckwheat pancakes, throw in some of the toffee coloured plum sauce, matchsticks of crimson pink plum and Asian pear for a bite that will blow away your local takeaway. On the side you’ll get the leg, again with crispy skin and muscular flesh that does require some jaw strength, but you’ll be rewarded with depth of flavour.

We were on a roll with game theme as the sweet yet minerally Yorkshire partridge £14 with chanterelles and Williams pear was a winner too. We used more of that bread to scarpetta the heck out of the sticky jus’d plate.

Desserts seem to be on high notes too as the decadent russet apple tart tatin £8 and brown butter had really satisfying sticky toffee notes to it. With it came soothing ice cream, melting and deeply flavoured. It was demolished in 30 seconds flat.

When did I go? Oct 2017
The damage: Expect to pay £75/85 per head with glasses of vino
The good: There’s so much quality ingredients here that are fussed over in the kitchen, giving food that sparkles and taste so good. The dishes that I can’t quite forget is the Peking mallard, agnolotti, chicken skins and THAT bread! Let’s not forget the delicious plonk either.
The bad: It’s a bit of a schlep to get there if you’re not from the area, but it’s worth the schlep.
Rating: 4.5/5
Would I go again? I bloody need to!
Address: 277 Hackney Rd, Bethnal Green, London E2 8NA
Web: http://thelaughingheartlondon.com