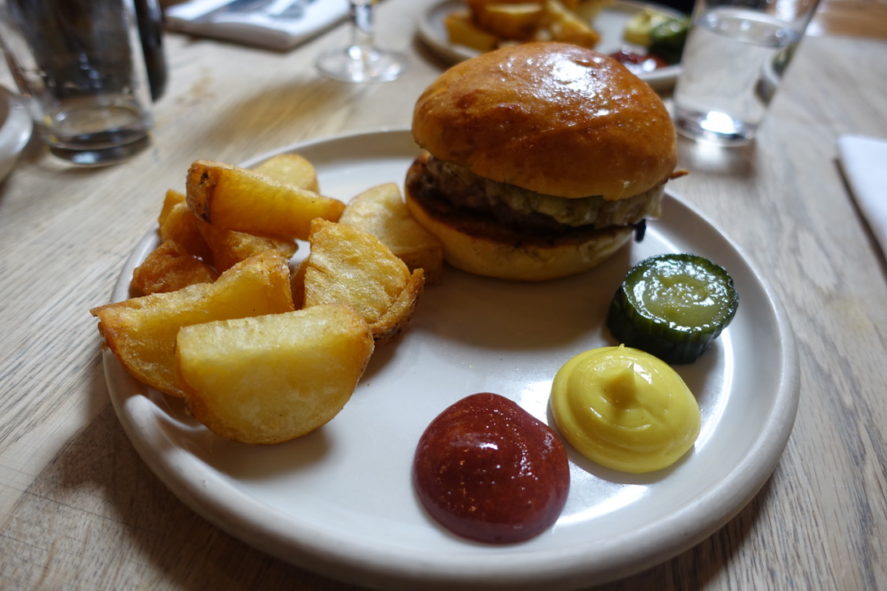 Elliot’s was founded in 2011 by Australian Brett Redman and being on the edge of Borough Market, I’m pretty certain they get plenty of footfall from the fanfare of the market. We are those guys. We get to enjoy the pleasures of their virtuous use of small time growers and they shout about their usage of the whole animal and the lesser cuts. The daily menu is advertised on a blackboard with a big, airy glass panelled roof lending the extra light. Catch of the day is bought directly from the shore for extra freshness. They were probably one of the pioneers of distressed brickwork walls in Borough, as there is so much of it on the peripheral eye as you gaze out of the glass front into the market, which brims with the patter of hungry patrons. Chipper staff greet you at the door and at the L-shaped bar as you walk in. We came just before The Whisky Show 2017 for a good feed.

Their all about natural wine here, but we opt for the bunny hop ale £5.

What you looking at?

The bread, an assortment of sour dough £2 is decent.

Oysters £3.50 were grilled just enough so that they stiffen and take on a different texture to the slippery raw versions. They get a dollop of rust coloured Nduja XO, a genius umami on umami condiment that should be on all seafood.

Elliot’s cheeseburger £15 was a medium cooked 50 day aged beef patty with compte cheese and a slathering caramelised onion. The bun itself I found a bit parched, perhaps the misjudged dough was over worked slightly and it spent too much time the oven. The major silver lining was that everything else was on point.

It also came with rustically cut crispy maris pipers, slices of dill pickles, a dollop of house made ketchup and aioli.

When did I go? September 2017
The damage: Expect to pay £30/35 per head with beer
The good: There’s lots of appealing things to eat here in a bustling part of town they call Borough Market, take those chicken hearts for example, I also think it’s a solid choice to the sometimes hit-and-miss options in the market. The burger itself has its own personality even if better can be had elsewhere. In restaurant terms too, they’re probably adequately defined as geriatric considering how long they’ve been here, so they must be doing something right!
The bad: In an area dripping with choice, it’s easy to overlook Elliots. And if I was in a whinging mood, I’d say the potatoes were a bit tepid.
Rating: 3/5
Would I go again? When the craving comes
Address: 12 Stoney Street, Borough Market, London, SE1 9AD
Web: https://elliotscafe.com