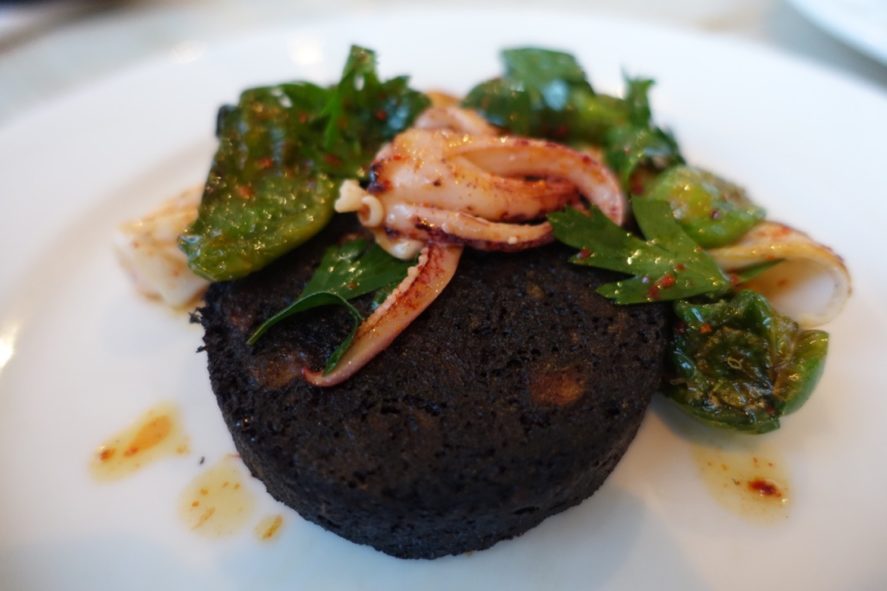 Brawn is ten years young this year and is located on the corner of Columbia Road. On Sunday’s the street is transformed into oasis of foliage and flowers – it’s fat with quint flower shops and Georgian terrace houses. Inside the two roomed restaurant, there’s white-painted brick with neatly positioned art work; the first room has a bar for perching on and the second is where the open kitchen operates. The brightly padded chairs and tables are wooden and of course we get the one that wobbles. They also have a bread table stacked high with cedar coloured crusts that show a colony of lacy irregular sized bubbles when cross-sectioned, it’s the very definition of craft. Apparently they get theirs from the E5 Bakehouse, more on that bread later. And if you ever wondered what an East London restaurant looks like, look no further. The restaurant is owned by Ed Wilson, a former chef from Terroirs.

We go for a chilled bottle of Macon-Chaintre £56, a crisp, refreshing tonsil tickler. Just the way I like it. Easy tigers.

The sigh-inducing sour dough with salted butter. We asked for 3 portions as were a pair of greedy sods.

The burrata £9 was a porcelain coloured creamy shaped joyous thing, on a bed of stewed down runner beans and mint.

Smoked cods roe £9.50 came with picked crab, sorrel and dandelion – it tasted of summer by the sea.

The good work with things from the shore continue with a tail-end fillet of sweet wild seabass £24 with crispened skin. The soothing stew of ratatouille it came with was some of the best I’ve had.

Although the bavette £18 required professional jaw strength to break down, it rewards you with satisfying sweet mineral flavours that seemed to go well with the bitter grilled radicchio and walnuts. I left the gorgonzola as it’s not part of my skill-set eating cheese with shades of funk that could make young children cry.

The star of the show was a boudin noir made from pigs raised in Saint-Jean-Pied-de-Port in the Basque Country. It’s black pudding that’s a model in itself, a celebration of the flesh, fat and innards of swine that is delicately spiced. It truly is one of the wonders of the culinary world. A garnish of soft baby squid legs that have been caramelised lightly with parsley and pardon peppers complete the story.

We skipped desert, there’s always a next time!

When did I go? Aug 2017
The damage: Expect to pay £70/80 per head with booze
The good: What to expect Brawn (est Nov 2010) is French accented utter brilliance, full of broad-shouldered flavours. I’m hardly surprised that it’s been around for so long. There were many standout things to eat such as the wild seabass and bread but what really made the clock stop was the black pudding, I still think about it to this day as the flavours summon you like a mistress in the night. I’ve even called in to see if they’ve had it on the menu prior to re-booking! That being said there’s many wonderful dishes to tuck into here.
The bad: Not a lot to be honest.
Rating: 4.5/5
Would I go again? You can get a resounding yes from me.
Address: 49 Columbia Rd, London E2 7RG
Web: http://www.brawn.co