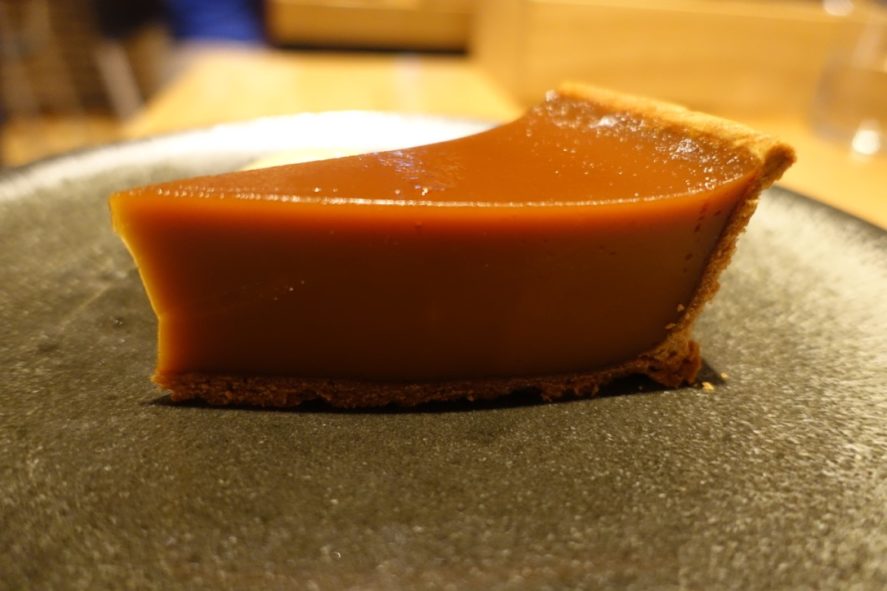 Trinity Upstairs was part of the head to toe revamping of Clapham’s much and deservedly lauded Michelin Starred Trinity. If downstairs prescribes crisp white table clothes, high bourgeois cookery and sommelier’s devoted to their craft, then upstairs is the loose collared brown-brogue’d, denim wearing version having fun on the weekend. Unlike downstairs, it has a fully open kitchen, a wine cellar for all to see and hanging charcuterie. Consumption of the goods is done on high stooled communal tables, with a menu that speaks English with a soft Italian accent. Our host with the most “Matthew” is the same chap that looked after us during my first visit to Trinity all those years ago before they gained a star. What a guy.

The sour dough £2 with it’s chestnut coloured crunchy bark and lacy dough was a decent start. Room temperature butter in the right shade of yellow was great for slathering.

Crab arancini £4 was anchored down by the sweet, sticky livery notes of brown meat and arborio rice with the right level of bite. The green flecks of seaweed were the supporting act of the surf. They were crisp-shelled and flipping moreish. We ordered more when Jeff our dining buddy arrived mid-way through the meal.

Charcuterie croquettes £3 were tablet shaped greaseless crispy snacks, filled more sticky arborio, with the nutty funk lustre from the cured meat mixed in, they were topped with dollop of sweet paprika mayo.

Burrata £9 came with a good drizzle of herb oil, stewed down aubergine with mint and micro coriander. After a couple of mouthfuls of this one, it become tedious and one noted. Don’t look out for it, unless you love burrata.

But this is when the meal lost a wheel during the arrival of the bonito yakitori £15. Aesthetically pleasing skewers of tuna to look at with a nice carbonic sear, caught too much heat which meant they were parched to the core, which meant a wasted bit of fish.

Things got back on track with a crispy skinned gurnard £12 with a table poured deeply favoured emulsion of sorts, unmistakably delicious it was.

Being a swine devotee and seeing this hunk of beautiful middle white pork belly £14 with its puffed up crackling just got the saliva taps going. Alas, what was got a meek-flavoured un-yielding piece of dry protein that had the looks but not the substance. A pity really.

Chocolate cremosa with salt caramel ice cream £6 was just a pleasant chocolaty creamy thing – more of a hole filler than anything with real impact.

But then came the salt caramel custard tart £5 – a thin based thing with toffee coloured set custard with flavour demands your attention and attracts the type of frenzy spooning action that fires crumbs onto the neighbouring tables, and the spoon scraping the plate until only the residue of the ice cream is left.

When did I go? Aug 2017
The damage: Expect to pay £50-60 per head with glugs of wine
The good: There are some indulgent things to eat here – the fried stuff is brilliant, I could have just eaten the croquettes and arancini for a happy night out with a good wedge of caramel custard tart. Watch out for those if/when you come here. Matthew, our host was also one of the best things of the meal, his knowledge and charm was second to none.
The bad: Annoyingly, Trinity Upstairs isn’t a place where you can chase big moments, well not for me anyway for some of the reasons listed above.
Rating: 3/5
Would I go again? Not happened yet, but why not.
Address: 4 The Polygon, Clapham, London SW4 0JG
Web: http://www.trinity-upstairs.co.uk