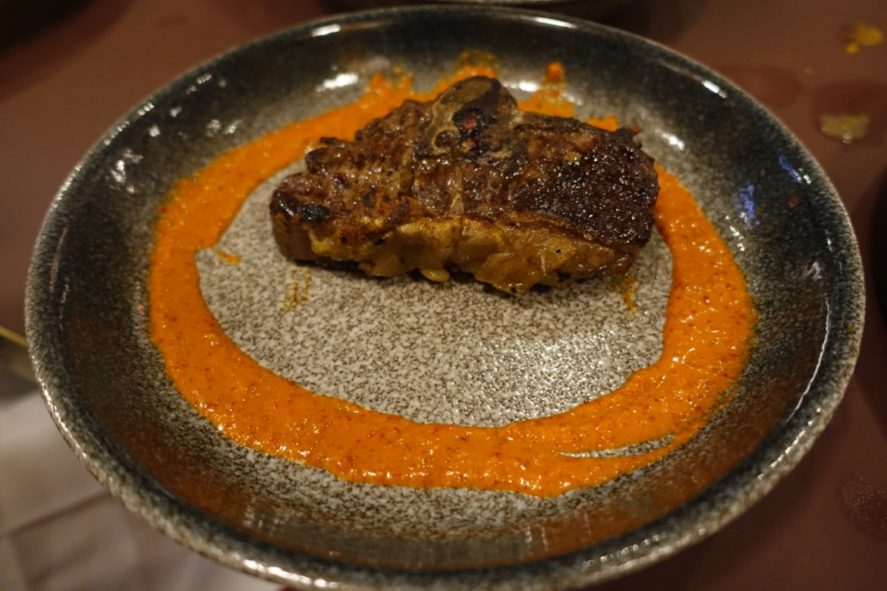 Temper City opens in the summer for 2017 to a bring a curry and gin themed night out to the city dwellers. I heard on the grapevine though that this theme is recently no more – instead meat and taco’s are in just like the original in Soho. It’s Neil Rankin’s second opening in the London, of now he has three. Just like the Soho site, it’s BBQ themed with a huge fire pit taking centre stage in the restaurant; there are dangling lacquered skinned birds smoking above the fire and huge slabs of prime ribs on the griddle. The smell of smoke will permeate your clobber, so be mindful if you’re wearing your glad rags. You can sit around the pit on ox blood leather topped stools, designated tables, or against the wood panelled sides like us with more of that ox blood on banquettes for seating.

We opted for the feasting menu.

First up were the crab beignet – they say beignet, but they were more like pani puri topped with white crab meat, with a good splattering of spiced brown crab meat on the inside – the funk of the stuff hits the palate, yet the cooling yogurt and chilli red spices give balance.

Then comes the mixed pakora that were a manner of all things fried such as samphire and squid. It sounded nice on the menu but what we got was something under seasoned and under spiced. Better could have been had elsewhere such as the ones at Mother India, they were a perfect definition of what a good pakora is. Book your flights to Glasgow now.

Things improved with the mutton rolls – it was a celebration of how soft and tender mutton can be. However, the lack of seasoning and spices made it low-spirited and easily forgettable.

Then came the thali, a parade of spiced fried potatoes, turmeric pickles, yoghurt with a pool of tamarind, peshwari dust and temper’s own Bombay mix, well so it seemed. This was my first time having having a thali, so shoot me, but I wasn’t alone, the seven others in the group didn’t have a clue either. We knew we had to eat it, but our instincts told us that it should be consumed with something else – like something with a sauce, as what we got seemed like a big plate of sprinkles and condiments. We waited and waited, nothing else came. Three-quarters of an hour in, we surrendered and started picking at what tasted only of confusion and profit margin. We left most of it, and staff who collected the semi touched plates didn’t even question it.

Things started to perk-up when the curries arrived. There was lamb scotch bonnet & black pepper stew, North London cheese masala, crispy egg with katsu, and finally dashi chip shop chicken. The colours were tones of mustard, be it dijon or English or Heinz tomato soup, with even the same consistency. They all tasted like chip shop curry sauce but blunt versions. Curry is all about robust flavours, even for babies IMHO. We ordered naan bread to go with them to mop and sob.

Yellow spiced curry chicken fresh from the pit with blackened edges was next. We only got a half bird between the eight of us, it was gone in 30 seconds. But it was more like it as the flavours of heat and spice were all there. It was a shame they were so stingy with it, bear in mind this was ordered from the “feasting menu”. It was hardly a feast.

To compensate we ordered a Barnsley chop £11, a piece of lamb prepared from the saddle and it usually comes with great flavour and tenderness, they nailed that here.

Finally then came the green curry spiced fish, around 30 minutes or so after we demolished everything else. Upon dismantling it, the flesh was stuck to the bone. I’m all for perfectly judged fish, but this needed more time with the cooker. Our waiter advised that this is how its intended from the kitchen. Fair enough, torched sashimi it is then.

The naan breads finally arrived at the end of the meal, around an hourafter we ordered them. We didn’t have anything to mop up, yet we were being British and too polite to complain.

The chocolate and turmeric torte was not only a beautiful thing but the saving grace. What we got was a generous slice of thick butter scotch, sandwiched between a chunky biscuit base and a gloriously evil dark chocolate slab on top dusted with turmeric. It was a fudgey yet sticky love handle enhancing bit of fun.

When did I go? Oct 2017
The damage: Expect to pay £65 per head with soft drinks
The good: The only thing worth mentioning was the Barnsley chop and the chocolate-turmeric torte, I couldn’t really endorse it from the experience we had. I’m sure though with Neil Rankin’s thick boned reputation, they’ll do alight, particularly if they’re going to follow the foot steps of their Soho site which I’ve heard is much better since I visited.
The bad: Temper City tasted of a working progress and just bad manners. The wheels fell off quite soon into the meal and it really didn’t get into gear, nor were there any redemption moments with swoon worthy dishes. In fairness we got apologies at the end, but all we wanted was a good feed.
Rating: 1.5/5
Would I go again? Negative.
Address: 2 Angel Ct, London EC2R 7HJ
Web: https://temperrestaurant.com/temper-city/