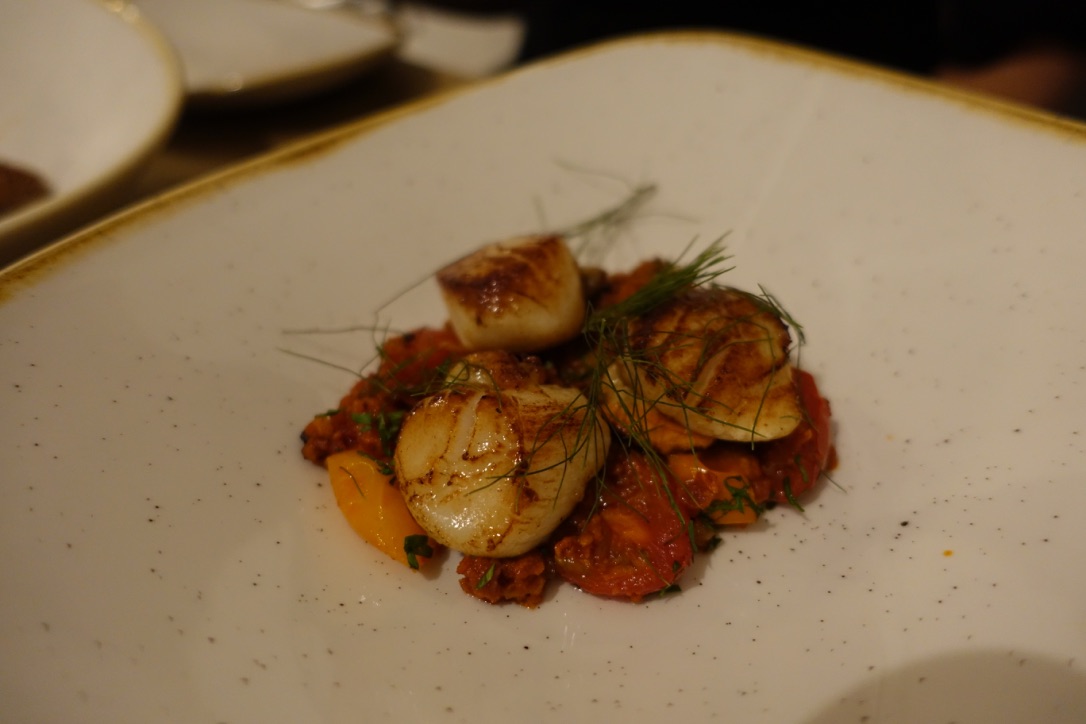 Eat Native’s Head Chef Ivan Tisdall-Downe, a graduate of Hugh Fearnley Wittingstall’s River Cottage Chef School and student of New York restaurant Blue Hill Farm. The aforementioned are famed for their use of foraged edibles. Together Imogen Davis, (who learnt about foraging as a youngster), brings the same notion to our plates in London. Inside, it has a snug, country house feel. What I’m describing is irrelevant now, as the space they once occupied in Neal’s Yard Covent Garden, is no more. They have moved to larger premises in the London Bridge area. Anyhow, I checked out their hunter gatherer gaff before the move.

Native board bread £3 comes with a mixture of sour doughs and pillowy focaccia. Whipped butter and the classic balsamic vinegar/olive oil is there ready for dunking.

Smoked ham hock croquettes are nestled in burnt apple béarnaise and seasoned with lovage salt. The result is mouth-watering, albeit punchy at £8 for 3.

Sweet like candy Lyme Bay scallops (£10) tasted great against the savoury notes of the Treally Farm sobrassada. The acidy of Isle of Wight tomatoes and aromatic wild fennel completes the dish.

Wild mushrooms with Jerusalem artichoke puree, 62 degree egg £9 was a dish that shouted autumnal flavours and was expertly cooked. We loved it.

Wood pigeon kebab, beetroot hummus, pickled cabbage and harissa £8.50. The kebab was hardly the kind you find in your local post pub establishment for the inebriated, it was refined and delectable and came with reminder of how it was taken down.

First of the mains was the Dorset plaice, burnt cucumber, sea beet mayo, tempura radish £15. I was told it went down a treat as Julie scoffed the lot.

South Downs Venison, cooked to a deep ruby red was rubbed in hay ash, came with wild mushrooms, celeriac and bone marrow £17.50. It was a treat to eat, being so tiddly though meant we had to double up our order.

Yorkshire grouse cooked to a lovely pink, seemed to have an odd accompaniment buttermilk, (to me at least), but married well with the sharp berries and heritage beets £12.

Waxy Pink fir potatoes with a mystery green sauce £4 were good too.

The train steams on with a desert of sea buckthorn & cider brandy syllabub, apple sphere’s with ginger snaps £6.50. I’m personally not a fan a whipped cream deserts, but this one was nice to try.

Berkshire raspberries with chocolate beetroot cake and buttermilk ice-cream £6.50, was more up my street and required zero effort to gobble-up. I usually struggle by desert time, but since the portions were teeny it was no hassle.

Toasted hay ice cream affogato £4.50 deserved some dues for their use of hay but we couldn’t get the flavour. It was a nice pudding though.

Caramelised truffles £1 were made extra delicious with their use of honey comb.

When did I go? Nov 2016
The damage: Expect to pay £45/50 per head with drinks
The good: The cooking here is precise, creative and really satisfying. It’s good to see a restaurant’s USP is foraged produce too – how much of it is, were not to know as the menu doesn’t say. Having said it was enjoyable and I’d happily check out their new SE1 site.
The bad: The prices here are keen, which is ok as were in prime real estate but at least give us bigger portions! I’d be keen to see how this reflects at their new London Bridge location.
Rating: 3.5/5
Would I go again? Yeah why not
New Address: 32 Southwark Street, London Bridge SE1 1TU
Web: https://www.eatnative.co.uk