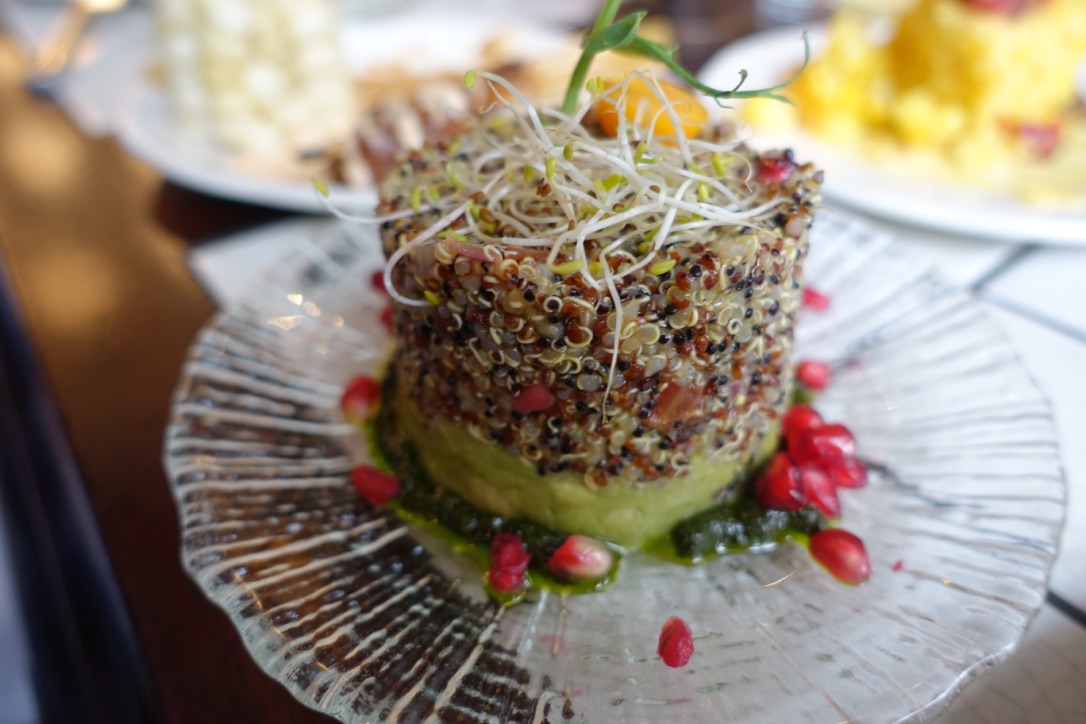 I don’t think anyone can question Martin Morales’s commitment to food after he chucked in his role as Head of Disney Music to pursue a restaurant career. First he opened Ceviche Soho 2010, (read my review here). Half a decade later, there’s a sister restaurant, Andina in Shoreditch, and more recently Ceviche on Old Street (2015), London. The 70-cover restaurant takes over the historic Alexander Trust Dining Rooms, with a ceviche bar, rotisserie and charcoal BBQ grill – all on full display. They’ve for their own craft beer to boot as well. I think they’ve done well to preserve the space as it’s stunning.

The pisco sours are awesome, £8 a pop isn’t pocket change though!

Ají de Gallina Tequeños are crispy wontons filled with chicken, onion, parmesan and Amarillo £4.5. I first had them in their Soho branch and they are a masterstroke. They were eaten so effortlessly and 2 portions were ordered between 3 of us. Even that wasn’t enough!

Don Ceviche £9 was a sea bass, Amarillo chilli tiger’s milk (citrus based marinade, not actually tiger’s milk!), sweet potato, red onion and limo chilli. The the elements are synonymous of clean tasting flavours and this theme continues through the ceviche dishes.

Langostino Amazónico £11.50 were prawns marinated in coconut tigers milk, charapita chilli gel, plantain crisps and red onion. I found this concoction creamy and odd which made the prawn flavour lose its way a bit.

Ceviche clásico £10 was catch of the day – bass is this case with classic tigers milk, red onion limo chilli, sweet potato cream, with plantain chifles. Clean and pleasant, but not conducive of feeling satisfied.

Pastel de Choclo £6.50 was a fluffy, yet delectable cake of sweetcorn, feta, huancaína sauce, which is a creamy cheese sauce with evaporated milk, onions, garlic and Amarillo peppers. Avocado and bojita olives garnished the dish.

Carozón de la Tía £8 is marinated ox hearts, rocoto chilli sauce, Peruvian choclo corn. Is an open minded carnivore’s dream – ok the flesh isn’t as yielding as a piece of fillet steak (I can see why this can be a challenge for some), but instead it rewards you with tonnes of flavour and really muscular jaws at the end of it.

Kung-fu cobia £14 (sustainably caught according to the menu), oozed freshness, spiced with rocoto chilli, chancaca honey, baby bak chow and garlic crisps. The dish seem to make one of us patrons happy as he didn’t leave morsel – I found it underwhelming. The bak choy was definitely not the baby variety though and just bland to eat.

When did I go? Oct 2016
The damage: Expect to pay £50 per head with drinks
The good: I can hands down say that this is probably the healthiest meal I’ve dined out on, not necessary a bad thing as the body needs it sometimes. The only stand-out thing to eat though was the crispy chicken wontons (Ají de Gallina Tequeños), but why make the effort all the way up to Old St when you can have them in Soho with better dishes too?
The bad: It wasn’t a bad meal by any stretch, but there’s little to come back here for, so sadly, it’s easily forgotten about.
Rating: 2.5/5
Would I go again? Maybe, still haven’t decided yet.
Address:  2 Baldwin St, London EC1V 9NU
Phone: https://www.cevichefamily.com/ceviche/ceviche-old-st