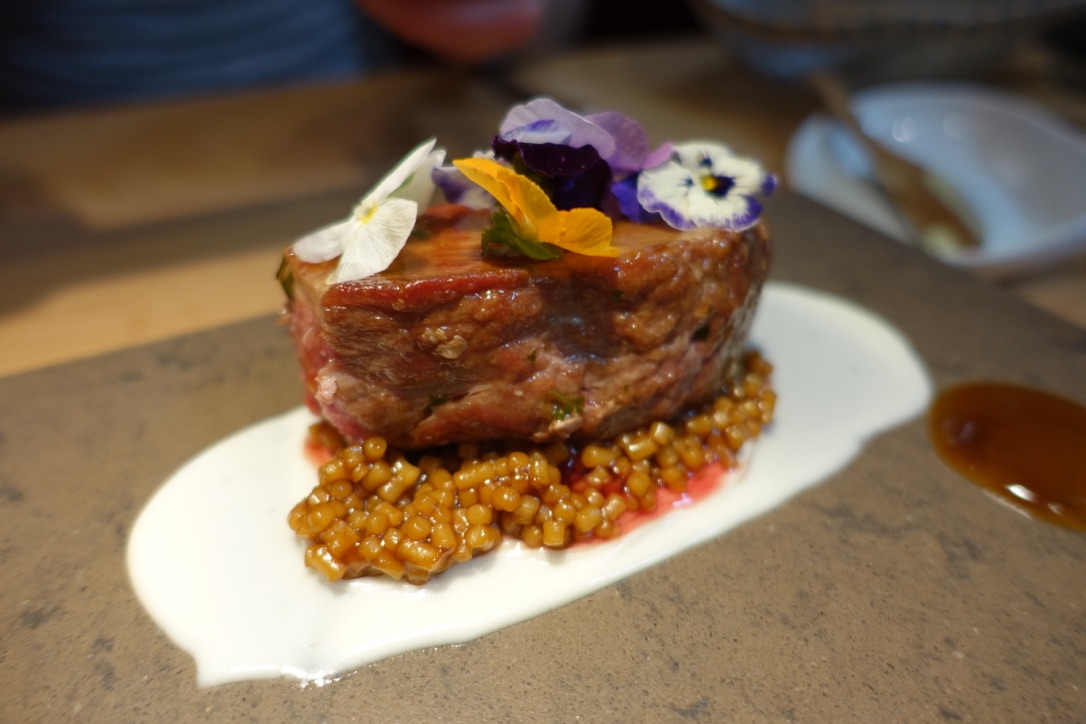 When I heard the 5 Star One Aldwych hotel were collaborating with the hugely talented Eneko Atxa, I had to go. I was smitten with the experience I had at his 3 Michelin starred Azurmendi in Bilbao a while back and couldn’t wait to dine here. His London venture is billed as a more relaxed affair with less keen pricing, with a modicum of that magical Basque cooking brought to your London doorstep. It’s really plush in here as expected.

The Gorka £35, I have no issues endorsing as it was dry, fruity and minerally. Just the way I like my white wine.

Starters are split across the sea, the land and the garden. I went for the Txerri Boda Pork Festival (saucy comments are welcome), which is chorizo on milk bread, glazed sweetbread and suckling pig tempura.

Being brutally honest, the starters we’re an anti-climax. The bread was stale, and everything else seemed to stutter along with minimal impact. The sweetbread was over cooked and was rubbery, the suckling pig tempura was weak in flavour. I hoped the saving grace would be the milk bun (ordered them until we couldn’t eat anymore in Azurmendi), but the coldness of them meant they were duds too.

Among the other starters ordered, was the “Memories of the Bay of Biscay”. It’s a visual masterpiece of a marinated oyster, crab and prawn tartare, but somehow reeked of strong smelling fish. Ok granted, it is shellfish after all, but the point I’m trying to make is that fresh fish should smell faintly of the sea and not something that cat regurgitated and wallops you in the face, aggressively. I ate some and survived though, so did Jeff who ordered it. (Thankfully).

Onto the mains, we had the glazed ox cheeks with ham duxelle and cauliflower, we lifted this dish from the fixed lunch menu. It looked irressitable on paper, but on the palate it was a different story. The sauce lacked depth in flavour as did the other elements of the dish, which were shamefully tepid.

The slow cooked oxtail with mushroom emulsion £14 topped with edible flowers and crostini was a glorious thing to look at, but in the same vain as the ox cheeks, the dish lacked heat and seasoning. It was only marginally better.

The redeeming dish, and deservedly so was the roasted Iberico presa, which came with a “wheat in chickpea sauce and garlic cream” £17. If you love the acorn fed swine, then this is where you should play as it’s got everything you could want; succulence, a pink centre and a deeply umami sauce.

Onto desserts and this is where the restaurant really shines and redeems itself as this cappuccino cheesecake £7 was a hip sticking piece of deliciousness. Made to look like a cup of coffee, but dig into the fluffy meringue to be rewarded with a luxurious cheese cake.

The Basque vanilla sponge £7 was my least favourite as it was a bit one noted and didn’t hold a candle to the other desserts.

The chocolate pear cake with hazelnut praline £7 was so good it simply vanished into our stomachs. It was another feather in the chef’s hat.

It wasn’t anyone’s birthday, but we were treated to the dark chocolate dessert. The glossy brown mound that held the silkiest chocolate mousse within, was expertly garnished with ribbons of white chocolate and a plank milk chocolate. The chocolate biscuit base which was a delight in itself, was studded with texture giving cacao nibs. We ended the meal on a high.

When did I go? Nov 2016
The damage: Expect to pay £65 per head with wine
The good: Casual Basque dining in a formal hotel dining setting, with food that only shines during the desserts, I found Eneko a game of two halves. Having said that the service here was radiant and delightful.
The bad: Aside from the Iberico presa, the mains lacked magic that is associated with Eneko’s boundary pushing pedigree.
Rating: 3/5
Would I go again? I’m on the fence
Address: One Aldwych, London WC2B 4BZ
Web: https://www.eneko.london