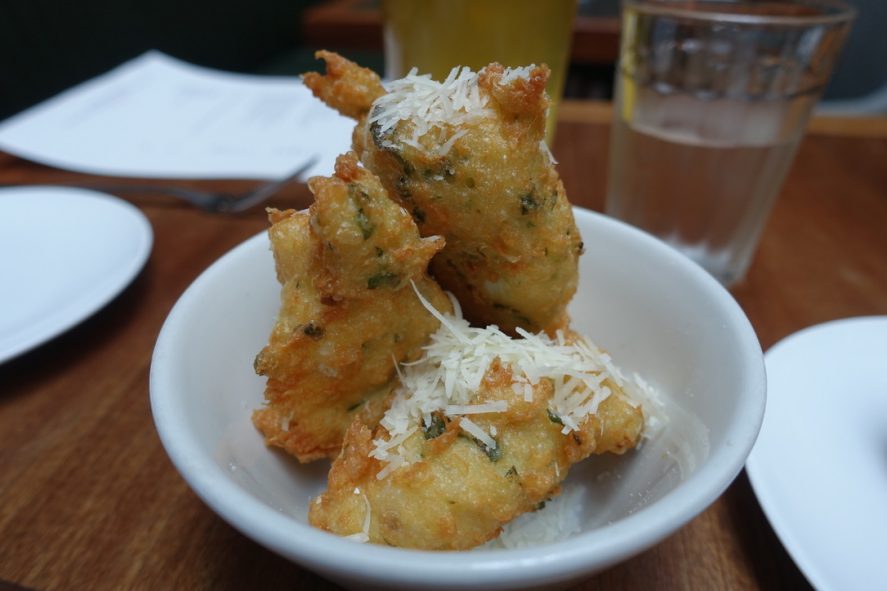 Merchants Tavern one of those stalwart venues in Shoreditch where you can come for everything, a pint, ample plonk and a platform for expertly cooked food that carousels with the seasons. The 130-cover restaurant, a former Victorian warehouse, has been around since September 2013 and is the lovechild of Angela Hartnett, Chef Neil Borthwick and Canteen founders, Dominic Lake and Patrick Clayton-Malone, what a squad. It’s so called as they believe chefs are modern day ‘merchants of good fortune’. A term which emanated with the crew and was coined by French chef Michal Bras. As you walk in the bar area is very pub-like, but then you see charcuterie slicers by the beer taps and pots of homemade condiments for sale which makes you feel like some serious food action is just about to happen. You’re in Shoreditch so there’s bound to be exposed brick inside, it’s a beloved celebration of the former old architecture of how things were. There are ample half moon green banquets that look and feel great for lazing on too with a beverage in hand.

We started with deep fried oysters at £3 a pop which were decent little appetisers.

I had the bavette £9.50 with chargrilled potato and leek for starters. The beef was handled by a chef who understands how to cook this cut, the right side of mid-rare. A sharp cheese shaped into florets featured too with green foliage dressed with a vinegar shallot dressing – it’s a salad for grown ups, what was going through my mind at the time was if this is the beginning then I couldn’t wait for the main story.

Roasted quail with hazelnut pesto, remoulade and foie gras £9.50 was an absolute gem too.

The main story for me was the roasted pork belly with an tunnel ricocheting crunch and melting flesh. With that I got January king cabbage and ironbark pumpkin topped with pumpkin seed and sage pesto. Lubrication came in a sticky jus with the depth it deserved and a puréed smear of pumpkin. I’d only give props to a dish if they’re good and this is.

Lamb neck £19.50 was slow cooked until unctuous also featured with creamed polenta, pickled chanterelles and grated pecorino gave a tangy bite. The whole plate was a thrill to eat. It’s what cold winters are made for.

Quince trifle and custard £8 was a refined version of a classic with a homemade cookie that tasted homemade.

Sticky warm ginger loaf £7.50 was topped with a quenelle of good quality vanilla ice cream that was just beginning to melt from the heat came with butterscotch sauce. I live for puddings like this.

Hot madeleines fresh from the oven are a welcome end to the meal.

Fast forward 3 years and and 8 months..

When I asked our waiter what was unmissable from the starters the immediate thing he said were the cod beignets with parmesan £4.50. He definitely wasn’t wrong as these golden umami laden snacks are a testament to deep frying.

Panko shelled savoury and spicy haggis croquettes £4.50 with house made brown sauce also banged. I could put that brown sauce on everything.

Then came the tagliatelle with melting ox cheek ragu £10. It was decent enough even if the sauce could have done with a touch more reducing to make it more intense and meaningful.

Grilled sirloin £20 was a luscious ruby red in the middle and was anchored with a coarsely chopped chimichurri. Skin on French fries had a terrific exterior crunch and worthy fluff in the middle.

From the sea comes Cornish ray wing £21 with clams and broad beans. It was nice enough, but better value could be had with the steak, £21 for a slither of fish just isn’t my economy – it was a main but I’d say it was the size of a starter, you might be disappointed if you didn’t have a finite appetite.

Minted sugar snaps £4 and peas was stayed a vivid green when they got to us as they should.

It was good to see that fresh madeleines were still being served after all these years as they’re bloody delicious.

The home baked bread of focaccia, Irish soda and sour dough put me into a happy place. I think I might be one of a handful of bloggers out there who obsesses over bread and the versions here are worth perving over.

The cod beignets with parmesan £4.50

Our dinner pal got the cod with arrocina beans, chorizo and lemon crumb £21.

I went for the rustically braised fall-apart ox cheek with lip puckering slithers of pickled onion. Thigh cladding silky creamed potato makes its point too. I love food like this, but the sauce was meek and clearly needed adjusting. It lacked the body and depth needed to bring a dish like this together. More reduction and seasoning was what it deserved.

The French fries £4 with the fluff and rustle.

One thing you’re guaranteed is a sweet-buttery ending here.

When did I go? Nov 2014, July 2018, Dec 2018
The damage: Expect to pay £50/60 per head with drinks
The good: You can come here and get properly fed, there’s poise in the food and the joyful wait staff. My first meal here was stand out and the things to look out for are those cod beignets!
The bad: The ox cheeks were an underpowered let-down, and give us bigger portions of fish, but there’s little else to grumble about.
Rating: 3.5/5
Would I go again? Merchants Tavern has fallen victim to Covid-19 and have now closed. The site is now occupied by Apothecary, a Tokyo inspired izakaya through a Shoreditch lens. The restaurant industry is a restless one.
Address: 36 Charlotte Rd, Hackney, London EC2A 3PG
Web: http://www.merchantstavern.co.uk