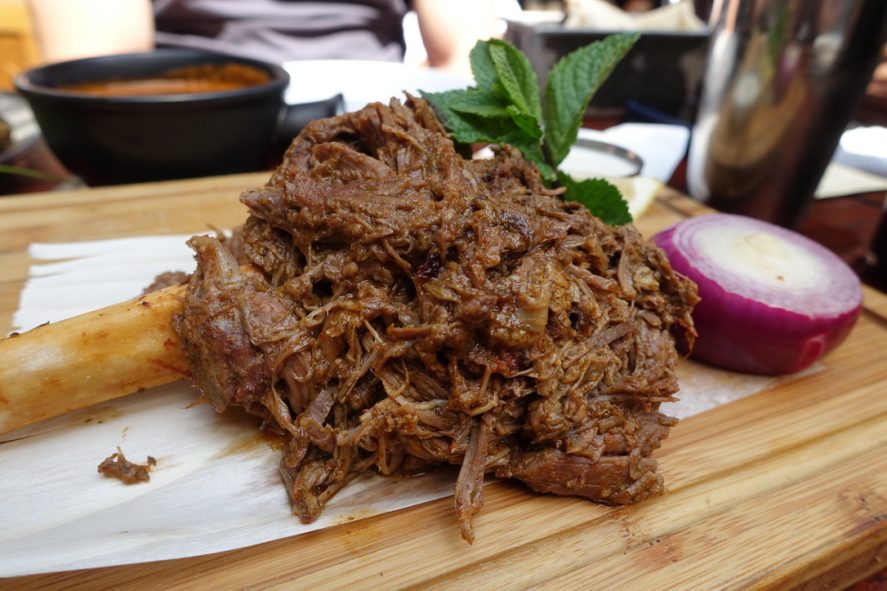 Dishoom is a place where you are guaranteed Indian food, the nation’s favourite cuisine in retro Bombay Cafe style. Their cleverness is connecting Indian roots to the Irani Cafés that live in the Indian subcontinent and bringing it to us. These cafe’s were originally opened by Irani immigrants to British India in the 20th century, they fled Islamic persecution in West and Central Asia. The people of Mumbai accepted them into their culture and borrowed a bit of theirs. Bombay boasts a number of these cafes and the founders of Dishoom brings us its conventions and cuisine. There’s plenty of marble topped tables, chequered tile flooring, oak panelling and silver wrapped industrial piping dominates. We are in Shoreditch after all. I recall coming here in 2012 when they first opened, the queues were ridiculous – they still are. We perched by the bar munching on somasas whilst we waited and got chatting to some ladies who were here for the same. They agreed to have a bet with us that whoever got seated last would have to get a round in. We had waited so long that the bet was forgotten about by the time we were seated. The ladies obviously didn’t forget about us and sent a round of tequilas over. We protested with our thick skinned waitress that they weren’t ours, she was was adamant that they were, but reluctantly gave in and took them back. What a bunch of plonkers we were.

Lamb samosa’s are hot from the fryer, crisped, crunchy and energetic with spices. They are savoury snacks for adults.

In a similar vein the vegetable samosa’s £4.20 are ripping hot from the fryer and the warming spice of cinnamon and cloves lift the potato-pea filling.

A side of welcome chutney’s hit the spot. I gravitate towards the tamarind one always.

What I came here for though was the lamb raan £22.90 – a Shoreditch only dish of overnight braised spicy lamb shank. Before serving it get’s a good caramelisation from flame-grilling making the whole thing extra unctuous. It’s a gutsy thing to eat full of spicy flourishes and stickiness.

We order roomali roti £2.90, hankerchief thin blistered bread with a perfect chew, conducive of the chef knowing how to work the proteins in the dough. It’s of strategic importance to order them for scooping lamb raan. My fingers reek of spice but I’m loving life at this point and not caring.

Masala prawns £11.90 are blackened and spiced in all the right places. Grab one by the tail and crunch on that pert fiery flesh.

House black dahl £6.20 is another signature dish which is cooked for 24 hrs. It’s more than a bowl of creamy dahl with roasted dark spices, it’s a colossal flavour bomb that can’t be missed.

Lamb chops (£4.30 per chop) get the overnight treatment in lime, roasted spices with lashings of ginger and garlic. There is also a fiery blackened crust that hits you like a jolt of adrenaline which is tempered by more fresh pomegranate seeds.

Fourteen months later and I’m back.

Of course I ordered the lamb and vegetable samosa’s which are some of the best you can get in London right now.

Get the behl too.

This time we ordered the chicken berry Britannia £10.90, a biryani of sorts with cranberries cooked in a pot sealed with pastry as it should. It was ok, albeit a tad ordinary against the other food we ate.

And no meal is complete without the masterstroke lamb raan.

Or the roomali roti – you can’t have one without the other.

When did I go? July 2018 and Sept 2019
The damage: Expect to pay £30/50 per head with drinks
The good: There’s lot of rib sticking, love handle cladding fun to be had here. Let’s take the lamb raan, those roti’s and sense assaulting behl as fine examples to the argument. The samosa’s are killer too and before you get to the tongue thrilling lamb chops, boisterous masala prawns and colossal flavour bomb you’ll find in the black dahl. Food like this just makes London a better place and its friendly on your wallet.
The bad: Not a lot aside from the flipping queues.
Rating: 4.5/5
Would I go again? In a heartbeat
Address: 7 Boundary St, Hackney, London E2 7JE
Web: https://www.dishoom.com/shoreditch/