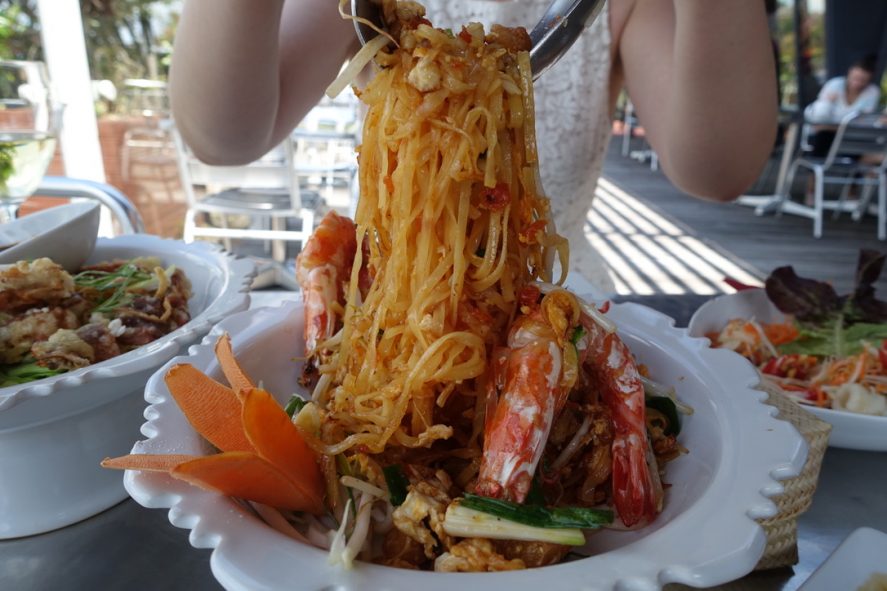 The Thai Terrace in Guildford is gargantuan – it’s like one of those new foodhalls up in town except that it only serves Thai food with a few more miles on the clock as our waiter informs us that they’ve been trading for well over 10 years. He also told us that the food is authentic, just like how they do in Thailand. Let’s see about that but who cares if it tastes good. From a locality perspective, what makes it unconventional is that it’s located on the 7th floor of a multi-story car park. Not only-but also, it ticks quite a few boxes too for a good day or night out; there’s a koi pond, as who doesn’t like ornamental fish, a roof terrace overlooking another carpark, cocktail lounge and a plush dining area. It’s a place where I can see locals settling for the night. I’m obviously here for the food as that’s what matters right.

First up was the som tam seafood, a papaya salad with all the trinkets – peanuts, shredded carrots, green beans and chilli in a puddle of tamarind and lime dressing. When I’ve had these salads before in the past they’ve always had colossal heat – I say in the past, I mean at the likes of Smoking Goat, Som Saa and Kiln et al. This version was sweet, overtly sweet. You’d like it if that’s your bag, it’s just not mine. The soft wrinkled folds of squid were nice though as were the pert prawns, the advertised scallops went walkies though.

T.T soft shell crab £18.50 were big fist sized crispy crustaceans that they slightly on the under seasoned side, but a side of “roasted sweet chilli dip” solves that. Sweet being the operative word, the dip was like a jam made with a cauldron of sugar. I’m a whining sod but you probably get my point, I like balance and have given up confectionary.

Seapking of sod, we also order the pudd-Thai goong sod £14.70, what’s there not to like about pad Thai? The noodles were exceptionally well made in this dish, they had a really nice tension and bite to them. Beansprouts gave their crunch, spring onions gave their fragrance and spongey tofu gave a welcome squish. I don’t need to tell you that it was quite sugary. I won’t talk about the big prawns much as they were a tad bland. Size doesn’t always matter you know.

Then came the moo pudding makeua yao £11.95, which were slithers of pork, aubergine, peppers and onions stir fried in a viscous syrupy sauce – this one was probably the worse of the bunch and eating it was tedious for my teeth.

When did I go? July 2018
The damage: Expect to pay £35 per head with water
The good: Despite being in a massive multi storey car park, the venue was quite decent. I didn’t see any spectacular views of Guildford though, just another car park and the roofs of peoples houses. The dish that was semi decent was the pad thai with its perfectly cooked noodles.
The bad: The meal I had was loaded with cloying sweetness, I think the chef was a tad optimistic with the sugar and wanted to put us into a sugar coma – they succeeded. It’s a place where your molar’s come to die.
Rating: 2.5/5
Would I go again? Still deciding…
Address: 7th Floor Castle Car Park, Guildford GU1 3RW
Web: http://thaiterrace.co.uk