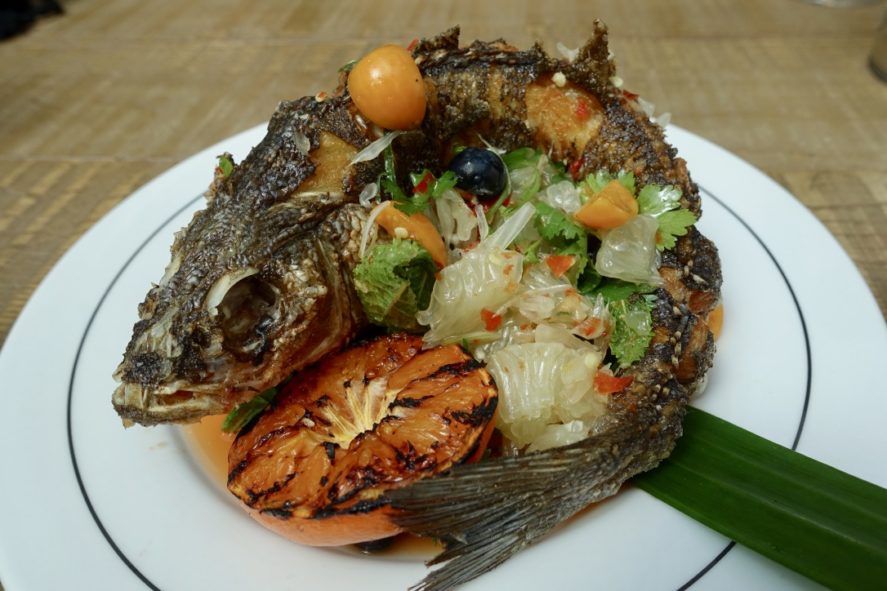 Pizza, regional Thai, a deli, kebabs, buttermilk fried chicken, poké, BBQ, Indian street food and ice cream all under one roof? Yeah is happening Fulham Market Halls (est May 2018) right now and two other places; Victoria Market Halls (est November 2018) and one in the Westend (est November 2019). The creators are property investor Andy Lewis-Pratt and restauranteur Simon Anderson who is known for Pitt Cue. And what a place that was. The concept is to join forces with restaurants along with up and coming newbs from the food community and give us a broad brushstrokes of world cuisine. Different strokes for different folks let’s say. Market Hall Fulham is where I’m at to check out a handful of what’s on offer. Even a greedy sod like me can’t eat at all of the ten kitchens, so I did my best in covering as much as I could at the old Fulham Broadway Station’s old ticketing office…

First up was Calcutta Canteen – the sibling to Darjeeling Express of Kingly Court and what a mighty fine place that was, all run exclusively by ladies. One of the stand out dishes there were the Tangra chilli prawns and they’ve got them here too. I don’t blame them. In Calcutta, the Chinatown is in the region of Tangra, so this dish is an Indo-Chinese take on how to cook the freshest prawns. They sear them in a hot pan with the aromatics of Indian chillis, giving the pert prawns a good old roasting like how you get in a wok. The result is fiery, sweet and simply addictive.

Thīmā is the sibling to Farang, another brainchild of Seb Holmes, the impeccable young chef who specialises in regional Thai food. He honed his craft at the likes of Begging Bowl and Smoking Goat.

We tried their whole crispy sharing seabass £14, which is much more than what the title suggests. It comes with a lively bite of sour fruits, Asian herbs, a salty punch of fish sauce, and a fiery chilli & lime dressing that thrills your tongue. The bass is fried to a crisp, so all the moisture is sealed in, yet the exterior bones can be nibbled on as snacks. It was the stand-out thing to eat of day. It’s advertised as capable of serving 2-3 mouths, I strongly disagree, get it for yourself a whole one and you’ll thank me later.

Fanny’s Kebabs sounds like the unspeakable, but actually it’s a group of folk who want to spread gospel at how good Middle Eastern food can actually be. They’re spread across 6 locations, including all 3 of the Market Halls and were spawned in Stoke Newington.

We tried some sweet potato fries £3 that make their point by being hot, crispy and down-right delicious. They we’re testament to how humble things can be so tasty. Their hummus and flatbread £3.50 were brilliant too. The chewy folds of bread were the best at scooping up the creamy spun chickpeas and pomegranate. The falafel usually come in a kebab but they were kind enough to do us a little pot of their spiced crisp balls of joy on the side.

So that concludes my visit to Market Halls Fulham. The people of Fulham are lucky to have this on their doorstep.