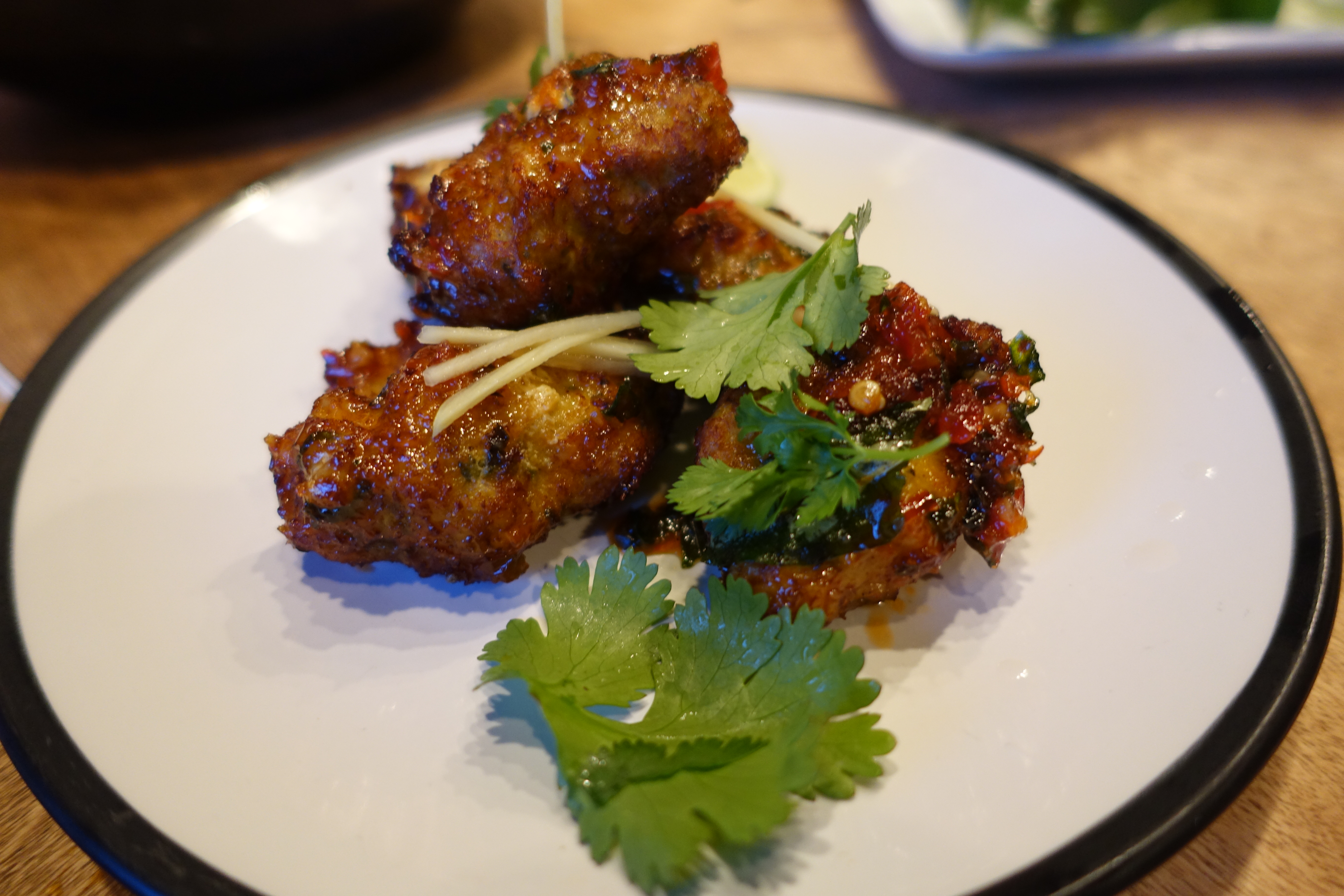 Chef Seb Holmes’s (try saying that fast 20 times!) Thai cooking credentials started at Peckham’s stalwart The Begging Bowl. He joined shortly after it opened in 2012. After two and a half years there he moved-on to become the Head Chef at Smoking Goat as well as working with Andy Oliver at Som Saa before it became permanent at Commercial Street this year. His new project Farang, colloquial translates to ‘foreigner’ in Thai launched in March 2016. It focusses on pop-up events all around town. I was lucky enough to try his food at The Lodge in Clapham back in April this year. The meal commenced with this interesting looking concoction – it looks as if it shouldn’t contain any alcohol at all but it does.. It was a palate livener of Goji berry reduction and plum bitters. The menu is akin to those you see in dim sum houses’ with a box to number how many of the respective dishes you want. Fish balls and sweet chilli lime were a concoction of salmon, cod, chillies, pan chi faring, turmeric, garlic, palm sugar and tamarind (£5). The gnarly looking fish balls were a highlight, so exemplary that we ordered two, so should you. Sticky pork and pumpkin with spring onion and Chinese chive – braised pork belly and salted pumpkin with palm sugar, cassia, oyster sauce & bay leaves. (£6) The belly was practically pure fat with a thin line or two of protein, it was almost wine gum like in texture but flavourful nonetheless. We were intrigued enough to order it again and got more pork belly over the pumpkin – we didn’t complain. On the menu this dish is reads  ‘Nham prik ong with Asian vegetables and grilled sardines – a rich minced pork and tomato relish with dried soy bean raw vegetables, Asian herbs and grilled sardines to dip’ (£8). Truth to be they’d run out of sardines and offered us half a mackerel instead which we happily accepted. Why didn’t they give us a whole piece instead of half? It would have kept the fish more moist IMHO. The highlight of the dish was the nham prik ong, actually to be honest it was the highlight of the meal, it was uncompromisingly good with deep smokey umami flavour – someone had to pull me up for air. Nham prik ong – living to eat with this bowl of flavour. It truly was a hands on affair, tearing raw cabbage to scoop was hilarious and delectable. Salted tumeric butter roti. (£3.5) I’m not sure how an Indian flatbread makes features in a Thai street food inspired menu, but was opened minded. The bread was oily and uninspiring – sadly the kitchen came in on the back foot with this one. Crispy vegetable wontons with sweet chilli dipping sauce – crispy wonton parcels stuffed with fresh herbs, Asian vegetables and spices (£5). An interesting snack and sweet chilli that carries some good flavour unlike the stuff you get in bottles that makes your teeth ache from all the sugar it contains. Pickled ginger, Thai shallots and cucumber. (£2.5) I’m not sure what sort of impact this side dish makes, probably a minimal one. Add it to something else and it will be just fine as it’s not winning alone. Fried seabass, sour fruits and green nham yum – whole crispy sea bass with sour fruits, green chilli, lime and mandarin dressing. (£13) Chilli punch, vibrancy with the coriander, mint, shallots and acid from the fruits. The flavour is vivid, bold and wonderful. It’s fried so crisply that you can nibble on the bones as a crispy snack. Fresh doughnuts, kaffir lime & apple jam with coconut pandan custard. Tasting the custard alone wasn’t pleasant – I got this grassy, woodsy flavour but combining everything in one bite, it started to make delicious sense. Cherry aperitif to wrap things up. Where is Seb hiding? Here he is and a thoroughly nice chap he was. We spent a few moments chatting away whilst he had his mum ‘Vicky’ doing the washing up in the background! The damage: Expect to pay £20-25 per head with drinks
The good: This style of cooking is certainly a renaissance for me personally as Thai food in London had became too predictable in all of its riffs. Everything seemed to be focussed on the Western palate, diluting its authenticity. It doesn’t seem this way here though as the flavours (especially) from the Nham prik ong, seabass and fish cakes were a riot in flavour and texture.
The bad: The service was questionable sadly, our 2nd order of fish cakes didn’t arrive until 30 minutes later, as did our 2nd order of pork and don’t get me started on the wait for the bill! Service aside there were some duff dishes amongst some very good ones, most notably the dry mackerel and pointless roti bread.
Rating: 3/5
http://www.faranglondon.co.uk
FARANG LONDON LTD
Check social media for pop-up locations
Phone: 07903834808
E-mail: info@faranglondon.co.uk