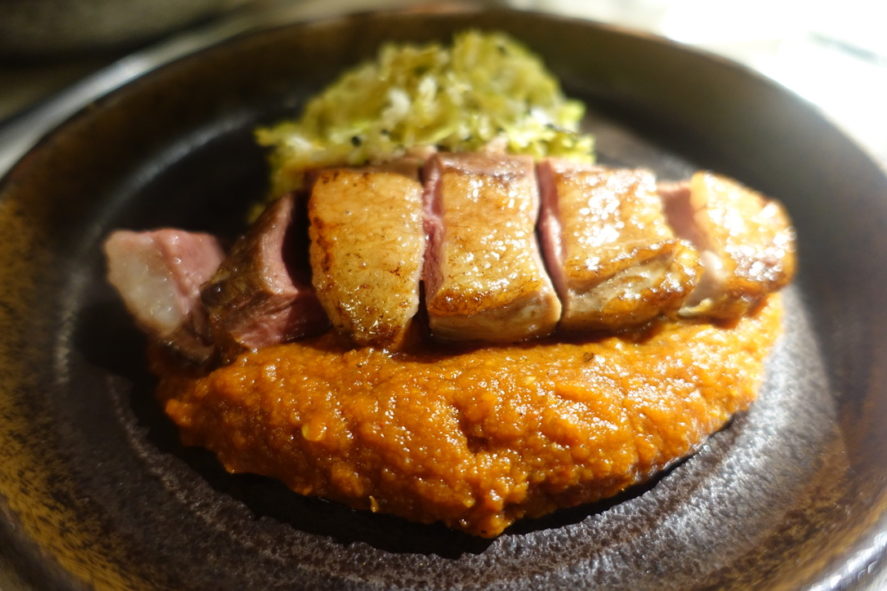 Kricket on the face of it seems like the well-worn sock of all cliches. Once upon a time they were a pop-up in a shipping container; the founders were college friends; it’s a small plates concept; food arrives in no particular order; they have a chef’s bar a la Barrafina and so on. I think you get my point. Yes it’s Indian, but there’s no belly busting naan breads or mystery sauces, poppadoms or mango chutneys – what makes them stand out is the vivid food they serve up. Let’s take the scallop with madras curry butter that comes with a good tongue pucker of elderflower vinegar; bits of fried scraps left from the fryer – a case where throw-away bits become prized bits. Then there is the deeply addictive Keralan fried chicken with curry leaf mayonnaise and pickled mooli. Oh and I have to mention those samphire pakoras which you’ll see shortly. Being different on the food front is the feather in the restaurants cap. The founders are Rik Campbell and Will Bowlby – Will aptly did a two year stint as a chef the now defunct Cheval Bar in Mumbai. They opened Kricket Soho in January 2017, Kricket Brixton in May 2018 and Kricket White City in September 2018.

The samphire pakoras are crispy and have the depth of roasted spices in the batter. The salinity of the samphire that grow by the sea are cut with the sweetness of date and tamarind chutney. As they come they are hugely compelling, but there is a pot of pungent chilli garlic mayo to fend the vampires away.

Karnatakan mussels £10 are also richly spiced, plump and bloody morish. We found ourselves sucking at the shells and scooping the sauce with them. By this time we were smelling of rich spices and happiness.

The brown crab butter naan £4 is meltingly fresh, is all about chew, smokiness from the coals and the subtle funk of crab fat.

Maria seems to be in her element!

Keralan fried chicken £8.50 is golden, craggy, intense and moist. The curry leaf mayonnaise it comes with acts as lube, but I don’t think it needs it. What I would say though that the pickled mooli should be more than just a garnish, they’re delicious in their own right and gives a cooling edge. They should more on the plate god dammit.

Goose vindaloo comes with nicely rendered skin, more heat would give it a crispness, perhaps more resting would give it more tenderness. I’m hard to please. Now we’ve got that out of the way, the flavours are proudly encouraging and rewards you more the more you chew. The thick vindaloo sauce is a marvel, full of nutty spices and umami. The sprout thoran is a slaw that reminds you that it’s winter, but I’d happily eat it anytime.

This time we sat downstairs.

The first to arrive was the scallop served in its shell with madras curry butter and lots of it judging by the pool is sheen it’s sitting in. Elderflower vinegar gave some urgency and the “scraps” were like those odd bits of golden batter that your local chippy would fish out of the fryer but with spice. We were the beneficiaries of recycling and I’m fine with that.

Corn kunchumber £7.50 was what our waitress recommended. It was shards of deep fried kori roti made for scooping a corn purée malai style, make sure that you get the corn chutney on each bite too as it was the point of difference that didn’t make it boring.

Bread wise we got the date and pistachio £4 and masala kulcha £3.50. The former was the one I kept going back for, what they do really good here is the bread. It’s full of character and chew – all the things I like.

Of course we had to get the Keralan chicken £8.50. Although this time around, it was treated to some extra Salt Bae action making them quite jarring.

Gana’s coorgi pork cheek £11 was slow cooked to a luscious jiggle and came with an intense masala of sorts. Pickled fennel gave a spritely kick. I dredged and dredged the bread into it.

Smoked sweet potato was soft and was an intense version of itself. The sesame raita was like tahini and the rich, sticky caramelised onions gave their indulgent sweetness. The menu said it also came with “gunpowder” that was no where to be seen.

When the aged beef sheekh kebab £11.50 arrived, my delightful friends said it looked like the unspeakable. I couldn’t argue with them. What it tasted like was a dank unloved piece of meat. There are times a kitchen should hold back on serving things and say; “let’s try this again”. This should have been one of those times. It could have done with a good char so the flavours and spices flourish.

Here are the samphire pakoras again £7. They taste like the best Indian chef decided to go foraging in the marsh rocks and apply the magic roasted spices can bring. They combine the coastal air as well as the indulgence from the Indian subcontinent. My only annoyance is that they were overtly salty this time around.

When did I go? Dec 2017, Sept 2019
The damage: Expect to pay £30/45 per head with drinks
The good: What they do brilliantly to the core here is the the use of British ingredients boosted with the amazing flavour of Indian spices. There’s obviously a whip of modernity in the Indian inspired cocktails which I’m yet to try, but some things to get are the Keralan chicken, samphire pakoras and those breads. I’d happily come here again for those.
The bad: Avoid the aged beef sheekh kebab. Oh and this is a message to the kitchen – go easy on the already salty samphire.
Rating: 4/5
Would I go again? Yes
Address: 12 Denman St, Soho, London W1D 7HH
Web: https://kricket.co.uk/soho/