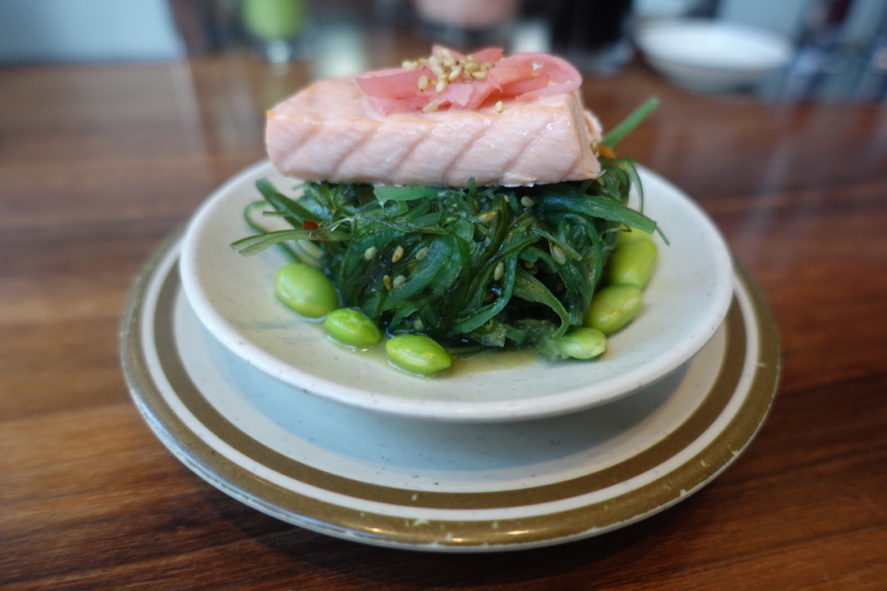 K10 Broadgate has been doing its thing since February 2013, replacing Ping Pong, the very bang average dim sum chain. The restaurant with its sushi conveyor belt is enclosed in a sleek glass panelled building across two floors, and its always rammed during lunch service. You might remember from a previous post that Beer and Buns is upstairs, they do virtuous things with wings and Japanese draught. Christopher Kemper is the founder of K10, he’s also former YO! Sushi development director.

In typical conveyor belt style, you’ll have to use an educated guess as to what things are and the colour of the plate denotes its price.

Soft shell crab is an ingredient I love in all it’s majesty. This one hits you like a feather duster though. It’s not unpleasant, but it limps off the conveyor belt in comparison to others I’ve had. At least the maki is wrapped tightly and most things taste good with soy and wasabi.

The reverse tuna maki was serviceable and filled a hole.

Things got good with steamed salmon, it was the right shade of pink, moist in all the right places and was on a bed of my favourite seaweed salad – rice vinegar marinated wakame coming with a back hit sesame and edamame beans for nuttiness.

Some sort of beef carpaccio with a tangle of crispy noodles, it was snapped for reference purposes

Tempura salmon maki drizzled with spicy mayo was the best of the bunch, it was cooked to seductive pink

Chicken katsu had a golden crisp crust as it should, but why on earth did they use pounded breast meat is a puzzling move for me. It becomes dry and leathery – hope is the lubrication of curry sauce which comes in a pot of on the side.

You would of thought that my lesson would have been learnt already with the soft-shell crab, but it was the best out of the mediocre bunch so stupidly, I got it again. With lots of soy and nose tickling wasabi, I soldier on and fill that hole in my sizeable belly.

When did I go? Dec 2017
The damage: Expect to pay £20/25 per head without booze.
The good: If you’re after some utility-level sushi, katsu or teriyaki to fill a gap over you lunch break then this might hit the spot.
The bad: There’s no culinary cartwheels, but you can’t have it all in life. Apologies if you love it, I won’t judge you and there won’t be any tears if you judge me.
Rating: 2.5/5
Would I go again? I’d head upstairs for the wings in Beer and Buns next time.
Address: 3 Appold St, Hackney, London EC2A 2AF
Web: http://k10.com/k10-restaurants/k10-appold-street-broadgate/