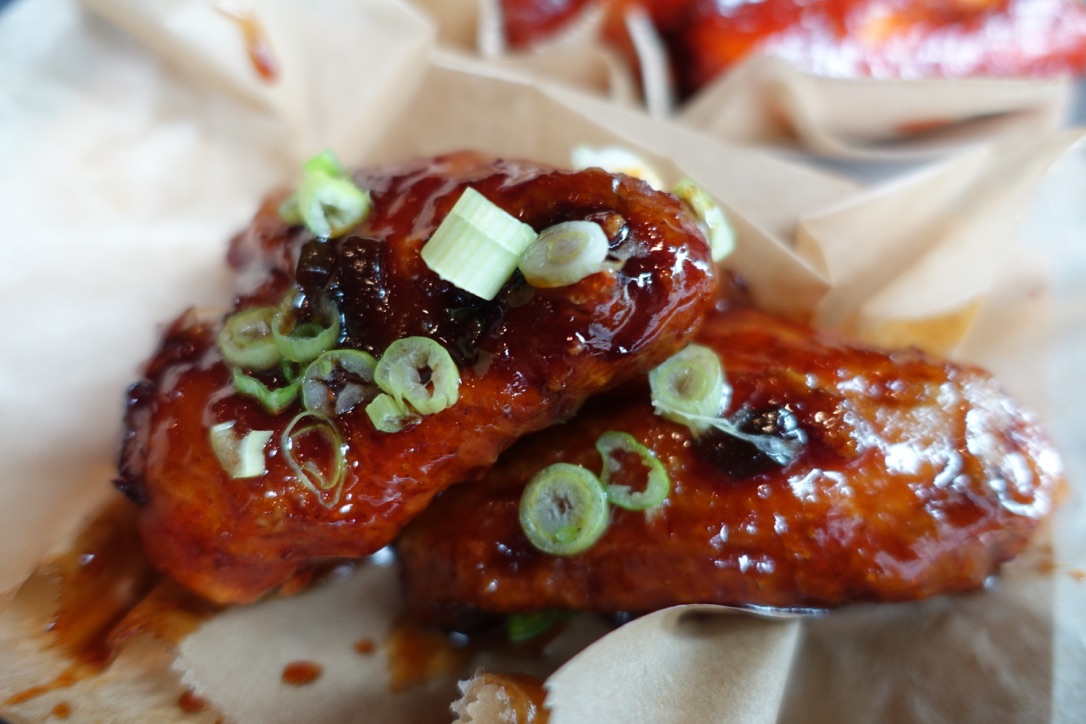 Beer and Buns is the long term pop-up, come permanent resident above conveyor belt sushi favourite K10. It’s been knocking around for the past 3 years or so now and aims to deliver an Izakaya style experience right on the cusp of the City. It’s not the easiest to find, but head towards K10 and you’ll see the signs that takes you upstairs to the black painted room, chalked with funky art work. Inside there are make-shift steel drums that could seat 4 at a stretch, bench style seating, pinball machines and blaring music. Drink wise it’s all about Japanese craft beer, possibly the most I’ve seen outside of Japan! There’s Niigata, Coedo and even Owl Hitachino on tap – wow. The food is hands-on, no nonsense stuff, that ranges from delectable sweet potato fries, to some of the best double/triple cooked wings in London, coated in moreish sauces such as “hot & spicy”, “tabasake soy garlic”, along with “Korean Hot”.  And of course Hirata buns which originate from Fuzhou in China, known as Gua Bao over there, but Japan’s colonial occupation of Taiwan meant they borrowed the concept and named theirs “Hirata”. Let’s just call them Chinese Hamburgers.

Sweet potato fries with spicy mayo £3.50 were hot, crispy and perfectly seasoned as were the edamame beans with Malden sea salt £2.95.

The B&B signature bun is a karaage with Japanese yuzu koshu slaw £3.95. The moist nugget of chicken thigh is coated in batter and fried to a perfect doneness and you’ll get a blast of freshness from the slaw too.

The chashu pork belly with braised red cabbage & mustard £3.95 cries out to be ordered but the result is an un-yielding piece of meat that that sits between good and unpleasant. It just needs more cooking.

On the specials was a bulgogi beef bun with spicy kimchi. Just like the pork it would benefit so much from an hour or so more cooking as the toughness was too fibrous and didn’t fall about in your mouth. (Massive sigh).

My favourite of the bunch was the aubergine katsu with coriander salsa and miso £3.95. The clever play on the soft aubergine, crispy exterior and hit of freshness from the salsa that totally won me over.

Jumbo wings in Korean hot, tabasake soy, along with hot and spicy. They had all the flavours you could ever need on wings, umami, some heat, sweetness and savouriness. The flavour zings and coats your palate. What is really attention grabbing is how crispy the things are, you know they’re good as writing about them makes you salivate!

You can have them naked if you’re frigid.

Clean as a whistle.

New to the menu is the ebi katsu £3.95 which is shrimp in case you’re wondering. But as you can see there is a whole lot more katsu than there is shrimp! It was quickly inhaled and forgotten about.

The aubergine is the best.

The tabasake soy garlic is my chosen one.

Korean hot is laced with gochujang.

Hot and spicy – its hard to tell which one is which!

This time though, it’s in the evening which is a first for me and it’s good to see it bustling.

The menu has expanded.

The chashu pork has remained consistently unyielding – so seemingly it’s popular how it comes.

When did I go? Oct 2016, Mar, May, Dec 17
The damage: Expect to pay £25-£40 per head with a craft beer or three.
The good: If you’re after craft Japanese beer with drool-worthy Korean chicken wings cooked 3 times so the meat falls off the bones, come here. I can’t argue that beer and buns represents Izakaya culture in this neck of the woods in style.
The bad: The buns aren’t bad in general but the meat ones need a bit more slow cooking IMHO.
Rating: 3.5/5
Would I go again? You don’t need to ask me twice!
Address: K10, 3 Appold St, London EC2A 2AF
Web: https://www.beerandbuns.co.uk