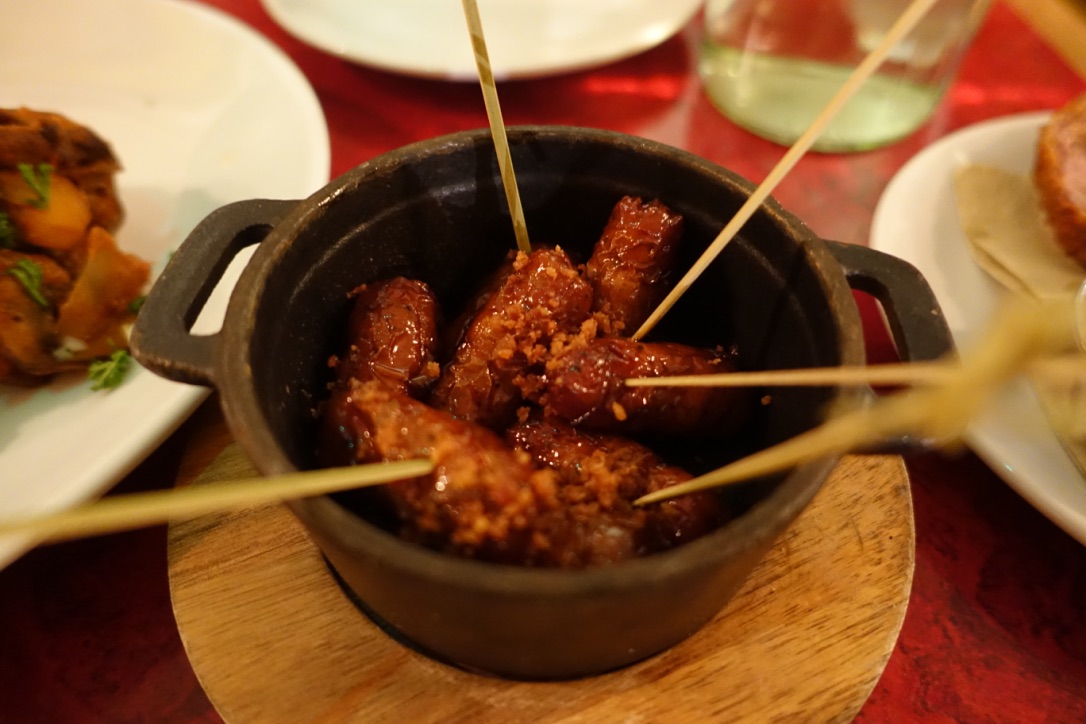 I’m not shy about poking my nose around the SE1 area as it’s spoilt with brilliant places to eat – Bermondsey in particular has been beating it’s drums loud and clear too with some hard to ignore places of recent. I’m here for Tanner & Co which is an old converted warehouse come boozer/ restaurant with event facilities. The multi coloured tile bar was heaving when we arrived along with the dining area, all of the booths filled up. Signs are good.

One of my faves – love the stuff!

First up was the grilled gammon chop with duck egg, pineapple and chips £16. A classic in its own right and deserves respect, I hope you agree? The gammon though had enough salt to sink a ship, I couldn’t drink fast enough to get rid of the horrid taste. A shame really – perhaps they didn’t simmer away the salinity from the the gammon? Either way you’d expect more skilled cooking.

Devilled mushrooms on sour dough £7 sounded luscious, the result though had me weeping as it tasted like it was from a can, it possible was. The mushrooms were textureless and what seemed like the flavour of spaghetti hoops overpowered the palate. It was repeating on me for days. I’m really surprised that the kitchen let the dish out!

The scotch egg with mushroom ketchup £6 came with the perfectly cooked egg and crispy exterior that went well with the tang of the ketchup. The sausage meat was decent too. Some nice cooking does exist here.

Pigs with bacon bits and honey mustard £5 were simply divine, we kept stick poking them until the skillet was empty – they had all the delicious savoury & sweet notes that the palate craves during boozing in the pub.

The first bill they brought over was incorrect – although more reflective of how much we should have paid for the meal.

When did I go? Oct 2016
The damage: Expect to pay £30-£35 per head with a drinks
The good: The converted warehouse has tonnes of character and I can understand why this place can be popular for local folk, it’s nice space. The pigs with bacon bits were on song and I’ll go back for more.
The bad: It’s difficult to get simple, heart pleasing pub classics wrong, they did so here though. Sadly much of the food was unappetising and a total waste of calories. Spend your cash somewhere else.
Rating: 1.5/5
Would I go again? Meh
Address: 50 Bermondsey St. London, SE1 3UD
Web: https://tannerandco.co.uk