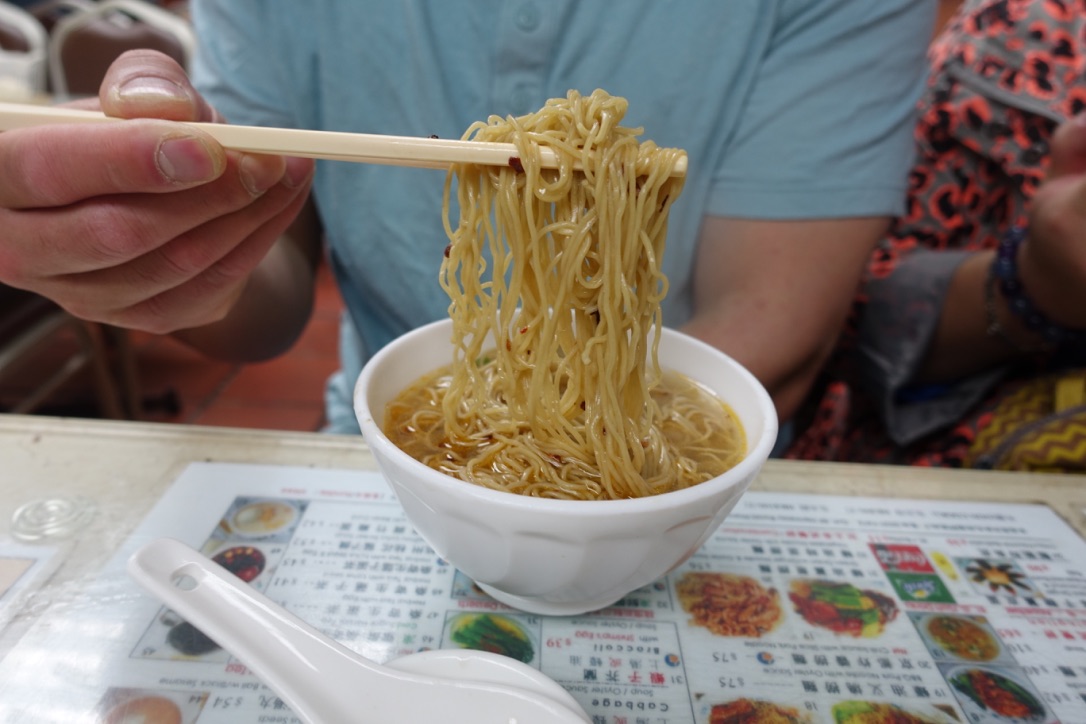 Bib Gourmand rated Wing Wah is an institution, not just for the time it’s been around and the popularity of their won ton noodles, but for their huge contribution to making the famous bamboo-pressed noodles from scratch since 1950. Upon writing this though, I’ve learnt the sad news that it will be closing its doors for good from the end of August 2018. The restaurant’s third-gen proprietor, Tse Sau-hong, aged 68 just wants to hang up her won ton boots, at that ripe old age, I don’t blame her. A shame really, but I feel that it’s important to share the restaurant’s spirit and the dying art of bamboo pressed noodles, which is much loved by Hong Kong’ers. The interior, seemingly, is largely untouched by time and I can imagine that this is exactly how it was in the 1950’s. The the idea is to bounce on the bamboo pole to tenderise and fully mix the noodle dough. It looks flipping painful! The plain noodle $40 had to be ordered to experience the bamboo technique in all its glory. The texture had a nice al-dente bite, but it was missing the crunch you’d expect, the same crunch we had at Mak’s the night before. Tendon and brisket $130, was more tendon than brisket, speaking openly too, it was just a tad insipid and lukewarm.. Big, big sigh. The kai lan with ground shrimps egg and oyster sauce $36, were stellar, cooked so well and strangely my favourite things to eat! When did I go? Nov 2016
The damage: Expect to pay $90 per head for what we had (£9ish)
The good: It’s a total honour to experience the dying art of bamboo pressed noodles, but the meal wasn’t on song, some hits and misses meant that it wasn’t that impactful.
The bad: The brisket which is a staple in wonton joints, was crying out for the magic of more aromatics and seasoning. Sadly too, the noodles were overdone.
Rating: 2.5/5
Would I go again? N/A
Address: Hong Kong, Wan Chai, Hennessy Rd, 89號
Phone: +852 2527 7476