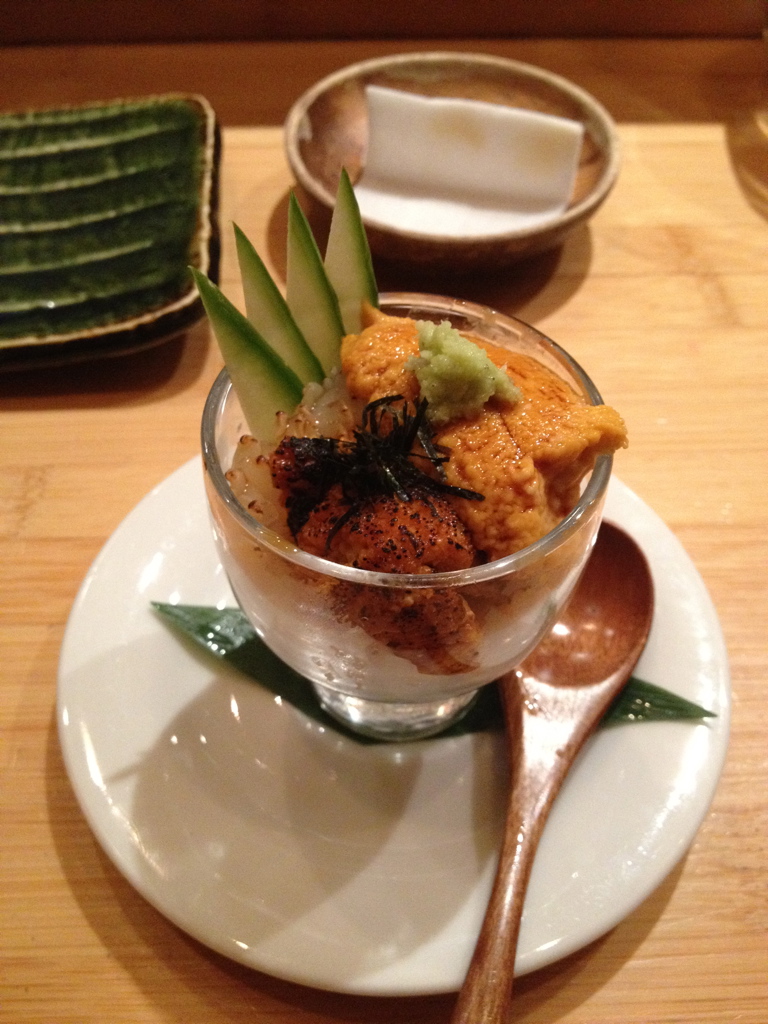 Jewel Bako has been around since the turn of the century, 2001 to be exact and it’s owned by husband and wife team Jack and Grace Lamb. You come to this East Village institution for sushi, crafted by Chef Mitsunori Isoda who delivers traditional sushi in a modern way. Ingredients are seasonal, flown over from Japan where possible and the wasabi root is even hand grated with shark’s skin right before you around the omakase table. I dined here during March 2013. We go for the omakase at $75 per head – a variety of fish is served including medium to fatty toro, uni and squid. 17 pieces came and here are some of the hand-crafted treats. An amuse bouche of tuna over a crispy rice ball should never go amiss as they’re delicious little things. After the omakase and witnessing a plethora of reverse maki roles being made throughout our meal, food envy kicks in, so an order of Japanese snow crab with avocado and cucumber rolls $20 were added. The sweet crab seasoned with mayo disappeared very quickly and plugged that final hole in my belly. The verdict:
When did I go? March 2013
The damage: Expect to pay $100+ per head for the omakase with drinks
The good: I must confess before I came here I was somewhat an amateur when it came to Japanese dining, in particular with sushi. Having experienced an omakase for the first time here whilst witnessing the endless craft the chef’s apply right before your eyes was compelling in itself. They’re not shy here with the amount either, I believe we had 17 pieces in total which is enough to leave you satisfied. The service was also impeccable.
The bad: Speaking openly I wasn’t blown away by my experience with the omakase here, and was in constant food envy mode, when plate upon plate of rolls were being made in front of us for the other punters. And when our snow crab rolls did arrive they were a little disappointing, as was the fact that they didn’t have any geoduck available either meant for an anti-climatic meal.
Rating: 2.5/5
Would I go again? Maybe
Address: 239 E. 5th Street, New York, NY 10003 USA
212 979 1012
http://www.jewelbakosushi.com/