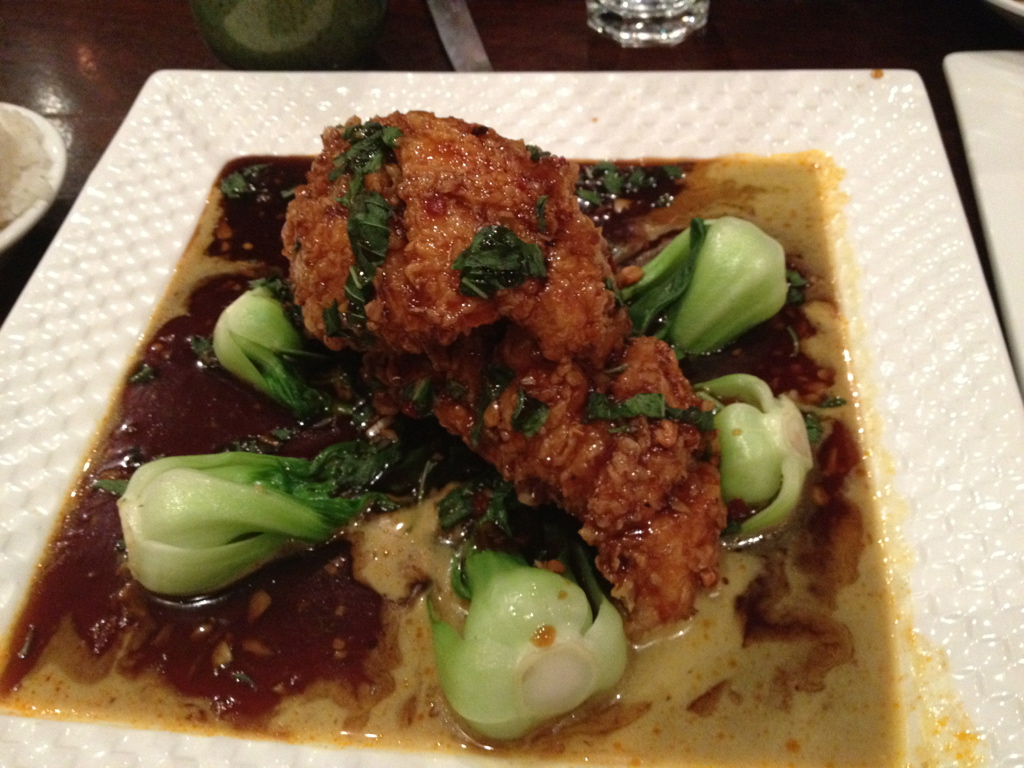 Sometimes when you’re hunger-over, jet-lagged or feeling work-shy about getting your next meal and need something on your doorstep which is half decent then Wild Ginger may be just what you need. It was hitting the chord for me since I was going through all of the above and my hotel was based close by. And most of the time, Asian food hits those hunger pangs. It’s a fusion of Thai, Japanese, Chinese, Malay etc. There’s nothing wrong with that. Kicking things off with a glass of ice cold Asahi beer is never a bad thing.. Shrimp Pad Thai $13 – it’s ubiquitous for a reason, it’s pure comfort on a plate. This variety might be sweeter than others, but the wok flavour seemed to be there and when you’re starving after a flying from London this is what the belly craved. I’m always belly-led. Unagi Don $18. For me this is an icon dish in Japanese cuisine, if it’s on the menu I have to order it. And it’s good here, the rich buttery eel had a good coating of that sticky unagi sauce – I would have liked it with more though. The rice is also the sticky authentic short-grain variety and it comes with pieces of tamago and pickles. Seaweed salad $4.75. It’s the wakame variety and I first tried it in this very restaurant back in May 2011 and was so smitten. I practically ate it everyday. The crunchy texture akin to jelly fish is seasoned with sesame, rice vinegar and chilli, which was all it needed to make it one of life’s mouth pleasures. Although the portion was twice as big back then! Eel with avocado maki $6 and spider maki $7 (fried soft shell crab, avocado, cucumber, tobiko, lettuce & scallion with eel sauce). They will never feature in a chef’s omakase but that’s besides the point since they’re pitched at a level where it’s supposed to be just good, great value and pretty tasty. Gyoza $4.95 – no impact was made with these insipid little things. I would avoid as better ones can be had elsewhere. Spider maki roll $7, Tiger roll $14 (salmon, tuna, avocado on the inside, topped with salmon, tuna, eel crunch, tobiko and scallion); Neptune roll $15 shrimp tempura, snow crab, eel, avocado, tobiko in seaweed, glazed with special sauce. Granted they’re not made with the finest ingredients flown over from Tsukiji fish market but they served a purpose, were fun to eat and filled a hole. The random cream cheese in the Neptune roll was a little off-key though. Crispy red snapper, caramelised soy syrup, Penang curry rice wine vinaigrette, sautéed seasonal greens in black bean sauce $20. As you break into the crisped batter, a whoosh of hot steam comes out revealing the meaty hunks of pearly white snapper. The sauce which coats it has that nice umami taste and is lifted by the rice wine. I’m baffled as to what they meant by ‘caramelised soy syrup’, as even though it had good flavour the viscosity wasn’t there to coat the fish. When did I go? June 2012, March 2013, May 2013.
The damage: Expect to pay $20-$30 per head with drinks.
The good: It was heaving during each of the lunch times I visited but less so in the evening, so it seems like a popular lunch spot good for a quick in and out meal. I wouldn’t suggest it for a long evening dinner, but for smash & grab lunch if you’re in the area. The red snapper is a must as is the seaweed salad, along with the unagi don and the inventive maki rolls. Overall at this price point there is little else you need for a nourishing, rewarding meal.
The bad: If you’re a purist do not come here.
Rating: 3/5
Would I go again? Yes
Address: 226 E 51st, New York, NY 10022.
www.wildgingertogo.com