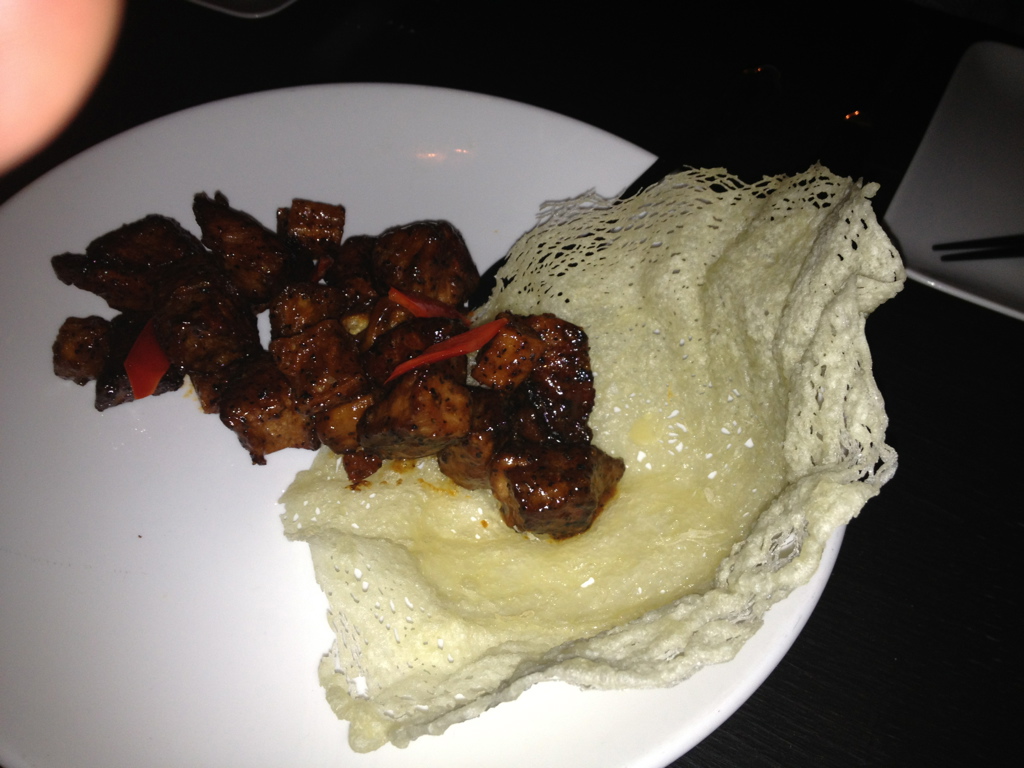 Buddakan is the second of Stephen Starr’s restaurants’ which first launched in March 2006 and is one of the Meatpacking District’s widely spoken of hot spots. It operates in the Chinese domain and is everything you need in an opulent, grand dining hall – high ceilings, chandeliers that probably cost the same as an average family car, an army of servers and a sound system that belongs in an Ibiza club, which booms out very loud lounge music. It doesn’t stop there though, as the bar upon entering the venue serves inventive cocktails with enough style to be sipped at a catwalk show. Before you head down to the main dining room via the stairs, you get a view of sumptuous dining area. If this is your kinda thing, then come and play. Tuna tartare spring roll, crispy shallot, ponzu $15. Tuna tartare rocks and to have it in crispy tube form?  Why not as it works and yes I could have eaten them by the dozen! Lobster egg rolls $15 from the dim sum section – granted you wouldn’t be able to find them in a conventional tea house but it does what it says on the tin, more lobster is needed though! Hoisin glazed pork belly, spicy shallots, cabbage, steamed ‘buns’ $14. Again from the dim sum menu, oddly as it’s not a ‘dim sum’ staple, but this is Asian fusion so it doesn’t matter. During 2013 these were hard to find in London so I had to have them, they were ok but not a patch on the ones at Momofuku from a previous trip. Black pepper beef – wok tossed rib eye, crispy birds nest $26. This is a classic case of East meets West, the soy from the East and ketchup from the West working harmoniously together to bring this dish to our tables. It’s an odd combo but seriously it works and the flavours really dance together. The beef was as tender as you can imagine and was easily the best thing we ate. Wok tossed noodles with prawns, chive blossoms, wild mushroom $12. They used udon here which makes for a really satisfying bite. They were laced with an overpowering sweet sauce, I could feel the enamel on my teeth peeling off after eating it and the dish could have done with more wok-hei. Singapore chilli king crab, cilantro, lime $38. How can this not be good? The empty plate says it all, we all just wished there was more of it at this price bracket. When did I go? May 2013.
The damage: Expect to pay $70-$90 per head with drinks.
The good: If you’re after an opulent dining hall with club volume music along with posh Cantonese/Asian blend cuisine then look no further. Come here if you’re feeling flush.
The bad: I couldn’t help thinking that you’re paying for the surroundings more than the food when dining here, I don’t mind a lush environment but only if the whole experience includes really good food. Alas, Buddakan was a place where I didn’t get this and the only dish that got my taste buds dancing was the overly priced black pepper beef.
Rating: 2/5
Would I go again? Probably not
Address: 75 9th Ave, New York, NY 10011, USA
www.buddakanny.com