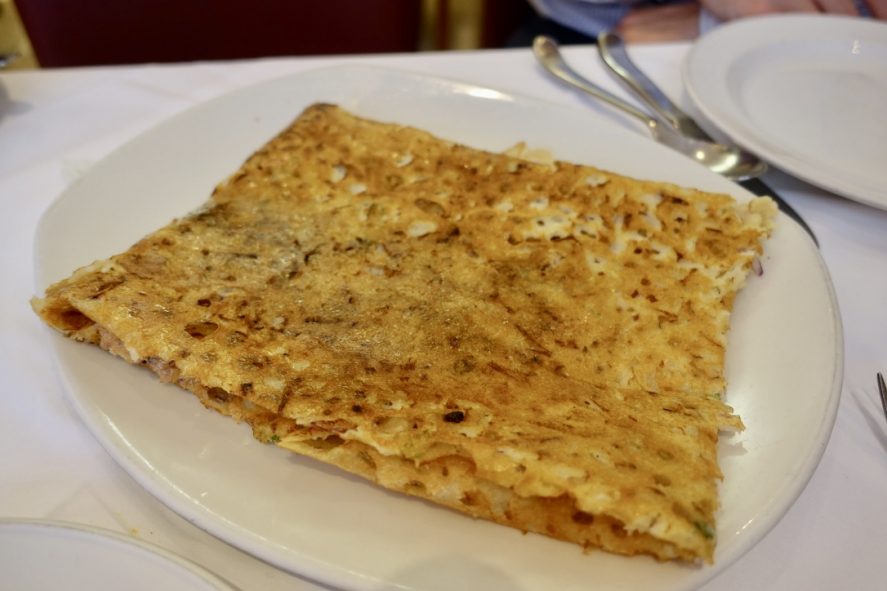 Rasa is conceived from the memoirs of its founder, Das Sreedharan, a man who believes food is “profoundly linked to the importance of our health, our sense of wellbeing, to those we love and the very world around us.” It’s a perfect expression of one man’s lens of food is life, something that I can resonate with. And “when Das came to England as a young man, the food he encountered in Indian restaurants bore no resemblance to what he’d left behind. Bridging this gulf was to be his challenge”. I can definitely see eye to eye with this man here too. Why shouldn’t we get the good stuff from the motherland instead of a bastardised weak version that Indian chef’s deem our palates suitable? Anyway, that’s what I read on their website that got me wanting to try some of his Kerala style cuisine. When you walk inside the bubble-gum pink front, there’s tasteful tapestry, more bubblegum pink walls and faux leather blood coloured dining chairs. I’d say it’s stereotypically Indian, all in good taste.

You have to start with pickles with chutney’s and popadoms don’t you? There’s garlic, mango, lemon, mixed veg and coriander. But no, they just don’t do popadoms here, they do achappam, flower shaped rice flour and coconut snacks peppered with sesame and cumin seeds. Murukku features too, a savoury, crunchy snack, gnarly looking knick knacks. Banana chips are thrown in for good measure as “papadavadai”, a poppadom turbo charged with crunchy batter, cumin and sesame seeds.

Another tasty starter “konju varuthathu” were little nuggets of prawns massaged with spices before their fried with red onions.

In the UK we get sausage rolls from Gregs. In Kerala they have lamb puffs £6.75 as a bakery snack. This is proof that sausage rolls are a universal thing, but this one wasn’t that convincing even when dunked into a pot of spice boosted chutney. The soft pastry and docile filling is the blame.

Mysore bonda £5.50 sounds like you’ve spent too much time on the bike saddle, but actually they’re snacks of potato balls full of ginger, curry leaves, coriander and mustard seeds. You’ll get a pot of much needed coconut chutney too as they’re a little parched, dare I say it, a tad bland too.

Chilli onion rava dosa £11.75 was a lacy, number folded into square, packed full of caramelised onions and roasted spices. On the side for dredging, there’s more coconut chutney, a sambar of lentils and spiced potato masala. I’d say the meal came alive when this dish came.

The adipoli earachi mulegu £11.25 was a lamb curry slow simmered in turmeric water, black pepper, Indian shallots and coconut. It was the sauciest thing we had, but it really didn’t stamp any much need authority from the lack of depth.

Malabar erachi charu £10.50 was a drier curry, spice flecked and tender, but like its saucier cousin, it lacked some much needed punch which is the trademark of a good curry.

We ended with a masala dosa £11.95 came last with mustard seed potato – the whole thing looked mightily impressive with its long cone shape. But I found it greasy and the side of sambar and coconut chutney tame.

When did I go? Aug 2018
The damage: Expect to pay £40 per head with a beer
The good: The chilli onion rava dosa was sublime and so were the pre-meal snacks.
The bad: I couldn’t help but to feel disappointed after eating here, fortunately you wouldn’t have to endure an average meal as the restaurant is no longer there. Perhaps I got them on a day they decided to be subdued. Ce la vie. You can try their Stoke Newington restaurant though. For similar money, and more thrills for the tongue you can try the delights at Dishoom, or the or the mouth-watering gloriousness at Gunpowder, never disappoint.
Rating: 2.5/5
Would I go again? In a heartbeat
Address: 6 Dering Street, London, W1S 1AD Oxford Circus
Web: http://rasarestaurants.com