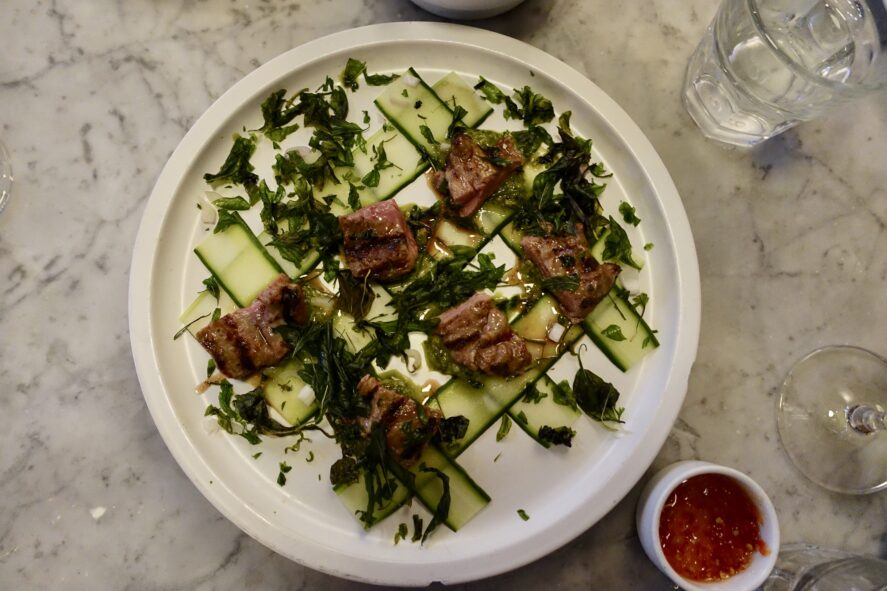 Groundhound Cafe emanated from Greyhound, an infamous Thai fashion house that opened their first Greyhound Café in Sukhumvit, a fashionable part of Bangkok. They now have seventeen across Asia and the first comes to London in January 2018. If you’re someone who will eye-roll at the notion of fusion then you might want to read another post as inside this two floored venue, they are Thai at the core, but have their tentacles firmly on the international larder. If you want to stay regional then head over to Kiln which is 10 minutes walk away, or over to Shoreditch to Som Saa or Smoking Goat – all have the common theme of British lads bringing over their learnings from travelling Thailand and injecting some big fisted flavours back into Thai cuisine in London. It reminds me of how there has been an injection of regional virtues into Chinese food in London, the bold and uncompromising flavours Sichuan in particular at the likes of My Old Place and Food House to name a couple. Regional cooking is both profoundly educational and surprises the palate with new flavours. This can only be a good thing right?

The menu looks like the dab hands of a graphic designer has sprinkled their magic onto it, paying attention to eye-catching photography, visual balance, typography, colour and contrast – they are nice things to look at, print isn’t dead!

First we lubricate with some of the delicious plonk on offer

Crab and corn pops £7.50 were the crispy snacks that came first, served with a sweet chilli sauce, similar to the sort you can buy in bottles. They were fine, but not memorable.

No idea why they called this dish weeping wolf £7.80, but a lot of things don’t make sense in this restaurant. More on that later. In fairness to them, it’s a good way to cook lamb, grilled to a char, placed on top of cucumber ribbons cross hatched on the plate with crispy basil to nibble on too. It was a decent plate of food.

Single boned wings £6.90 are not the drum part of the wing but the wingettes split in half, marinated in fish sauce and fried to a crisp. Yeah, they gave us good nibblege action whilst sipping vino – but why don’t you give us the whole wing?

Traditionally, satay are cheap cuts of animal marinated and fired over coal to get the best out of them. How they serve it here is with ribeye £7.80, a prized cut of beef with an unrestrained amount of thick satay sauce for dipping, enough to for at least 10 sticks. I’m stickler for waste. The rectangular hunks of thick, stale white toast it came with were designed for dredging I suppose.

Then came poached cod in tangy sauce £16. It tasted like something that was left in the steamer and forgotten about, it was a bit parched and underwhelming. The best things on the plate was the sauerkraut and coriander. I could think of a lot my compelling things to do with £16, like order a Five Guys.

In the same vein, the larb like “chicken holy basil bomb” £13 served over rice and a frilly edged sunny side up egg was dry as a bone and we left most of it.

The thing I got most excited about was the Phuket burger £16. A crispy soft shell crab placed on a stack made of onions, tomato and futile iceberg. To say it was lacking was an understatement – that goes for puny sized chips and som tum salad too. I just found that the insipid crab got lost in it all.

When did I go? Aug 2018
The damage: Expect to pay £40/65 per head with drinks
The good: I like the venue here, the fizz, the atmosphere. The menu is a great piece of print design too, with the layout, imagery and colours. Proof that print isn’t dead!
The bad: There isn’t anything worth coming back for, we revelled in nothing. Most of what we had was unconvincing. We even tried the spaghetti pla khem which I lost the picture for, but in the end one of the most popular selling dishes was a cruel salty slap to the palate.
Rating: 2/5
Would I go again? It would take some convincing!
Address: 37 Berners St, Fitzrovia, London W1T 3LZ
Web: https://greyhoundcafe.uk