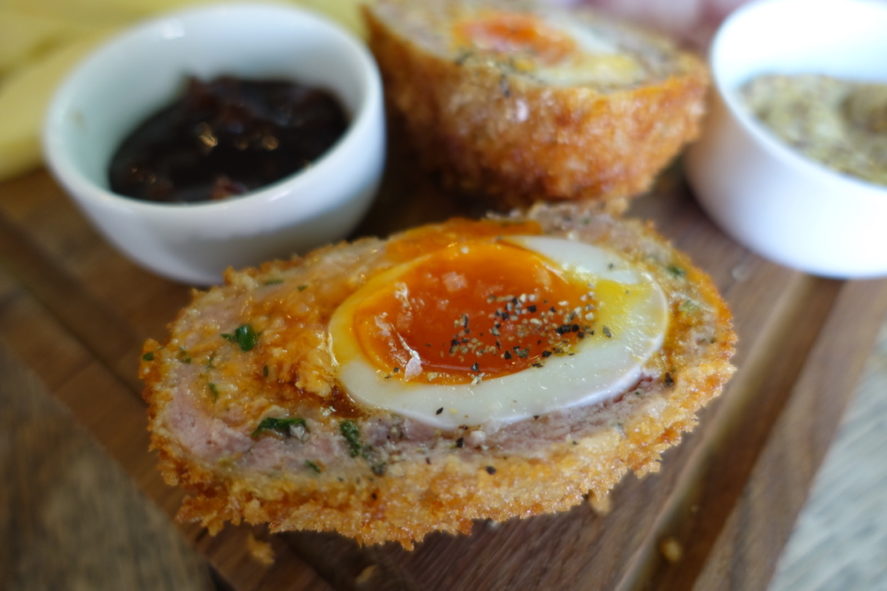 The ship is a boozer that overlooks the River Thames right by the traffic clogged Wandworth Bridge Road. You know the one, where Maccy D’s is by that hellishly busy roundabout. They’re been doing their thang since 1786, and it seems to be one of those famous landmark pubs that everyone descends upon when the sun shines. When we arrived midday’ish, it was already heaving. Queues were building fast and doormen with arms bigger than the average mans’ legs did well to manage the huge throng of shiny 20 and 30 somethings wanting to come in. If you don’t get claustrophobic, then you probably will develop the condition as it gets utterly rammed to an inch of its life. I’m not sure if I’ve come to a nice riverside pub, or an Ibiza club where human Tetris is a thing. Bear that in mind when the weather is nice and you want some alfresco action. Solace and personal space can thankfully be found inside where we’ve come to play.

We get decent butter – that’s a start, but where’s the sour dough? We get aeroplane food grade bread instead. Gosh I’m pompous.

We start with their Ploughman’s Sussex-Charmer £14.50 it’s a platter of greasy pork rillettes, pink pickled onion chunks, grainy mustard and apples sliced into discs exposing their star shaped core. It also came with a sharp cheddar and a sour dough as advertised that was more akin to a brioche, in fact it was brioche a duff dry one at that. The bread isn’t their strong game here, especially when you get sour dough and brioche confused. The best thing there was the scotch egg, the golden yolk was cooked to the perfect place of runny and set. The pork filling was herby and peppery, the crisp overcoat was exactly that – crisp.

My main was the slow cooked pork belly. Shamefully, it was parched as was potato fondant it was nestling on. A suet dumpling was plonked on top with a long strip of crackling wedged into it. It looked like it was a helicopter ready to fly off, I wish it did. Instead I rummaged around to find some good things. The red cabbage was textureless and the sauce which could have been its saviour, had the depth of a shallow puddle, in spite of its dark colour. I left most of it to die on the plate in embarrassment.

The boss got the fish of the day, it was advertised as cod, but somehow they thought cod was bream. Well that’s what it tasted like and looked like, even with its headless body. It was actually quite nice with it’s samphire and cabbage, albeit a bit boring.

At least the buttered jersey royals £4.50 with chives were nice.

The others had other bits including crab, I couldn’t comment on how it tasted as they didn’t want to share.

When did I go? May 2018
The damage: Expect to pay £35/45 per head with drinks
The good: The scotch egg, that was good. But look, it’s a popular place and people want to come here in their hoards to have a good time and why would you turn them away? It’s a business at the end of the day, why should they care if it takes 45 minutes to get a round and 20 minutes to get to one side of the terrace to the other. Personal space is not a notion here. That’s enough of my moaning about how packed it gets outside. I wished that was where we ate though as the burger shack were shifting some very good looking burgers that smelt great along with some look-at-me curly fries.
The bad: The food and the 45 minute wait for the drinks at the bar with the booze sodden-sticky-floor was not cool. The barmaids looked stressed beyond belief from the 8 deep crowd that surrounded the bar like a human horseshoe.
Rating: 2.5/5
Would I go again? Meh
Address: 41 Jews Row, Wandsworth, London SW18 1TB
Web: https://www.theship.co.uk