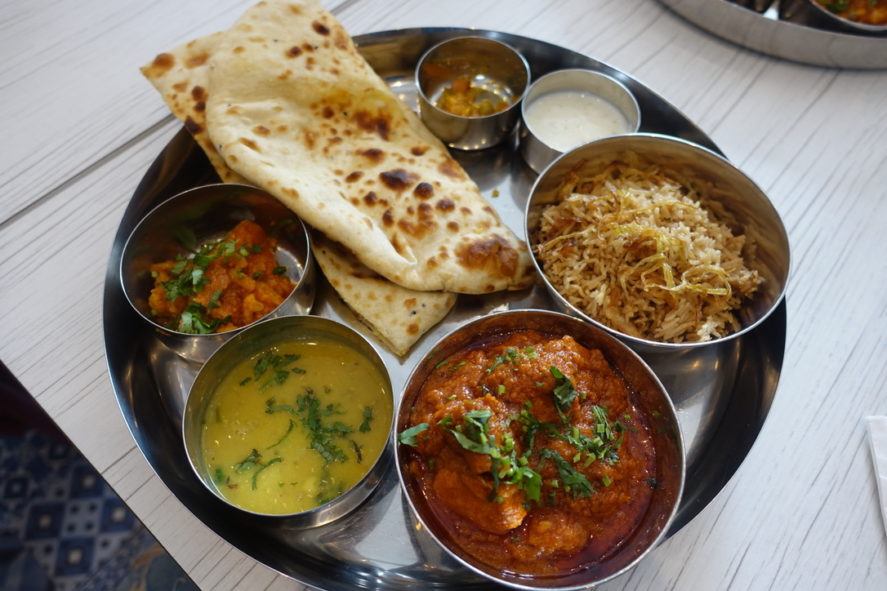 After putting on my Sherlock Holmes hat, I found out that Thali Ho was a ten-year plot between two brothers, Shamim and Shah Malek before they finally unleashed in to riverside town of Surbiton. They are local lads who wanted an Indian Kitchen that recreates dishes out of recipes handed down from their parents and grandparents. The story in itself is nice, who wouldn’t like a schtick like this? They opened in October 2017 and have won awards year in year out from the Asian Curry Awards 2017’s “Best Casual Dining Restaurant, London Suburbs”, presented by Greg Wallace himself. One of the brothers Shamin said in an interview with a local publication that “The advice I would have to anybody who’s a restaurateur or chef would be to serve food that you would actually eat yourself with your family — food that’s cooked from the heart.” I can’t argue with that sentiment so here I am at their 100-cover restaurant. Inside, there is enough bare brick to even put most places in Shoreditch to shame. Sunlight at either side of the restaurant lights the venue up which is a cross between Wahaca and Nandos.

I’ll never turn down popadoms if offered, ever.

To get the palate going we ordered veg £3.75 and lamb samosas £3.95. They came with a dip with an unmistakable sour jostle of tamarind. They were crispy and hot as you’d expect, but what let them down was the filling, both in flavour or lack of in this case and quantity. There was no spicy radiancy there and they didn’t have me reaching for another or asking for more.

So onto the thali’s. What are they I hear someone ask? It directly translates to “plate” and in this case, it’s a “round platter used to serve food in the Indian subcontinent and Southeast Asia. Thali is also used to refer to an Indian-style meal made up of a selection of various dishes which are served on a platter”. You can thank wikipedia for that.

I went for the Gunpowder chicken thali £13.95. With it comes a dahl, vegetable curry and rice. What the immediate let down was, apart from the chicken curry itself, was the lack of temperature in the dishes. Another minute or two on the stove would have given the food some oomph. That being said we got rice that wasn’t oily, it was greasy and the vegetables were missing that warmth of spice to really give them some character. The peswari naan was less-than-lovely too as it tasted cold owing to the time it had to rest in the kitchen before it got to us.

When did I go? Mar 18
The damage: Expect to pay £20/25 per head with a drink
The good: I love the concept of the place, especially in a place like Surbiton where good places are lacking. Our server was lovely too, the guy had a constant smile around his chops.
The bad: Crucially what the limp food lacked was gusts of spice and personality. I wanted to grab the brothers by the collars and say I REALLY want what you cook for your friends and family, the stuff that really speaks to you and slaps me into a food coma after I’ve frenzied on all of the roasted aromatics and spices you get in Indian cookery.
Rating: 2/5
Would I go again? No
Address: 31-33 Brighton Rd, Surbiton KT6 5LR
Web: http://www.thali-ho.co.uk