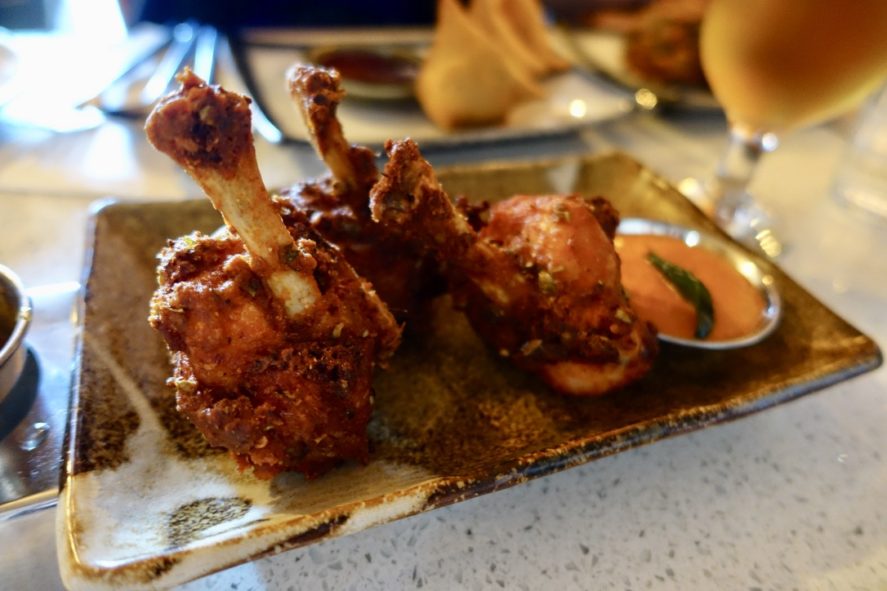 There is something nicely poised about Dastaan in the very unassuming part of Surrey called Ewell. It mingles with a bunch of unassuming shops that you’ll typically get on a suburban high street overlooking a traffic thronged A road. Quite boring really! The team comprises of Chef and owner Sanjay Gour who worked with Angela Hartnett in Dubai and then as a pastry chef at Angela’s Michelin gilded Murano in Mayfair – that gave me a culinary horn as I love the place. After chatting with him after our meal, he mentions that he has also done stints at Tamarind, a place I’m less enamoured with after a duff meal there, but also Zaika and Gymkhana, which I’m yet to dine at. During both visits, they were heaving so I’d suggest booking. Inside you get honeyed walls, seal grey panelling, faux marble wipe down tables and some banquette seating opposite a semi-open kitchen. Above all, the mouth dripping, ripe aroma of roasted spices and tandoori smoke fills the air. That’s my happiness right there.

We start with a poppadom basket £3 and a tray of what tastes like homemade pickles £2.

Then comes the pani puri £11 which are hollowed out crisp semolina shells filled with spiced potatoes, chickpeas and mouth-puckering tamarind chutney. Spiced water fragrant with mint and coriander can be poured in at your will.

Dahi puri £11 is more of the same, but it gets a good lacing of lactic yoghurt and more lip puckering tamarind chutney. Life is good right now.

Chicken lollipops £7.85 are the wing drums from the bird which are spiced and fried until a butch fiery crust is formed. They can be made even more intense with the potent chilli and tomato chutney dip on the side.

Duck and guinea fowl sheek kebab £8.95 is expertly moulded on a long skewer so that they can be fired in the tandoor oven. The result is a deeply salty, spiced meaty snack that demands to be eaten with the soothing apple muraba, as eating it alone may give you cardiologist a field day from the salinity.

Beetroot tikka £5.50 is fine example of a crisp shelled bit of deliciousness to an otherwise muddy tasting vegetable. The acidic tang of yogurt and mint chutney boosted with tamarind gives it punch and moisture.

Lamb chops £14.95 are another abiding memory of the meal, they were genuinely wonderful with their tandoor char and succulent flesh. The USP here is the bitter kasundi spiced mooli that I’ve never eaten before.

Mixed veg bhajiyas £5.50 are golden as they should and are filled with spinach, potatoes and onions, spiced in a manner that let you know about it. More of the same mint and tamarind chutney is there for freshness.

Keema matter £11.55 is the type of dish that reminds me of one of my very first memories of eating Indian food when I was still in single digits. My mate’s mum used to make him keema sandwiches at school – my mouth drooled every time I could smell them. She eventually taught me how to cook it, so eating it anywhere else does encourage expectation. Ok, so this memory is less thrilling, but it was delicious example of what a keema should be.

Pork vindaloo £10.25 came in a thick stew of masala hoisted with the heat of Goan spices. A nice spikey kick of vinegar was a welcoming element that gave the dish a ballast of flavour. The power of sour.

Butter chicken masala £9.75 was probably the closest thing you’d get in your local curry house, but it was nothing of the sort. Well at least what I’ve had anyway. You get a thick, creamy tomato based masala with the heft of cream. It’s spicy broad shouldered version of what I’ve had before.

Aubergine curry £7.50 also gets a good dousing of thick masala sauce and spices that permeate your tongue. The menu item also mentions “pickling spices”, I’m not sure if they meant the stuff from you gherkin jar but it was memorable nonetheless.

Lamb biryani £13.25 was also a force to be reckoned with, they were a bit stingy on the lamb though. But maybe that’s because I got there last. Safety is in numbers I’d say.

Their naan £2.25 and peshawari £3.75 were decent too. Naan snobs would like them I reckon.

My little pile of spicy stuff.

Pistachio kulfi £4.95 is simple yet effective.

They do a good version of kala jamun £4.95 here. In essence, they’re hand rolled balls of dough consisting of grated paneer, milk powder and flour, deep fried until golden, then they get a good soaking in sugar syrup. They’re intensely bad for you, but it was the weekend so what the heck.

Daastan’s version of a falooda kulfi £4.95 was served up as a sundae. Rose syrup, frog’s spawn-like basil seeds, vermicelli and other sweat things featured. My nieces descended upon it in feeding frenzy.

Visit two was a birthday treat to me.

It would have been rude not to.

And ordering the chicken lollipops £7.85 is just good manners too.

Vegetable samosas £5.75 looked like wizards hats, dipped into the tamarind chutney they were decent snacks.

Beetroot tikka £5.50 are good, but it’s all about the chicken lollipops for me.

The mixed veg bhajiyas £5.50 are unavoidable in my family as they’ll keep ordering them.

From my experience, Indian restaurants do great things with humble vegetables. Take Gunpower’s sigree grilles mustard broccoli as an fine example of that. The tandoori broccoli £6.25 here is HOT! Probably on the overt side, but there’s cooling apple raita and a mountain of it beneath the green. It’s not really about this dish for me so I’ll dodge it next time.

Butter chicken masala £9.75 is probably the best one in Surrey.

They do a very cheffy thing with their wild mustard potatoes with curry leaves £6.95 by using a melon baller to shape them as you can see from the pic. Why not.

The keema matter £11.55 missed a trick this time around, the sauce which tasted like it got a firm hand with the double cream which made it cloying and had me done after a spoonful.

Sag gohst £7.90 wasn’t shabby from what I can remember.

One of the things they do really well here is the tandoor cooked bread. Crisp, bubbled and ripe of scooping.

Is it wrong to save the peshwari naan for desert like how I do?

When did I go? Apr 2017, Nov 2018
The damage: Expect to pay £30/35 per head for a slap-up meal.
The good: Aside from the bang for your buck, Daastan proves that you can really find solace in broad shouldered Indian cookery in Ewell out of all places. You can have a really good afternoon or evening out here.
The bad: If you live locally, then you’re got yourself a gem, it would be a mission for those who don’t have a car. The tandoori broccoli was a dud in my eyes as was the keema matter during my second visit.
Rating: 4/5
Would I go again? Yes
Address: 47 Kingston Rd, Epsom KT19 0DB
Web: https://www.dastaan.co.uk