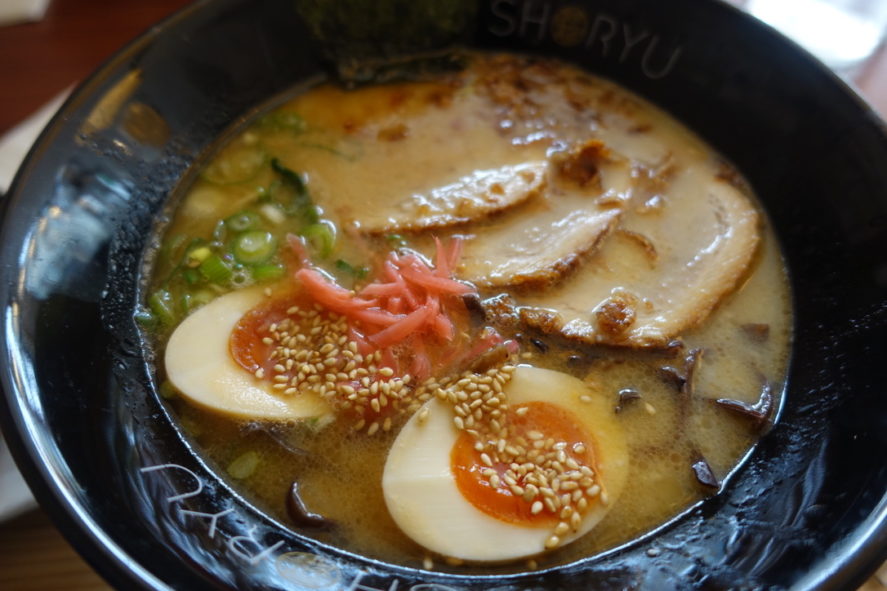 Once upon a time Soho was the place that peddled soup in noodles. Bone Daddies, Tonkotsu and of course Shoryu ruled the roost, but now they’re as ubiquitous as Ford Fiesta’s, only they taste better than a hunk of metal. Shoryu Shoreditch to my knowledge was the first ramen joint in Shoreditch – they opened in September 2017 as a 40-cover site with a high table at the core flanked by smaller tables and bar seating against the shop front overlooking Great Eastern Street. The menu is of the familiar, Hakata tonkotsu ramen, hirata buns, cocktails and sake. Shoryu Ramen by tradition champions thick and creamy broths which taste like a 12 hour indulgent yield of slow bubbling pork parts. You’ve got my attention. Forget the dirty hamburger wars of last decade, bring on the ramen wars – that said the since ramen is so established in London the wars were long-fought before this blog was written and the noodle society are all living in peace and harmony.

For my first visit here I went for the Kotteri Hakata Tonkotsu £12.90. It came with three 3-millimetre thick slices of charsu pork, expertly cut from a roll of pork belly long-simmered until its texture is almost dissolving in the murky yet luscious broth its served in. Vivid pink ginger, spring onions and golden egg yolks break up the glossy sheen of the soup. Wood ear mushrooms give some textural fun.

Since were greedy, we also ordered Shoreditch sharing platter £13. The highlight here is the goosnargh chicken breast with its crispy karaage jacket. The chicken had good tension in the texture, pleasing moisture and flavour – it’s a celebration in deep frying. The prawn tempura is craggy and crispy as it should be, but the prawns as pretty as they are, seemed tasteless. The tender-stem broccoli in a pool of sesame delivers on its promise.

With this branch being on my doorstep of my office, it’s difficult not to pop in frequently for my slurp fix. This is their chicken katsu curry ramen. It comes with a curry-soy pork broth, hunks of chicken katsu, that luscious nitamago egg, menma bamboo shoots, naruto fish cake, vibrancy of red ginger and nori seaweed.

Die hard fans might be annoyed though as they have recently taken the chicken katsu curry ramen off the menu and replaced it with a weaker sibling. It comes with a tame curry-soy pork broth, chicken katsu which is sliced and placed on top instead of hunks of the stuff soaking in the soup like the predecessor. Prawns feature as does pak choi and coriander. The quality of the ingredients is there, but owing to the annoyance of the tepid and insipid broth the bowl just becomes forgettable – it really is crying out for some depth to belt and brace everything together.

However, for me what has the x-factor is the Karaka Tan Tan Tonkotsu £13.80. In the early days of eating at Shoryu Soho, I became a regular after slurping multiple bowls of the stuff I. What you get is a heady broth punched up with the umami of white miso, the slap of garlic and the kick of chiu chow chilli oil. The protein comes in the form of spicy minced pork which sinks to the bottom only encouraging you to drink from the bowl to get to the prized bits at the bottom. It’s a cold weather therapy and much more.

When did I go? Too many times to even count!
The damage: Expect to pay £15/25 per head without drinks
The good: The quality of ramen is generally great here. The Karaka Tan Tan Tonkotsu provides genuine thrills for £13.80. That’s a whole lot of drama for not a lot of money. I always order extra nitamago eggs as my greed demands it, they are also fantastic.
The bad: Avoid the new chicken katsu ramen as it simply whimpers and does next to the Karaka Tan Tan.
Rating: 3.5/5
Would I go again? Yes
Address: 45 Great Eastern Street, London, EC2A 3HP
Web: https://www.shoryuramen.com/stores/80-shoreditch