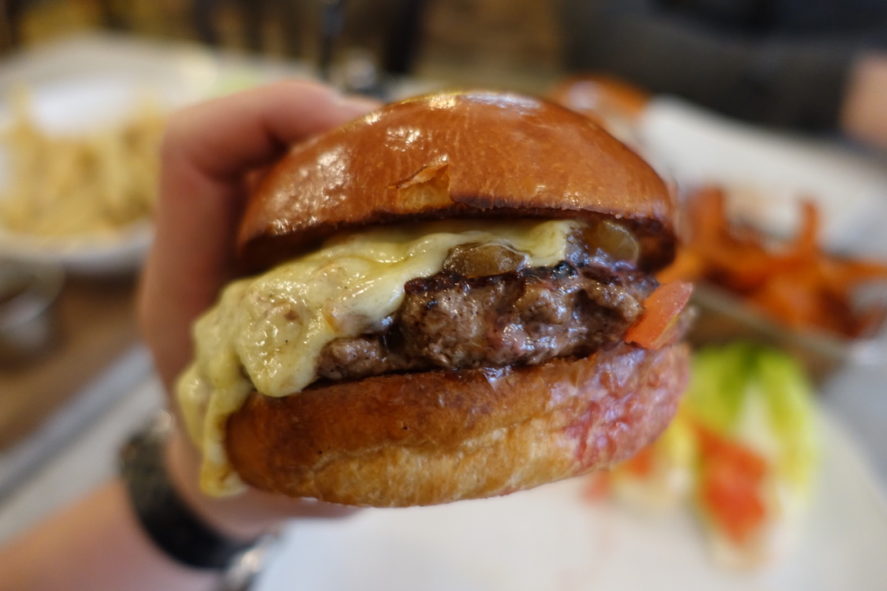 Hache Burger was founded in 2004 by Beresford and Susie Casey, they have seven sights in total, six in the Capital and one in Kingston Upon Thames, a place we call suburbia. You get brunch, coffee, cocktails and of course the thrill of a dirty burger. That’s plenty of action all under one roof. I came to their 70-cover Shoreditch branch which opened in early 2013, a stone throw away from my office to check out what they’re about. For reference, we can call it a burger joint that does chicken club sandwiches, rosemary lamb burgers with tzatziki, goat’s cheese burgers and even a full vegetarian potato rosti burger for those who missed the agenda memo.

First we get the beer battered onion rings which tasted like they were made by a chef that clearly loves onion rings. They arrive piping hot and golden brown in the deep fat frier basket it’s served in. There is a greaseless, chewy, crisp exterior, clinging onto the sweet melting onion within. Sometimes the onion shrivels up and dies inside the batter, there’s none of that here.

Sweet potato fries £3.95 come in a mini frying basket too and have a lovely rustle, sweetness and moreishness.

Haché poutine fries £6.95 as advertised come with a toping of melted truffle infused cheese and madeira jus. There is plenty of indulgent cheese but the truffle and jus went missing in action. We didn’t complain and gobbled the lot.

If you want table theatrics then get the steak le fume, it’s a burger with caramelised onions, smoked bacon with the sultry funk of melting gruyère served in a smoked filled glass dome as you can see from one of the earlier pictures.

I went for the steak truffle £11.50 as truffle makes everything better. More gruyère was melted on with sticky caramelised onions. The beef is a coarsely ground patty which came with a luscious maillard crust. It’s clearly been aged and they prefer to serve them medium-rare as it should be, the juice ran down my arms as I tucked in to this burger. The bottom half of the brioche bun is a shade of afterbirth pink gained from the soaking of meat juices – it becomes a multiple napkin demolition.

The second time around was with a seven man brigade.

All seven of us ordered steak le fumé’s, but the ill equipped kitchen only had two domes on the premises, so we had steak a la zero fumes. Oh well, it didn’t deter us from ordering it and the burger was decent enough, the smoke was more show than go anyway and didn’t detract us from hunkering and inhaling the lot.

The onion rings were love handle cladding as ever and all the more delicious for it. The same goes for the poutine fries with cheese and jus and the truffle that went AWOL.

There is teeth squeaking halloumi fries if you fancy it too with a creamy dip £5.80.

During visit 3, we came on a Friday night, do the same if you want to feel the bustle

Sipping something cold and crisp with your burger is a must isn’t it?

The sweet potato fries and onion rings are the best sides you could ever order here don’t just take more word for it, see for yourself.

Salt and pepper crispy squid £4.95 were crisp and soft in most of the right places, albeit very greasy in parts, some leaked oil on the bite.

Creole chicken wings £9.95 had a nice sour chilli kick to them, the flesh seemed to glide nicely off the bones into our greedy gobs.

Brussel sprouts £4.50 were halved and fried until their edges become a frilly chestnut brown full of intense nutty notes – a side of ranch dressing was not to my taste but can provide lubrication if you fancy it.

Nachos £7.40 came with guacamole, sour cream and salsa. My 8 year niece makes better when we binge on Netflicks. Just saying as I expected a bit more X-Factor than stuff kids make at home. I sometimes condemn myself for having these silly, high expectations. But eating it becomes a grind.

I’m a huge fan of Asma Khan’s cooking after eating at the delectable Darjeeling Express of Kingley Court, so when I saw that her collaboration with Haché was on the menu in aid of the Lotus Flower charity I had to get it. It was billed as the “Bengali Chop”, a full vegetarian item which was my calling after an excessive Christmas. It stood proud and was ready to be dispatched. What came was a dry vegetable patty with a deep back-hit of soil, the same stuff you pot my plants with. From what I gathered it was compressed strands of beetroot and perhaps carrot that could have been pulled out of the compost heap. The disk of aubergine it came with was also dry and tired, needless to say I didn’t go in for seconds. The roasted turmeric brioche bun was no better; it crumbled in my fingers like the stale bread we all fed to the birds as youngsters. I scratch my head and leave 90% of it, they call it nice, I call it agony.

Redemption came in the form of a waist thickening salted caramel brownie £5.95 with an ice cream that tasted intensely of vanilla.

And we returned during the Government’s eat-out-to help-out scheme whereby diners get a tenner off their bills per a head. It was a great way to boost the hospitality sector which suffered horrendously during the pandemic. Hache was the only place in Shoreditch that could get us in after wondering for what seemed like forever to get our bums on some seats. We’re grateful for that.

Here’s their steak cheeseburger £10, I cannot comment on how good it was but the lucky man who ordered it left behind only a few crumbs.

I went for the steak Calabria, it’s named after a place in Sicily right in the toe of the boot. It’s safe to say that this burger is a whimsical twist on an Italian burger if there’s such a thing, then this is it. There’s a spicy nduja, a sort of pungent sausage paste boosted with dried chillies and smoked paprika – when it’s good you’d want to spread it on everything. Except that it seemed to overpower the beef, it was too rugged. There’s cavolo Nero, but it’s undercooked and almost rubbery, sharp provolone cheese features too. Everything is held together with ciabatta that felt like the sole of a plimsole, a cold one at that, that’s only worthy as something to remove from the plate so there’s room to try and salvage the rest. It’s fair to say that this burger is a waste of calories.

After an hour of waiting our sides of rosemary sea-salt frites, onion rings and sweet potato fries arrive, ice cold. We sent them back, only to get more cold ones – we gave up and left most of them.

Arancini £6.50 tasted like fried cheese with rice, it lacked the depth you can achieve with the slow-care, ladle by ladle action in a good risotto which is the main ingredient of an arancini. If you take it for what it is then your expectations are set.

Tepid and chewy Creole chicken wings £7 can’t be anyones idea of a good time which is exactly what these were. A cream based sauce with roquefort doesn’t help nor does the strident puddle of orange sauce the wings came in.

When did I go? Mar 18, Apr 18, Jan 19.
The damage: Expect to pay £25/45 per head with drinks
The good: At the first roll of the dice we got impeccable burgers – very tidy examples of the breed, they were fine moo in a bun as are the onion rings and sweet potato fries. Come here for those and some cool beer for a good time.
The bad: The leaky squid rings and the nachos from the nursery were questionable but the Bengali Chop clearly belonged in the compost heap, it was an insult to burgers. Also, the restaurant clearly shat-the-bed during the rampant eat-out-to-help out scheme, I don’t need to mention the tepid sides and how long they took to arrive or the terrifically bad Calabrian burger. If I were the chef under these conditions, I’d be screaming expletives in every language I know. But I can’t help thinking that during normal times they will be firing once more, just like the first time I ate here.
Rating: 3/5
Would I go again? Benefit of the doubt?
Address: 147 Curtain Rd, Hackney, London EC2A 3QE
Web: https://www.hacheburgers.com/locations/shoreditch/