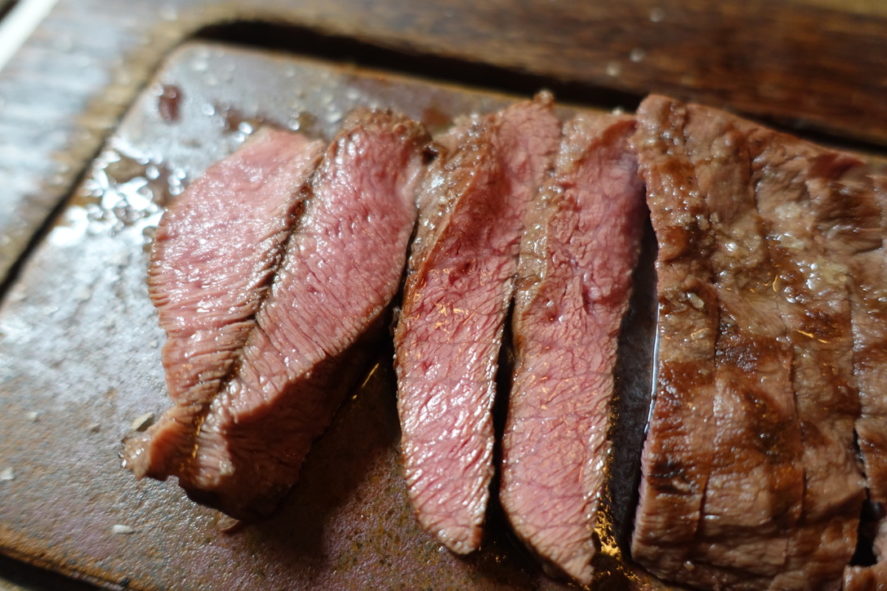 Charlie Carroll is behind the roaring success they call Flat Iron. After a stint at Wahaca, he went out on a mission to prove to London that steak doesn’t have to give you a nose bleed every time the bill arrives. How do they do this? Well, they don’t use expensive well-known cuts such as fillet, t-bone, sirloin or ribeye. Instead they use a cut known as the ‘flat iron’ which is butchered from the shoulder blade. Aptly, it became the restaurant’s name and the mantra is serving up a steak for only £10. The restaurant first appeared in 2012 as a pop up above the Owl & Pussycat pub in Shoreditch. Within the same year, they opened on Beak Street in Soho. Now they have nine sites! Each restaurant isn’t a clone of one another, they have their nuances. For example, Shoreditch, where I’m dining, has a wood-ember rotisserie: Covent Garden comes with a butchery, an ale-maturing fridge and an ice-cream counter. In and amongst the rustic-industrial chic of the restaurant, chalkboards tell you about the breed of cow and what it’s been fed that ultimately brings the flavour.

We lubricate whilst we wait for our table – be mindful that it’s a no bookings restaurant.

Here it is in all it’s carnivore loving glory. They say it’s sous vide, then its flavour fortified over coals. Charlie says “….it’s technically the second or third most tender bit of muscle on the animal, after fillet and the teres major.” I say sous vide anything and it will be tender! But credit where credit is due as the glistening pink beef, served on a piece of brown slate is a marvel.

I love the mini cleaver that comes with it, not only is it good for aesthetics but it works too.

In the same vein as the steak, the sides all served on blue rimmed enamel plates are another diehard conviction that simplicity wins over complexity. The best out of the sides is the roasted aubergine with tomato, basil and parmesan £4.50. It’s sticky, full of umami and tastes the best.

Dropping chips, batch #128 £3.50 are scraggy, crispy and all about the fluff in the centre, they are deeply moreish.

Market greens £2.50 are purple stemmed broccoli anointed with butter, they’re very tasty and cathartic which can only be a good thing.

House leaf salad which all the steaks come with are lambs lettuce with a honey mustard dressing.

Beavertown blood orange IPA £4.50 tasted like exactly what it says on the tin.

The steak is a beautiful thing.

Of course we got wagyu fat fries £4.50 with freshly shaved truffle £2.

Market greens £3.50 were either asparagus or shredded cabbage. We got both for health benefits.

The roasted aubergine. It has boss levels of umami with salt, fat and cheese caramelised in all of the right places. I can’t endorse it enough.

Feeling self-indulgent on the day, we ordered another steak. This time we went against their recommendation of going mid-rare and demanded one that was rare. What we got was a beautiful looking steak, but it was torturous eating it. I’m not sure if it was down to the cut being along the grain or if cooking it medium gives it the tenderness. Either way it was a £10 mistake. Ho hum, it could have been a whole lot worse.

When did I go? Nov 2017 and June 2018
The damage: Expect to pay £20/30 per head with alcohol
The good: One way to guarantee that I’d love something is do it really good and make is very cheap. They do it right here and they do it well. The steak is obviously very juicy, tender and wants to be inhaled. The roasted aubergine is deeply indulgent and will sustain you through a dark winters night or for the afternoon in the summer like how it did for us.
The bad: The second steak I had during my second visit was a duffer, read it yourself to stop me repeating myself.
Rating: 4/5
Would I go again? Yes
Address: 77 Curtain Rd, Hackney, London EC2A 3BS
Web: https://flatironsteak.co.uk