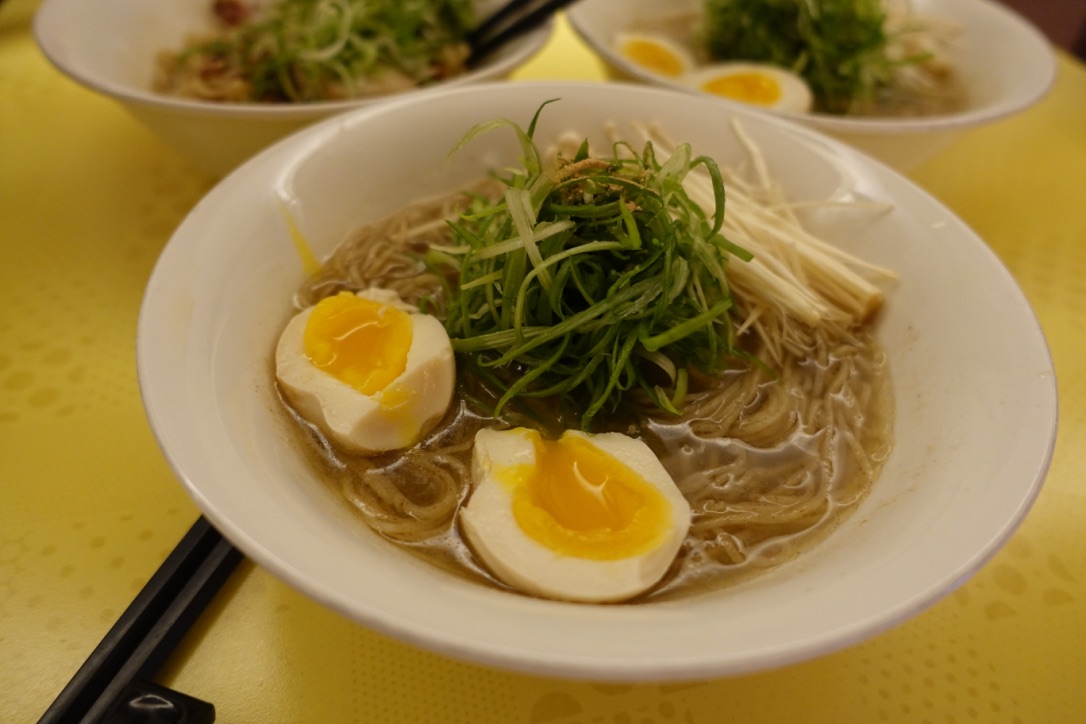 Ivan Orkin is a self-confessed Japan nut, having moved to Tokyo shortly after college to live and breath his fascination of the country. There he met his interior designer wife, took on the role as a house-husband, before he became the first American to open ramen shops in Tokyo (2007 and 2010). Ironically, he didn’t know what he wanted to do before this, but had a passion for ramen. “I just want to make deeply flavored ramen and noodles from scratch,” he says, “and that’s all.” Inspired by Japanese chefs who learnt their craft in culinary school in France, who returned to Tokyo to cook French cuisine, he aimed to bring his ramen odyssey to NYC. After the tragic earthquakes and tsunami in 2011, Ivan decided that this was the right time embark on this journey. He opened Ivan Ramen Slurp Shop at Gotham Market West (600 11th Ave.), to be followed by a stand-alone Ivan Ramen (25 Clinton St.) opening on the Lower East Side in 2013. So onto the food… The Croyden cream ale was lovely – it’s great to see craft brews on the menu. I have no idea if it’s from Croydon or not. We kicked off with toasted garlic caramel, togarashi (Japanese chilli pepper) wings with shiso ranch sauce $13. The skin was lovely and crisp, but that’s where the goodness stopped. The ‘toasted chilli caramel’ was meek and the ranch dressing clashed. I have high hopes of wangs, I adore them, especially in Smoking Goat form. They are the litmus test of good wings, but these stumbled a bit. Tokyo Shio ramen was big’d-up by our waitress, which came with a sea salt, dashi-chicken broth, pork belly, soft egg, enoki mushrooms and rye noodles $16. I couldn’t wait to try it. I must confess though, it was, and I hate to say it plain Jane. The soft egg and texture of the ramen had a great chew, but the flavour, or lack of it wasn’t a thing to behold. (Sigh). It was very subtle with a rumour of smokiness. Contrastingly, triple pork mazemen in a puddle of tonkotsu broth, with a garnish of pork belly two ways and wheat noodles, was a class act. The umami, chilli and sweetness was all there and regrettably we didn’t all order it! When did I go? Nov 2016
The damage: Expect to pay $30ish (£20ish)
The good: Ivan’s story is a compelling thing in itself and that triple pork mazemen is the one to have.
The bad: I was a wee bit gutted that the infamous Shio ramen that Ivan had been cooking for over a decade was underwhelming. I reckon the kitchen was having an off day.
Rating: 2.5/5
Would I go again? Yes to try different bowls
Address: 25 Clinton St, New York, NY 10002, USA
Phone: +1 646-678-3859
https://www.ivanramen.com