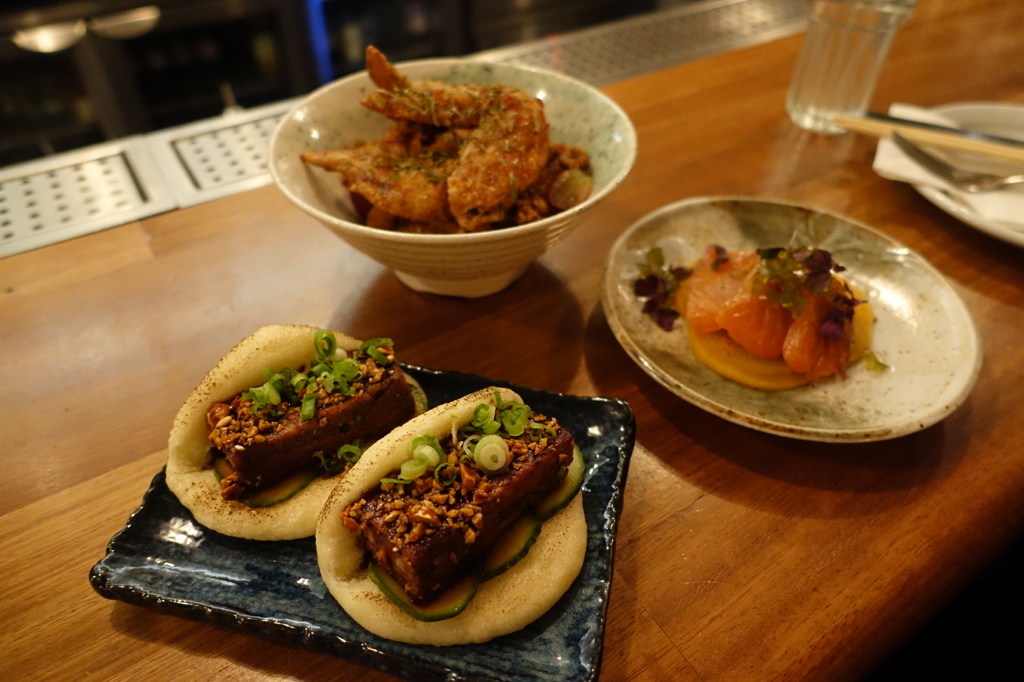 Bó Drake has been in the Soho food scene since February 2015 and it brings East Asian flavours to a 60 cover no bookings Greek Street venue driven by British seasonal ingredients. Dishes come with a splattering of fermented, pickled, BBQ and smoked techniques and the restaurant is run by Jan Lee who learnt his trade at Roka. Lee was brought up in the Scottish borders where he was heavily influenced by his parent’s restaurants, his Chinese heritage, trips to East Asia and of course the cuisine of South Korea where his wife originates. At the helm is Head Chef Heath McDonald. Things kicked off with this jar of lightly pickled daikon (£3) – they were awesome. Smoked rib stack – Korean pear and BBQ sauce £11. Succulent and slides off the bone like a sock with good seasoning from the smoke too. Korean lamb cutlets with nashi pear £13. They were a beautiful pink hue inside and that deep sticky sweet sauce exuded all the qualities of a deeply rich reduced sauce. Sweet potato fries with a side of kimchi aioli £3.50. Hot and crispy fresh from the fryer. Rib eye £15 from the specials board. I rated this dish – the beef was full of deep flavour and cooked to a wonderful rare – the sear on it was spot on. The spirits selection isn’t shabby at all. Cured salmon sashimi, miso, beetroot and camomille £8.50. Somehow the curing mellows the oiliness of the fish and brings out the flavour more which matches well with the sweet earthy beets 2 ways. There was the sliced yellow variety which is nestling on top of it’s puréed purple cousin. KFC – Korean fried chicken wings with soy garlic, grapes and rosemary £9. Fresh from from the frier so the exterior is super crisp and the interior puffs steam as you bite into them. They are a personification of unhealthiness and deliciousness! My only grumble is that the kitchen didn’t include the drum part of the wing which is hands down my favourite bit. Pork belly bao – confit New Hampshire belly, pickled cucumber and soy glazed cashews £10.80. What I love about this dish was the quality of the pork which had the perfect interplay of fat and protein which was cooked to a velvety tenderness. The cucumber added the all important acidity for balance and this is one of the reason why you should come here. Kimchi pancake, edamame and mozzarella £9. I’ve eaten a lot of kimchi pancakes in a variety of different restaurants and most of been totally alluring. This one reminds of something you might want to eat inebriated as your taste buds have taken a flattening from a huge consumption of booze in order to fill a hole. As that’s what cold and insipid food is good for. (It tasted stale too). Sweet potato fries, kimchi island dressing £4. The thick gloopy sauce overwhelmed the fries which I can imagine would have been lovely and crispy if had they’ve separated. If you like sweet potato fries order these but request the sauce to be on the side. Smoked rib stack – smoked with sweet-chestnut wood and Asian BBQ sauce £15.50. I found these dry, uninspiring for the taste buds and they were left relatively untouched. It’s a shame really as ribs shouldn’t be like this. The verdict:
When did I go? May 2015/Sept 2016
The damage: Expect to pay £30-£50 per head with drinks.
The good: It’s a lot if fun eating here as the food reflected some really good ideas and combinations that work really well. The bao here are a must as is the KFC and those profoundly delicious lamb chops should feature again soon I hope!
The bad: My first time here certainly managed to hit quite a few high notes and so did the second time to be fair but more inconsistently. The ribs on the second visit were are far-cry to how good they were the first time and that kimchi pancake should be avoided. Island dressing should not be in any human’s 5 a day either so ask for your sweet potato fries without them as they are delicious without it.
Rating: 3/5
Would I go again? Yes
Address: 6 Greek Street, Soho, London, W1D 4DE
0207 439 9989
http://bodrake.co.uk