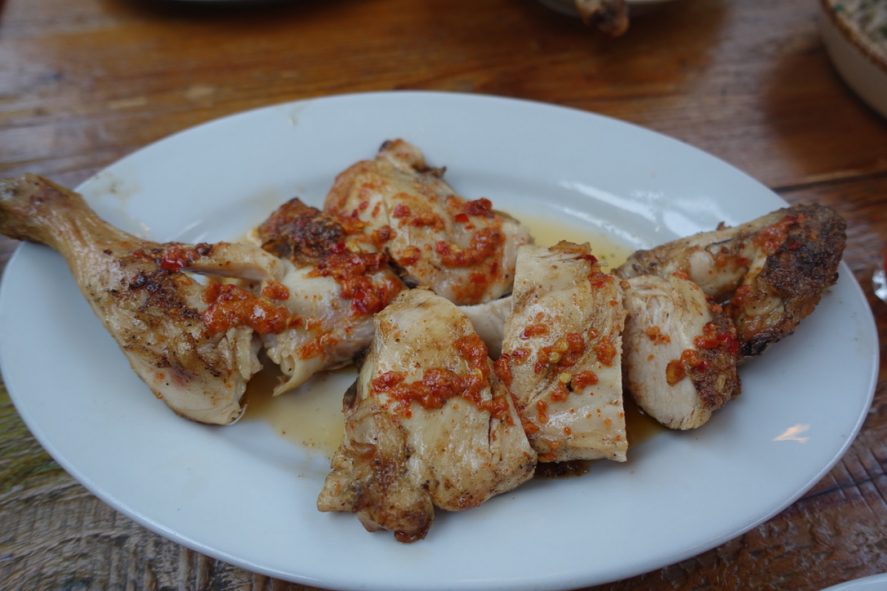 Open since July 2018, Casa do Frango brings Algarve style piri piri chicken to the streets of Southwark. It’s a stone throw away from the tourist trap of Borough Market and makes use of an old engineering works right above the delightful Native. Inside you’ll get lush plants, rustic bare brick charm, sunlight comes through huge reclaimed windows and an arched panelled glass ceiling – it’s a stunner of a place. There’s even a hidden cocktail bar that feels very date-night-ish if you fancy it. Frango which means chicken in Portuguese – it’s the star of the show and its fired over coals, Algarvian pitmaster Lucidio da Fonseca Monteiro comes over to SE1 especially for this gig. You can have a choice of three marinades, piri piri, oregano or lemon and garlic. I hear people say it’s only chicken, but they make the locally sourced humble bird something thrilling, a well worn winning formula, but it’s one that never bores me. When they say local I hope it’s somewhere in the Devon countryside and not from a back street of Elephant & Castle!

First came the shiny salted lupini beans came first as a snack on the house that went down a treat with the bottle of val de lobos £28.

Grilled prawns had a some piri piri coal goodness too as well as a douse of white wine and charred lemon. They stripped the prawn but left the heads on for some twist-and-suck action.

Things got really interesting for me when they brought over the African rice £5, a clay pot of buttery lusciousness full of peas, plantain, chorizo and shards of crispy chicken skin poking out like shark’s dorsal fin.

Extra sauce for the brave

The pick of the bunch was the half chicken brushed with piri piri marinade £9, and I can definitely confirm that it was everything I love about chicken. The bird tasted deeply of itself, no doubt enhanced by the coal roasting it got to intensify its flavour and to render down the skin to a crisp. The piri piri sauce as oil based with the right amount chilli that tickles the back of the throat.

The other birds of oregano along with lemon and garlic were nice additions as they were cooked in the same way, but acted in a cheer leading capacity by comparison to the piri piri.

I can never resist a well made pastel de nata and this kind for the record is sublime. Layers upon layers of crispy pastry filled caramelised custard – what is there not to bloody like? The coffee ice cream had great mouthfeel and flavour too, it was really good.

Of course I had to get another one as I’m profoundly greedy. This time with less compelling but still nice vanilla ice cream.

This was the speakeasy bar that I told you about earlier.

Of course I came back – albeit 4 months later.

Rice is an unsung hero here, it’s not just about the chicken but the rice too. The octopus £10 version is no exception – it was delightfully buttery, with translucent slithers of garlic, sweet roasted red peppers and a wedge of charred lemon brings the acidic punch.

Tomato salad £4 comes with a good sprinkle of dried oregano.

The centre of attention belongs to the chicken. Piri piri of course.

The boss went for lemon and garlic.

Pastel de nata with coffee ice cream £5 is my weapon of choice.

My third visit was straight from The Whisky Show just over the bridge in Old Billingsgate – and I tell you what, eating here after a whole day of drinking whisky was heavenly.

The delightful bacalhau & chickpea fritters £6 got us ready to become the chicken eating mercenaries.

It turns out that they do a potato and sour dough bread here £4, it’s no surprise that it’s the good stuff. We get a soft lacy dough with a deep bark crust. Marvellous.

Pork belly ribs £8 tasted triple cooked, soft and unctuous in the middle and crisp on the exterior. Tomato, cauliflower leaf, watercress and red onion is dressed in what tastes like a honey vinaigrette – salad like this makes London a better place.

We like food with health benefits so the tomato salad £4 with oregano sprinkles is a must have.

There’s something about the octopus rice £9 here, order it and see for yourself.

And there cheerleading lemon and garlic version £9.

Pastel de nata with ice creams £5 – one of the profound joys of eating here.

But what is this about? Someone gave up on giving me a proper serving of coffee ice cream. Sinful!

When did I go? Aug 2018, Oct 2018, Sept 2019.
The damage: Expect to pay £25/35 per head with drinks
The good: Chicken like this makes our city a better place and it won’t even punch a hole in your wallet. In my experience piri piri is the way to go. That said, the sides here have plenty to say for themselves – take the octopus rice salads and that sour dough bread for that matter, they are some of the main selling points of eating here. I come here to take the world off my shoulders and I always walk away with belly rubbing happiness. Come and see for yourself.
The bad: Zero to report.
Rating: 4.5/5
Would I go again? Hell yes!
Address: 1st floor, 32 Southwark St, London SE1 1TU
Web: https://www.casadofrango.co.uk