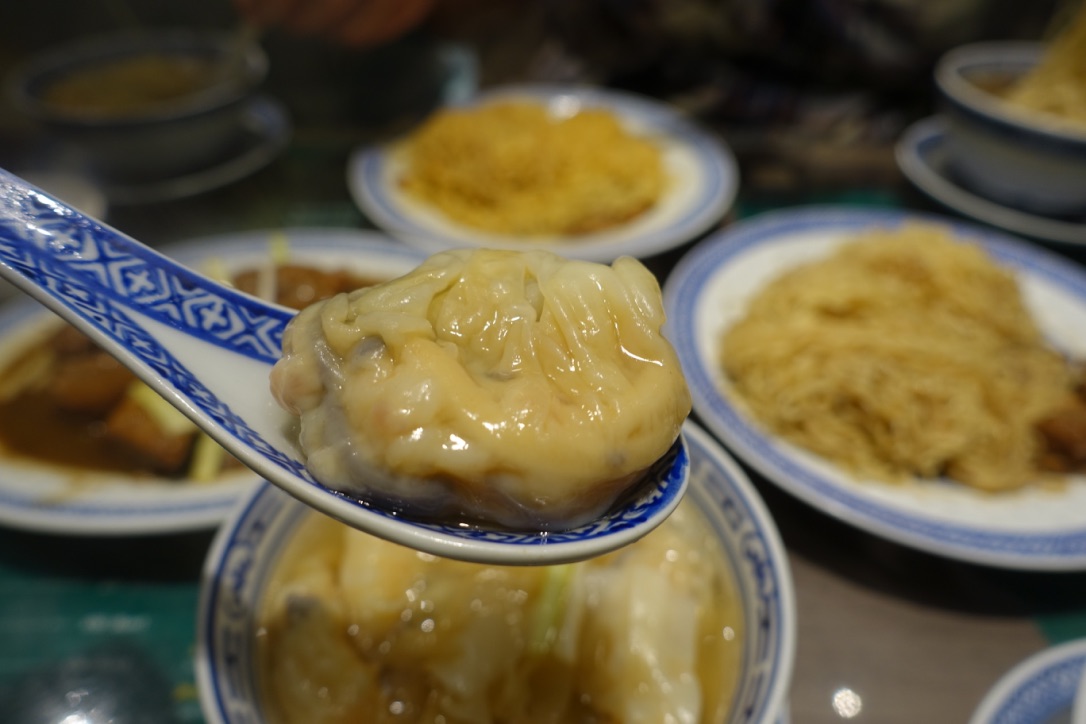 Mak’s Noodles’s has it’s roots derived from Guangzhou, brought over by wonton master Mak Woon-chi, which is now run by his third-generation descendant Mak Chi-Ming. The Mak’s are now in multiple locations around Hong Kong, Mak Chung Kee, Mak An Kee, Mak Siu Kee, and Mak Man Kee, all opened by descendants of the original Mak. Won ton noodles is another one of those quintessential Hong Kong meals which is totally unmissable, and with Mak’s reputation, it was a no brainer to dine here. In my experience wonton joints in HK can be mum and pop shops that are ropey to look at, with really good food. Mak’s isn’t like that at all, it’s probably the nicer ones I’ve been to. First up we have “stirred noodles with minced pork sauce” $58, which came with a bowl of clear broth, fragrant from the chives it came with. The pork had a lovely fermented savoury character and the noodles were al-dente to the level of crunchy from every bite. In a good way of course. Next up we had “stirred noodles with beef brisket” $58, which came with hunks of melting fatty meat on top of the same al-dente noodles. Everything was done well, but the brisket, was missing that deep flavour profile which I’d had elsewhere. More aromatics and seasoning would have made all of the difference. The same tender brisket and wonton noodles can be had in broth for $44. Prawn wonton noodles $44 is a classic and a must have. The silky skins contained a whole prawn seasoned with sesame oil, white pepper and texture came from little nuggets of crunchy water chestnuts. A side of beef brisket and tendon $99 was the third and final instalment we had of their beefy ensemble – but I was hopeful of something deeper and richer, instead it was just the same as the previous. A tad tuned-down. Vegetables in this instance were kai-lan $32, which were blanched just enough to keep all if its integrity. This was a clean tasting dish, with only oyster sauce as seasoning. To be fair, the bitter sweet greens were perfect with it. I couldn’t help snapping the chef on the way out! When did I go? Nov 2016
The damage: Expect to pay $138 per head for what we had (£13ish)
The good: The whole experience was subtle, subtle portions, subtle flavour and subtle impact. I did loved the stand out pork dumplings though, but everything else just needed a bit more oomph. Don’t get me wrong, it was far from terrible, but easily forgettable.
The bad: The brisket which is a staple in wonton joints, was crying out for the magic of more aromatics and seasoning.
Rating: 3/5
Would I go again? I’d like to try other branches.
Address: 77 Wellington St, Central, Hong Kong
Phone: +852 2854 3810