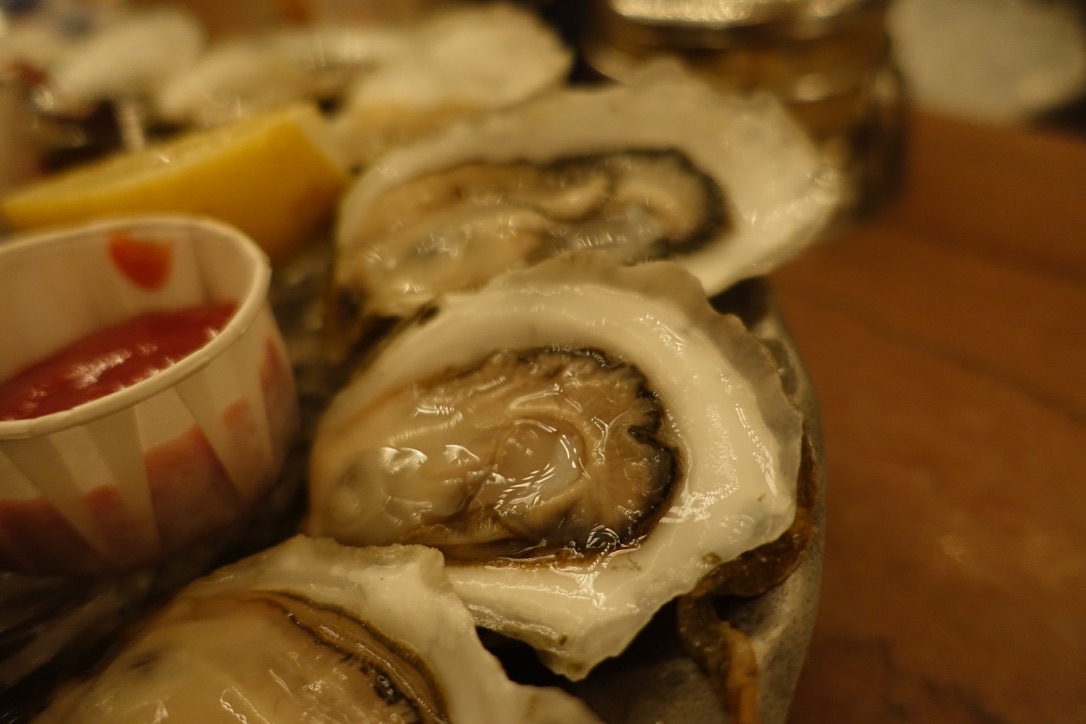 The Oyster Bar is situated in the lower level of Grand Central Station and for those who want to know, it has been around since 1913! The station itself is an engineering marvel and people flock here to check it out, it’s a great thing to look at whilst you’re on your way to get a slurp-on with some of NYC’s finest local molluscs. The menu though, isn’t just about oysters, as there’s lobster, catfish, grouper, red snapper, arctic char too, to name a few. All cooked in a variety of different ways. We here for what the place is famous for though, the oysters! The soaring ceilings above the concourse have beautiful zodiac engravings. The venue itself looks like it has been largely untouched by time, but still has heaps of aesthetic appeal with the gorgeous patterns formed by the tiles on the high curved ceilings. The inside and outside is a grand work of art and I can imagine the Edwardians enjoying those briny oysters all those years ago, just like us. Oysters and stout is a highly revered combination I heard, so I went for The Oyster Bar’s own brew with a mixed dozen. Dare I say it, I’m not stout expert but the stuff was really good. Similar to Guinness but more malty. We went for a 3 way oyster mix, King Caesar & Island Creek, both from Massachusetts and some Watch Hill’s from Rhode Island. All were succulent, briny and delicious. When did I go? Nov 2016.
The damage: Expect to pay $20ish for half a dozen oysters and a beer. (£15 roughly)
The good: If you don’t mind playing the tourist then get your yourself down here, as the oysters, shucked right before you are great. It’s refresing to see such historical continuity in a dynamic city like New York too.
The bad: There’s no daylight, the noise bounces off the wall so you might get an earful during your slurp. And what’s the ketchup about? Nothing wrong with the stuff per se, but with your oysters? Come on folks!
Rating: 3.5/5
Would I go again? Yes
Address: Lower Level, Grand Central Terminal, 89 East 42nd Street, New York, NY 10017
http://www.oysterbarny.com/