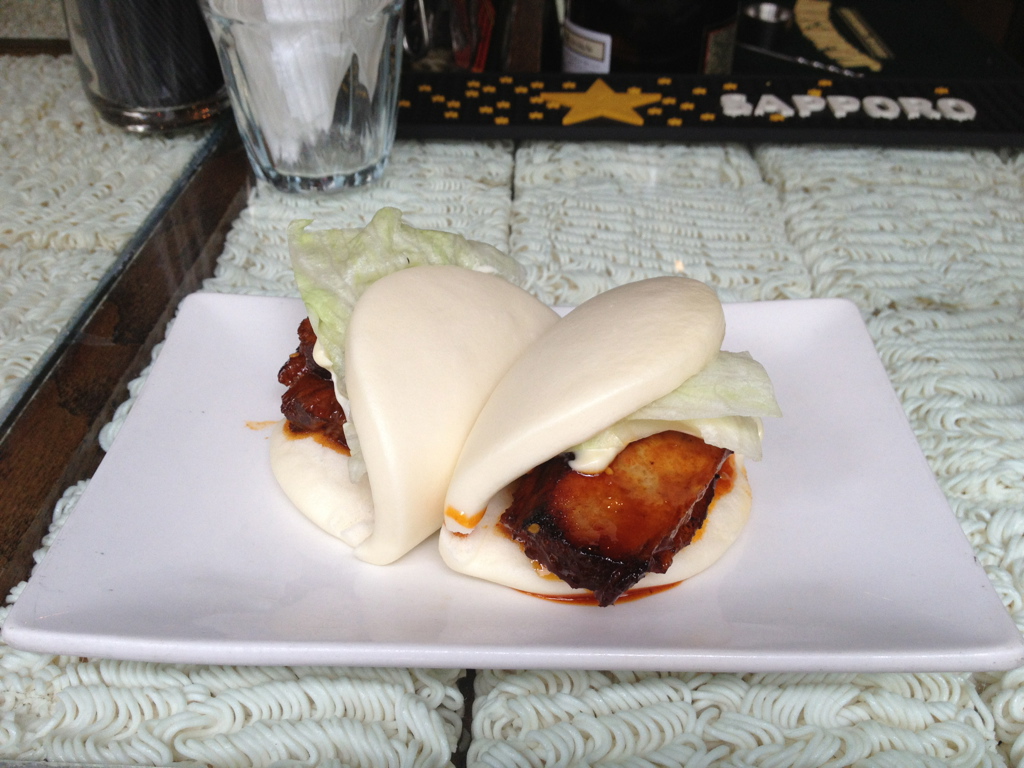 Ramen is Japan’s answer to soul food and I can get why with those delectable slowly simmered broths made from pork, chicken, beef, or indeed seafood soaking up those sexy noods. The aim is to extract every ounce of flavour to coat those noodles and off course, coat your taste buds with awesome flavour – Ippudo in the East Village which has been around since 2008 is no exception and it was heaving when I visited in May 2013 with queues galore. Whilst we wait for our table we’re seated by the ‘ramen bar’ literally. It’s a nice touch. Hirata buns with pork $9 for 2 pieces. Yes they’re available to order at the bar and I strongly suggest doing so. The reasons as to why these are so popular, is immediately obvious when you bite into that pillowy steamed bun sandwiching that tender piece of pork belly which is coated in Ippudo’s original spice bun sauce and Japanese mayo. It really is a profound sandwich and if I could inject it intravenously I would! The wait took about 45 minutes before we’re seated by a counter to the side of the restaurant overlooking the bao kitchen, along with the ramen station behind us. Those porky hirata buns were so good we ordered them again. Umami Mekyabetsu $9 – sautéed Brussels sprouts and cashew nuts in scallop umami sauce. Lemon shaped sprouts pan roasted with dried scallops and cashews? If you like Brussels like me then you will revel eating these as they are delicious, there is little else to wish for in a vegetable dish. Sammurai rib $12 – braised and grilled pork spare ribs, seasoned with soy based ‘tare’ (reduced sweet soy) sauce served with seven-spice chilli pepper. As you expect the slow braising means fall off the bone tenderness and the grilling gives it that roasted-charred flavour. The treacle-like tare sauce gives the dish a finger licking fun element to it. Karaka Miso Ramen $16. Soybean paste and silky ‘Tonkotsu’ (pork) soup noodles with Ippudo’s special blend of hot spices, topped with pork charshu, cabbage, menma (fermented bamboo shoot condiment), ginger and scallions. It was recommended to us by our waitress as most had sold out – when she said it was spicy she meant it, not only did it pack punch but also flavour. The noodles had a nice dense, chewy consistency which meant they were robust enough to take on the flavour. When did I go? May 2013.
The damage: Expect to pay $25-$35 per head with drinks.
The good: The ramen came with layers of complex flavour, it had every thing from the sesame, garlic, umami soybean, the lip-puckering richness from the pork and freshness with the spring onions. The noodles themselves had a great texture too. What really stood out were the sides, in particular those pork buns which would be criminal if you don’t order them. They had their front foot forward too with those killer-good sprouts.
The bad: The wait can be a pain the backside, however just order some hirata buns whilst you to kill-off some time!
Rating: 4/5
Would I go again? Yes
Address: 65 4th Ave, New York, NY 10003, USA
www.ippudony.com