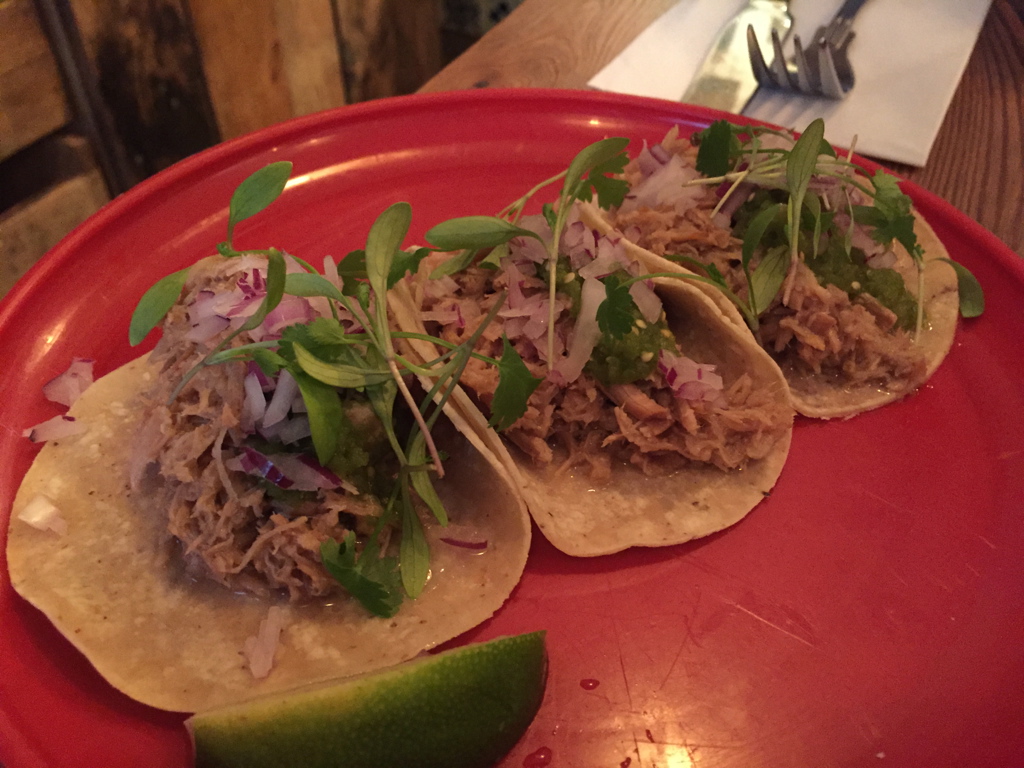 Santo Remedio comes to Shoredtich’s Rivington St in March of this year bringing a blend of modern and street food fare to hipsterville. It’s a colourful two-floored 45 seater opened by the former Head of Menu Innovation at Wahaca – Edson Diaz-Fuentes and his wife. The format is casual with an ethos of sharing small plates designed to be paired with mezcal and margaritas. I’ve since discovered though that they closed for ‘essential electrical works’ at the end of July and have remained so due to ‘problems outside of their control’ but they vow to reopen somewhere again… Dos XX £5. I find Mexican beer crisp and light along with some sweetness. This one is no exception. Classic guacamole with corn tortilla chips £6. After eating the triumphant guacamole Molé Taco Bar not so long ago this one misses the mark as it’s an insipid comparison with tortilla chips that seemed to have wilted in the sun. Or judging by the weather outside on the evening – the rain. Elote – grilled sweetcorn, a touch of butter & lime, smoky mayonnaise with Pecorino cheese £3.50. Corn is one of my top five vegetables to eat and it would be hard for me not to like this. I’d wish it was warmer though. Octopus Tostada £9.50 from the off-menu specials. Lovely al-dente octopus but the dish didn’t gel due to lack of seasoning – we were left wanting after this one. Beef Barbacoa Tacos, six-hour, slow-braised beef with chilli Ancho & Pasilla, salsa rojo £8.50. This had the right blend of heat, smokiness and acidity – the flavour wise it blew the octopus out of the water, no fun intended. Pork carnitas tacos – pork confit caramelised with orange juice & Coca-Cola, salsa verde. The beef was good was this was an elevation and the flavour was richer, the acidity deeper and it ended up being the best taco in my humble opinion. Quesadillas – toasted corn tortillas filled with artisanal Gringa dairy Chihuahua cheese, salsa verde £7. My assumption is that this cheese which comes from lovely Peckham is named after the Mexican state ‘Chihuahua’ vs the dog, nonetheless this actually tasted like something you’d cobble together in your university dorm kitchen in the microwave. When did I go? July 2016
The damage: Expect to pay £25-£30 with drinks
The good: Our front of house was lovely, she had a constant beaming smile and the food was brought out fast enough. The taco’s were ok but everything else wasn’t.
The bad: It was a hit and miss experience. I hope their new venture makes an impact as London needs more good Mexican gaffs!
Rating: 2/5
Address: n/a
Phone: n/a
http://www.santoremedio.co.uk